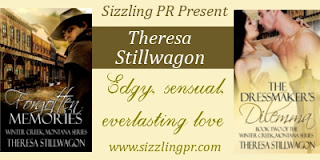 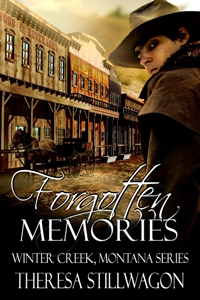 For some people ghosts are everywhere…


When rebuilding an old ghost town, a few ghosts shouldn't be a surprise. And for Jen Ferguson, history professor and psychic, it's par for the course. But ghosts aren't her main worry.


After a disastrous affair, which has affected her job at the college, Jen promised her grandfather—the most important person in her life—that she would stay away from men until the end of the semester. That's a promise she's determined to keep, but when she meets rancher Adam Craine, it becomes a struggle. Adam's sexy and flirty, and her psychic abilities are telling her that he might possess a very important quality the previous men in her life had been lacking…he can be trusted.


It's a daily battle for Jen to keep her hands off of him, but she believes she can do it…until two of Winter Creek's ghostly residents decide to up the stakes by possessing Jen and Adam's bodies. How can Jen keep her promise with these two passionate spirits interfering?


And if all that's not enough to deal with, now she's having premonitions of danger which could lead to the destruction of Winter Creek.
My Review:

Jen was a history professor with a love for two things, Winter Creek and her grandad.  She ad her heart broken more times than she could count, so she swore to use men only for sex, no attachments.  Six years later, her plan was still holding strong, that is until one really hot cowboy turns her head.   But she had made a promise to her Grandad to not sleep with any men until the semester was over.  She's fighting it hard, but  more along the lines of what he doesn't know won't hurt him.

Adam has it hot for teacher, embarrassingly so.  One conversation and he was using his Stetson to cover his growing embarrassment...literally.  It truly hadn't been that long since he had been with a woman!  After his wife left, he swore he wanted nothing more than physical relationships.  But he had been lying to himself.  Just one look at Jen made him realize just how much of a liar he really was.

Both people needed to heal from their past, though Jen had it a lot worse.  There is so much going on in the story, that it makes for an all encompassing read! The ghosts and the fact that Jen is not only psychic but can see them, add a little something more to the story.  It really was extremely entertaining and I look forward to reading the second book.  A lot of unanswered questions are floating around my head about what is truly going on.  I hope more is revealed to us soon!!  Excellent read!!

I like it and hope that you continue posting.

Let me show other source that may be good for community.

What a great review. I loved it. Thank you for hosting me on my tour.