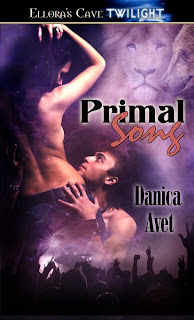 My Review:
Ok come on...Shifters that are rock stars?  How can you ask for a better combination?  Maybe chocolate syrup and a nice long thick.......You get the picture!!  :)  Do I sound corny by saying that this book rocked?  Literally?  Deputy Daisy Picou had her heart trampled on by a lion.  Lions aren't by nature loyal, so when he asked her to join his pride she basically told him where to stick it.  So lion shifters got wrapped up in a nice box and shoved in the will never date again category as she moved on with her life.  They were all the same.  So why when this big kitty comes roaring into town does her heart skip a beat?  All logic fails her and she finds it hard to breath?  And why was a woman her age acting like one of those teenage groupies that faint every time he opens his mouth?
This hometown county fair shindig just isn't Ram's scene.  They stopped playing stuff like this years ago, when they hit it big.  So why when everything looked so wrong did Ram feel so happy after they had gone through about half of their songs?  Surely it wasn't that tall drink of water in th                       e police officer uniform.  But how can he deny the rush he felt when she was close or the way his eyes seemed to follow her as she went about her job. Or the way he scent called to him like nothing ever had before.
I really really enjoyed Ram's character.  He was the silent watcher that took in all of the details and made spot on observations.  He was insightful, caring, observant, and quite romantic.  The total opposite of the lion Daisy had fallen for before.  But Daisy was fighting against him hard.  She's convinced that small-town life would never suit him and that he would never settle down.  Ram has quite a fight on his hands, but definitely believes Daisy is worth all the effort and more.  This was quite a spectacular read and I was tearing up at the end!!  This is defiantly going on my to -read-again list!!!

Thanks for the great review!

Wonderful review, Nikki! I agree with you! I really enjoyed this one. :)
I loved what Daisy's parents did to her and Ram!! Hilarious, but effective.