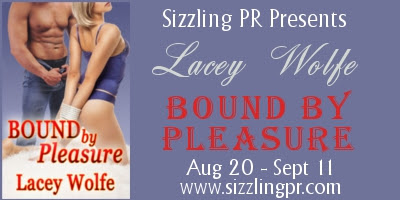 Today I am sitting down with one of my characters from Bound By Pleasure, Dawn. She isn’t the main heroine of the story, but she is the best friend to Megan and she got to watch everything from the sidelines.
Lacey: Thank you for coming today Dawn.
Dawn: No problem. It’s a pleasure to be here.
Lacey: Megan is your best friend and she was not a submissive before. However, now she is. You’re already in this lifestyle. Do you feel like she ever would have ventured into it if it wasn’t for you?
Dawn: Eventually she would have. Megan is a natural sub. Even though she fought Greg some along the way, it was in her all the time. Sometimes it’s nice to just give up control and put yourself in someone else’s hands to take care of you.
Lacey: You knew both Greg and of course Megan before they met. When you heard Greg needed a new sub and you set up the interview for him with Megan. Did you know you were making a match?
Dawn:  Let me clarify, I only knew Greg in passing. He was unique however and different. He doesn’t socialize much with other Dom’s. In fact, he is a very private man. Megan keeps to herself as well. She spends hours a day locked away in her office writing. So to answer your question, yes, they certainly seemed right for one another. And, I think it’s worked out perfectly for each of them, don’t you?
Lacey: Oh yes, I do.  Megan has finally opened up.
Dawn: Yes! And I am so glad. That poor girl needed to learn to express herself.
Lacey: Near the end of Bound By Pleasure, you met Greg’s mentor and Friend Jay. Megan says she think she saw sparks between the two of you. Anything you’d like to share.
Dawn: Well, I liked him. But ultimately that’s up to you, Mrs. Wolfe.
Lacey: When you’re ready Dawn, let me know. As we learned, its been awhile since you were in a relationship.
Dawn: Yes, but I’ve been watching my dear friend Megan and I think I need some playtime as well.
Lacey: Maybe we can work something out. 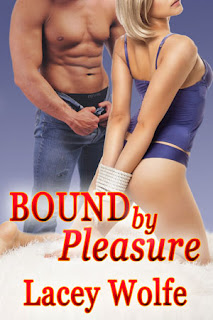 
Excerpt
Turning off the car, Megan grabbed her purse. She quickly checked her makeup and hair in the rearview mirror. It was now or never. Taking a deep breath, she climbed out of her car and headed for the front door. The house was gorgeous and the yard was well taken care of. Once she made it up the stone walkway, she saw that the door was ajar. Strange.
She pushed it open and called out and was greeted by a deep voice that echoed from somewhere in the back. He directed her to go to his study which she would find to her left.
Well, she had made it this far, and he knew she was here—there was no turning back now. Once again she took a deep breath, and she made her way to his study. The door was closed when she found it, so once inside the room she made sure to shut it back.
Megan couldn’t believe the sight of his office. It was in complete disarray. Not one bit of organization. There were half started paintings on canvases scattered here and there, and piles of paper stacked on the bookshelves and desk. Perhaps it was best to get out of there. She couldn’t understand why Dawn had recommended him. This was not what she’d expected at all.
Right as she was about to leave she heard the doorknob jiggle. Her eyes widened as she wondered what to do next. Should she meet him on her knees? Or simply take a seat in a chair since this was only an interview? She opted for the chair and sat just as he walked in.
It took every ounce of Megan’s self-control not to let her mouth drop open when she saw the man who presented himself in front of her. Once again, this was not what she had expected. In strutted a man in loose, ripped jeans and a baggy t-shirt. He had sandy brown hair that was long and tied back in a ponytail. His eyes were crystal blue. A gorgeous smile was plastered on his face as he took a seat directly in front of her on a bar stool.
“You must be Megan,” he said.
“I am.” She had no idea how to address him or what to say.
“I apologize for keeping you waiting.” He reached over and took a piece of paper from the pile on his desk. “I looked over your application, and I see that you only have a little experience in this lifestyle. Have you ever had a Master?”
“No,” she responded.
Greg’s eyes drifted up and down her body. If she wasn’t feeling self-conscious before, she definitely was now.
“Is something wrong?” he asked.
“No, why?”
“You have to be honest with me or else I won’t even consider you. Trust is very important in a relationship such as you’re wanting to enter into.”
Taking a deep breath, she blurted out, “To be frank, you’re not what I was expecting.”
He chuckled. “Continue.”
“You’re so laid back, your office is not organized, and well, as I said, you are not what I was at all expecting.”
“Tell me then, what were you expecting?”
“A businessman with a powerful job.”

I've never tries any but I think I would be willing to try it all.
Congrats on the new release. This book sounds fantastic. Can't wait to read it.

This book is going straight on my wishlist!! Hot with what looks like a great storyline!

Hmmm, my poison would be... Heck I'd give them all a go, never know what you like or dislike until you've tried any/all..
Between the character interview, the blurb and the excerpt, I can't wait to read this book!
cms72023(at)gmail(dot)com

Unless I completely trusted them it would have to be something that can be broken out of. If I had complete trust and faith in the person I'd be willing to try any ;)

Yes, Yes, and Yes! I love it. My DH does it very well. Always looking for new things to use.
mel
bournmelissa at hotmail dot com

I would probably be up for trying any ;-) I would think that I would really like ropes and cuffs/straps, but with the right Dom (one I could completely trust) I would be open to trying almost any of them.

I love reading about it.. But not 100% sure if i would try it or not,If i did i think scarves it would be.
elliott2668 ATyahoo DOTcom

Loved the review/interview. As for my bondage choice - I believe I would be comfortable with any as long as I trusted my partner.

I'll take any and all, although I prefer scarves (they're sexier).

I think I would prefer to bind someone else than to be bound myself.

I agree with Kelsey..scarves are sexy

they all intrigue me. :D

Hi everyone! Thank you for all the entries.
I'm with most of you, I enjoy reading and writing about the lifestyle, but not sure I could actually be a part of it. I don't take well to be told what to do and when to do it. :)

I don't like to be bound but wouldn't mind to do the binding! hehehe scarves or something soft though...no rope.

I think I would tray any of them with someone I trust... They all sound intriguing :D