Giveaway and Tour Kickoff for Stuck by Sascha Illyvich 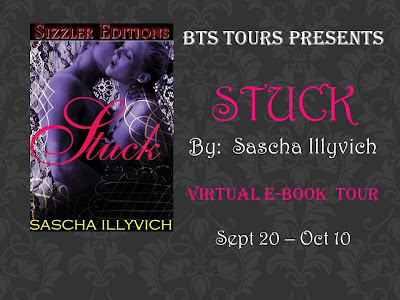 Happy Hump Day my Naughty Readers!!  Today I have the sexy Sascha over here kicking off his tour!!  So sit back, relax and let's talk music.  I'm always curios as to an author's taste in music and if it helps write he book.  Surprisingly, a number of writers have a soundtrack to their book.  Here is Sascha's:
Anyone who knows me knows I write to the heaviest, hardest, hottest in metal and aggrotek.  If the music isn't passionate, I can't write to it.  The folks who arranged this tour asked me to start off with a playlist for one of my stories and since I had one queued up for an upcoming release entitled "Finding Eternity" out soon from Sizzler Editions, I figured I'd go with that, and the why.
1.      Seven Lives by In Strict Confidence – This was actually the song that inspired the story.  My hero is hunting, searching, trying to fulfill his destiny.  Little does he know, his mate has been hunting too and knows the chorus to the song because she's his.
2.      Closing Eyes by In Strict Confidence – I just love this song and it fits in musically
3.      Emergency by yup, you guessed it, ISC – From Katherine's POV, she's in pain because Solan won't recognize the love they share.  It's an emergency of the heart.
4.      Cloudkicker's entire album BEACONS – Damn thing is just solid.
5.      I want your blood by Combichrist – Dark, BDSM, controlling
6.      Destroy Everything You Touch by Ladytron – Not really dark enough for the story BUT for the characters it worked.
7.      Clouds over California by Devildriver – Solan figures it out
8.      Momentum by VNV Nation – I used this to set up the last BDSM Scene between human and vampire
9.      He had been Old in the Beginning but He was saved  by Miroist – Long song title eh?  Yeah, thing is, this Djent song has ambience and for me, that heavy djent sound lets me stay in the story longer.
10.  Schopenhauer's Fallacy – Miroist – same as above, only a quicker tempo let me feel the urgency of what Solan needed to do for Katherine before she died.
There you have it.  Lots of emotion, lot of heavy.  Lot of power, that's how I write as a male romance author.  Let's take a look at the book details: 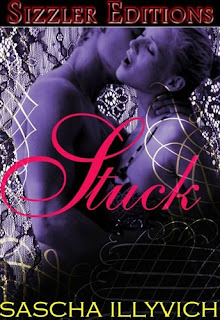 Kandy is a young, free spirit. Not afraid to live life, she pushes her body and soul to the limit, hitting all the loud metal concerts, knocking back drinks with the best of them, and coming home hung over to Ian Richards, the man who has taken her under his wing since she came to live with him after her parents died years ago.
Of course, Ian has a past too. He and his ex-wife parted on friendly enough terms, but he still feels guilty for their breakup. It seems to him that his sexy little roommate, who happens to be nine years younger than him, was a part of their problem. Only, his concern for her seemed fatherly until she comes home one night after a Slipknot concert and decides to seduce him. After all, she's old enough.
For someone her age, she's wise beyond her years, which even Ian can give her, but still. Can Kandy show Ian that in order to grow, he has to get his priorities straight? Can he get out of his head and let go of the past long enough to see just what he has under his nose? Or will he cling to memories of the past failures and remain stuck?
https://shop.renebooks.com/ProductDetails.asp?ProductCode=ILLYVICH-07
Amazon:http://www.amazon.com/Stuck-ebook/dp/B000WTFFAY/ref=sr_1_16?s=books&ie=UTF8&qid=1307716419&sr=1-16
You can follow the tour here:
Stuck Tour


September 26 Interview/Giveaway…All I Want and More


October 3… Guest Post…Reading in Between the Lines

Congrats on the release and the e-book tour. Great song list but my favorites are Closing Eyes and Emergency by In Strict Confidence.

Congrats on the book :)

Never heards any of them but will be looking into them (hopefully I can find them on YOUTUBE, but IDK...)

Becky, the youtube video I checked out first from ISC was Silver Bullets. Yasmine Galenorn and I are friends and she sent me the video to check out. Probably won't find that particular devildriver song, but you can find Beacons by Cloudkicker on Bandcamp.

Mary, yeah it plays a huge part in my longer stories. If I can't feel, or I can't trigger the feelings, I can't write romances that YOU enjoy.

I've not heard of any of these before. Time to go play on youtube.

Wow! I love the descriptions with each song. I have not heard these songs, but surely will be going to listen to them now. I am adding this one to my TBR. Great blurb. :)