Review: The Professor Woos the Witch by Kristen Painter 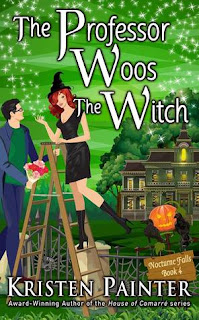 Pandora Williams is Nocturne Falls’ most successful real estate agent. And least successful witch. Her magic never has the intended outcome, but she’s learned to live with that. Mostly. Yes, it sucks, but what can she do? Then a hot new neighbor shows up and suddenly her magic works. Very cool, but very suspect. Especially since he’s a total non-believer.

Cole Van Zant likes practicality and absolutes. Things he can see and touch. So not magic. But when his teenage daughter insists she’s a witch—and they’re now living in a town that celebrates Halloween every day—he needs help. Of the witchy variety. Thankfully, his sexy neighbor buys into all that hocus pocus.

Enlisting her help seems like a great idea until spending time together reveals a supernatural surprise about who Cole really is. A secret even he didn’t know. Could Pandora and Cole really be meant for one another or is their attraction too much to believe?

As towns go....why can't this one actually exist?  I would move there without a second hesitation!  Welcome to book 4 in the latest in the Nocturne Falls' series!  We have previously had the pleasure of meeting Pandora and Pumpkin...especially Pumpkin  That delightful feline was full on in this book!  Pandora has a lot of problems with her magic which ends up making the book just that much more of a delight to read!

I love that it doesn't start of full on romance...Pandora actually dislikes Cole quite strongly at first.  It was a slow build, not rushing and instantly in love.  This was more of a unique situation because Cole has a daughter who thinks shes a witch.  The commentary will have you laughing out loud in several parts of the book!

There a few twists in the book that I didn't see coming and I love how Kristen always manages to slip one in there,  This was a light-hearted and sweet story that I highly suggest you pick up!!  I fell instantly in love!