Can Tren and Rell work together and overcome Paige’s fears in an effort to save all their battered souls? Find out in PAIGE’S WARRIORS, a Bondmates novel, from Ann Mayburn!

After a lifetime of war, Commander Trenzent has left behind the bloody battlefields of the Bel'Tan galaxy and traveled to Earth in the hopes of finding his bondmate. He can only pray that the one woman in the universe who can save his battered soul can look past his scarred exterior to the man within. Unfortunately for Tren, his potential bride is terrified of men thanks to years of abuse at the hands of her father and won't be easy to seduce.

Paige Grant is pretty sure she's losing her mind obsessing about a man who doesn’t exist. Ever since the night a wormhole opened up next to Jupiter she's had these intense dreams about a terrifying, damaged man who awakens a passion inside of her she never knew existed. Despite his grim exterior, he makes her feel safe, something she desperately needs in the real world as she fights off the advances of a man who will not take no for an answer.

But Trenzent isn't the only Kadothian warrior who believes Paige is his bondmate. An old political enemy of Tren's, Rell Thantos, also believes the sweet and shy young Earth woman holds the missing part of his soul. He will do whatever it takes to win her heart, even if it means becoming bloodbrothers with a man he hates.

The men will have to find a way to get past their anger and work together to protect Paige against an unknown enemy who is determined to keep the women of Earth out of the Bel’Tan Galaxy forever. 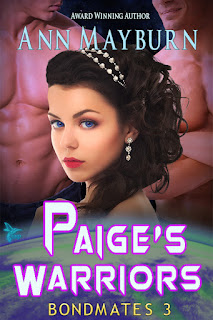 Warning- This story is set in the Bel'Tan galaxy where polyamorous relationships are the norm and love in all of its forms is accepted including M/M, M/M/F, M/M/M/F sexual situations. Basically if you don't like hot dudes kissing hot dudes, this may not be the series for you. 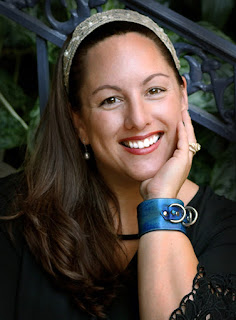 About Ann Mayburn
With over forty published books, Ann is Queen of the Castle to her husband and three sons in the mountains of West Virginia. In her past lives she's been an Import Broker, a Communications Specialist, a US Navy Civilian Contractor, a Bartender/Waitress, and an actor at the Michigan Renaissance Festival. She also spent a summer touring with the Grateful Dead-though she will deny to her children that it ever happened.

From a young Ann has had a love affair with books would read everything she could get her hands on. As Ann grew older, and her hormones kicked in, she discovered bodice ripping Fabio-esque romance novels. They were great at first, but she soon grew tired of the endless stories with a big wonderful emotional buildup to really short and crappy sex. Never a big fan of purple prose, throbbing spears of fleshy pleasure and wet honey pots make her giggle, she sought out books that gave the sex scenes in the story just as much detail and plot as everything else-without using cringe worthy euphemisms. This led her to the wonderful world of Erotic Romance, and she's never looked back.

Now Ann spends her days trying to tune out cartoons playing in the background to get into her 'sexy space' and has accepted that her Muse has a severe case of ADD.

Ann loves to talk with her fans, as long as they realize she's weird, and that sarcasm doesn't translate well via text.

Wow!  Lets start off with completely believable and plausible story line, add in 3 of my girlfriends and this book could totally happen.  Problem one:  We don't have anyone as sweet and innocent as Paige in our real-life group.  I'm probably more like Roxie and Casey mixed.  I would be completely down with this but running from it at the same time.  Guilty....I swear I have had this fantasy....lets just say a little more than is deemed normal.  I mean come on....Extremely hot and damaged guy steals you away from Earth...promises nothing but pleasure...allows other men in your bed and allows you to marry another one..plus he is a willing participant in ALL acts?  Yes!  My version of heaven and I'm not ashamed to admit it.

The story-line was great!  It was exciting, detailed, and the sex scenes were off the chain.  I loved how the author maneuvered around the height issue and just made the story work!!  My favorite character was probably Tren.  You got follow him along closely in the story and see how he developed and changed because of her.  It was exciting and heart-wrenching and I totally want a Tren of my own!!

But be warned!!!  Ann Mayburn (if you are not familiar with her work) will lead you down this long and extremely exciting road only to throw you forcibly off a cliff and laugh at you while you are glancing up at her questioningly as you are plummeting towards the ground.  I say this with much love but she kills me with the cliffhangers.  I want the next book now and knowing I have to wait is exquisite torture.  But I have no doubt that the second installment will be worth the wait!!!  Hats off to you Ann Mayburn!!  This was a wicked yummy add to a sure to be phenomenal series!!!!