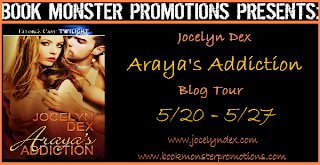 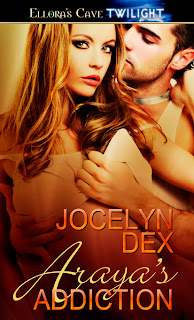 When Kean wakes up naked, collared and locked in a cell, he knows thinking with his dick has finally gotten him into trouble. Part Incubus, Kean enjoys scorching sexual liaisons, a habit that has found him trapped, forced to help a Sempire rescue her daughter from certain death.

Unwilling to aid in anyone’s imprisonment, Araya initially refuses her mother’s “gift”, but the passion simmering between her and Kean is undeniable. As they explore their shared lust, both Araya and Kean enact schemes to save each other. Their best laid plans may awaken emotions that will bind them forever.

Araya’s Addiction Excerpt
*This excerpt is HOT and for blogs with members age 18+*
Araya reached the door and the sight that met her eyes almost floored her. Through the fog of the glass shower door, she watched Kean’s muscled form beneath the flow of water, his head bent forward, one hand pressed against the shower wall in front of him. The other hand gripped his shaft. He pumped it with long, slow strokes from base to tip, sometimes lingering at the head.

His eyes opened as if he sensed her presence, and he inclined his head toward her. She wanted to close the door, but the alluring scene held her captive, her feet frozen in place. He stopped stroking himself just long enough to slide open the shower door, giving her a completely unobstructed view of the water running down his muscled body, running off the thick head of his erection.

Not only did her mouth water, her pussy ached and flooded with desire.

He resumed the stroking, faster this time, sometimes breaking the motion to slide his fingers over his balls. She saw the muscles in his arm tense as he squeezed and stroked harder, faster.

His strained voice startled her out of her daze. “If you want it, hurry.”


ABOUT THE AUTHOR:
Jocelyn was born in and currently resides in . Her preferred vacation locations are islands with sandy beaches, palm trees, iguanas, and unfettered views of clear, blue-green water.

She shares her home with her very own 6'4" alpha male and varying numbers of spoiled cats and dogs. Teaching one of her dogs to file his own nails is one of her all-time favorite accomplishments.

GIVEAWAY DETAILS: Jocelyn is giving away an ARAYA'S ADDICTION SWAG pack and two (2) $10.00 gift cards to Bitch face Cosmetics on the tour. Please include the HTML EMBED CODE below in your post for the giveaway:
a Rafflecopter giveaway

Thanks for hosting me on your fun blog!