Spotlight On: Give and Take by Alisa Anderson 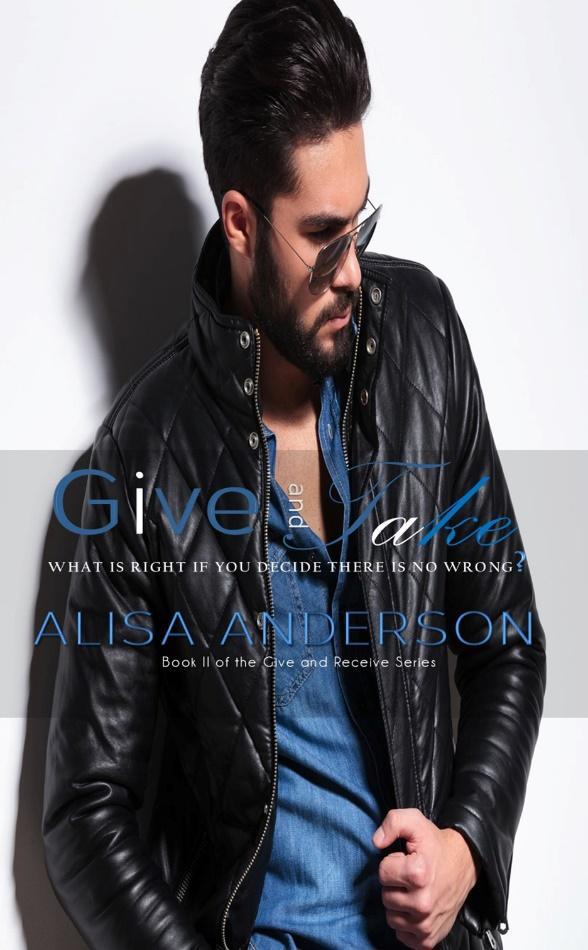 
Three friends, who struggled for fortune and fame, have finally found themselves thrust into mega-stardom.

What is right if there is no wrong…

For Ty, Lena and Danny, they're about to find out as they cross the boundaries from all things safe to an arena testing love, friendship and loyalty. An arena that's forbidden, taboo…and oh so tempting.

They’re riding hard and fast in a world where sex, money, love and rock & roll are all a game of give & receive, where any wish can be granted if you just ask...

Open, honest and raw, this is a rare glimpse of what happens behind the fortune and the fame, beyond the limelight, past the adulation and acclaim.

Alisa Anderson
well...alisa did stuff and is still doing stuff. only now she has two boys crazy enuff to want her as their mommy. hey, at least she tried to warn them, so her job is done. she doesn’t like to capitalize, partially because she likes how lower case letters look visually, but mostly out of laziness. please don't judge. it could be you. and she would say, hey. you're alright, buddy. you're ok in my book. now c'mere for a hug. the hug might be pushing it. air kiss? you are strangers, after all, with only a mutual love of poor grammar.
​she lives for a world full of controllable anatomically correct, android men programmed to meet her specific feminine needs (wink, wink, nudge, nudge with a big waggle of the eyebrows). who look like the rock. and ian somerhalder. and idris elba. and that's it she promises. variety. gotta have variety, right?
​but alas...apparently that exists only in johanna lindsey's genius mind. so until then, she enjoys her incredibly warped sense of humor. she reads tons of erotica and romantic, drippy goo that makes her heart go pitter patter. then she thought, hey. what, she said to herself. (softly, of course, so no one finds out she is indeed, 2 nuts short of a fruitcake) maybe you should write this stuff too. maybe someone will like it and maybe buy it. so she said, huh, you think? then she said, well...yeah, i wouldn't have suggested it...(inserts sarcastic tone) and then she was like lose the attitude, ok? then she was all, would you just shut up and write, already? sheesh! and she did. :)
Does your mother know what you’re reading?

Tyler’s maniacal driving, got them to Sadist in record time. He pulled up to the entrance and got out, quickly jogging around to her side to open the door. He held out a hand and she clasped it, stepping out onto the pavement in stiletto heels she threatened in the car to hammer into his head for being late.
As usual, he ignored her audacity.
And the violent threats.
She stood, noticing he hadn’t yet released her hand.
“Such a gentleman, Ty.”
He glanced at her full, high breasts, straining against the clingy, tight red tank top she wore.
“I don’t have to be.”
Lena laughed aloud, discreetly patting his crotch.
“Down, boy. Save it for when Sara takes your ass back. Again.”
“If you mention her one more time-” Tyler warned, instantly getting hard and full under her hands.
“Fine. I’ll quit. As long as I don’t hear shit about Blake.” Lena glared at him.
“Agreed.” Tyler reluctantly lifted his gaze from her chest, finally looking at her face.
“Why are you bitching about him anyway? You know you want him. So why act like you don’t?”
“Because it’s not necessary for us to rehash it,” She said, thru gritted teeth. “Now is there anything else you need to know, Matlock? And by the way, don’t think for a minute I’ve forgotten that you never actually explained anything about Danny or his divorce. Just an fyi.”
Tyler raised his eyebrow and didn’t say another word. He handed his keys to the valet and guided Lena to the back entrance.
Unfortunately, a few fans saw them, and as expected, started screaming. “Tyler, Tyler, Tyler, Tyler,” became their mantra, chanting and moving closer and closer to where they stood.
“Why am I friends with you again?” Lena sighed in annoyance.
Tyler gave her a disgusted look.
“Maybe if I gave you a reason to shut up, you’ll actually do it.”
She snorted. “Maybe you could try.”
He moved so he was directly facing her.
“Maybe I would succeed.”
She involuntarily took a step back and he filled in the space.
She suddenly felt incredibly small.
“Get out of my face, Ty.”
“Why?”
“I don’t need a reason why. Just…move.”
“Am I making you nervous?” He looked down at her, zeroing in on her lower lip caught between her teeth. It was fleshy and pink, with strawberry scented lip gloss. He resisted the urge to take a bite.
She was driving him nuts.
He licked his own full lips, as Lena watched in fascination. Then she reminded herself who she was with, her brow furrowing in annoyance.
He was driving her nuts.
Ty grinned at her. Damn him.
“No…but…your breath stinks. Yes. Your breath…has offended me.” She took another step back, using any excuse to move away from the natural heat of his body, which, she was horrified to discover, was causing her own body to do strange things.
Cheeks flushed? Check.
Nipples tightened? Without a doubt.
Wetness between legs? Absolutely.
Sheer panic at the revelation of Ty leaning in? Commenced.
Every warning bell in her body sounded off.
He was much too close.
In front of all of these people, he was actually going to kiss her.
Which was ironic. Because in the grand scheme of things, the minute Ty moved into her vicinity, everything and everyone around them faded, until all they saw...was each other.
They stood at the back entrance of the club, unaware of anyone else, when a baritone voice penetrated her senses.
“Am I interrupting?”
Slowly, Lena turned around to stare at what were always the strangest, most haunted, silvery grey eyes she had ever seen.
Her heart, perfectly balanced and safe within her chest, fell to the pit of her stomach with a resounding thud.
Of course, he was there.
That was how it went.
“Danny.” she sighed. “Fancy meeting you here.”
Three months, nine days, five hours…twenty-two minutes.
All came rushing back. Like it was yesterday.
The two of them drank, consuming each other in.
Tyler observed them both, shooting daggers at Danny.
“Hello to you too. Absolutely fantastic interception, by the way.”
“I’m sorry. I didn’t mean to.” Danny sounding amused, not sorry in the least.
“Yeah, whatever.” Ty snorted. “So do I need to make introductions, or do you two know each other?” Ty laughed at his joke.
“I guess embracing your own stupidity makes you at peace with it?” Danny’s slow, sexy, yummy, drawl was toffee rich, stroking her neck and back like a warm caress.
“Oh, don’t worry. I manage to get by.” Ty observed the chemistry between Danny and Lena.
Drawn together. Like magnets.
Danny’s eyes never left hers. “What’s up, L?”
Lena’s kitty cat almost clawed her way out her pants right then and there.
Only Danny ever called her by that nickname.
She willed her lower half to stay in her pants and plastered a smile on her face.
“How are you, Danny?” She reached up, even in heels to give him a kiss on the cheek. He bent down and at the last minute, turned. She gasped in surprised shock, feeling his tongue, his deliciously warm tongue, trace an outline of her lips.
“I’m doing good,” he whispered softly. “I’d be better doing you.”
He straightened and moved back, his mouth grinning slightly. Wickedly.
Lena blinked, momentarily struck dumb.
Gone was the bitter, angry, hostile man she saw three months ago.
He seemed…different. Lighter. Free.
Ready to stalk his prey.
Her pulse beat erratically in her throat.
“Three months, huh,” She murmured…remembering.
“Nine days,” Danny supplied, unable to look away from her.
“Five hours…” He sighed, an exhale cloaked in yearning, re-living that night.
The same way he had every night since.
Tyler rolled his eyes, looking at his watch.
“Twenty-two minutes. I remember too. But who’s counting, right?”
Lena and Danny both turned to look at him.
The asshattery of this man was truly staggering.
“Yeah. I was there too, bitches. Don’t forget that shit.”

Visit our blog too, bro ... which provides interesting news information ...

I really like the blog that you created because there are articles that are very useful for many people who have read it ... thank you