Giveaway and Spotlight on: Ashes of War by Lia Davis 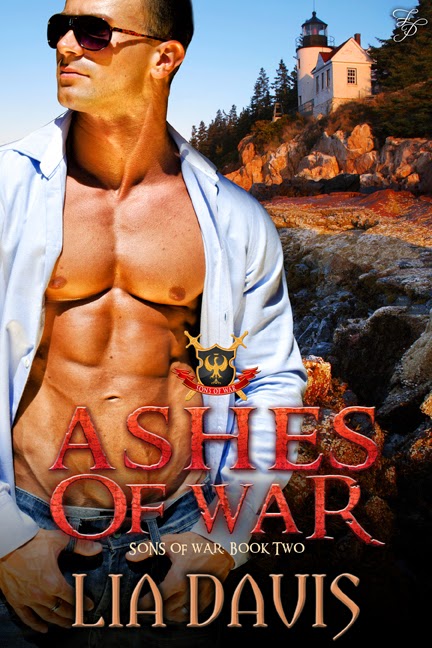 Ashes of War
Sons of War, book 2
By Lia Davis

Ashlynn Blake, minor goddess of the hunt—lethal, beautiful, and able to connect with animals on a psychic level—is the perfect person to place judgment upon an accused dragon. But first she has to prove to the gods that Ty Sullivan is innocent of his crimes. If she fails, she’s doomed to lose her heart along with him forever.
Ty’s been beaten, scarred, and betrayed by females. He doesn’t trust them, can’t stand being around them for longer than he or his dragon needs to be. Yet, when he meets Ashlynn, his dragon is ready to mate, but the man believes she’s no different than the others.
The Fates have thrown them together, forcing secrets to be told and igniting a passion so fierce it may destroy both of them.

Excerpt:
A twig snapped and he whirled to face the intruder. As soon as the redheaded goddess came into to full view, he froze and his heart pounded. Her hair hung in silky waves around her shoulders and her green eyes sparkled like emeralds. He let his gaze travel down her body. A tight black V-neck sweater and black jeans clung to her modest curves and his palms itched to touch her, to see if she was real.
“Are you going to stand there and stare at me all day?” Ashlynn stepped toward him, her expression a mysterious blend of coyness and invitation.
The dragon snapped his teeth and paced beneath his skin. A hot, dizzying rush of desire filled him. Ashlynn’s strawberry scent called to the beast, stirring a fiery need only she could calm. Every day and night she’d been gone, the dragon grew more impatient. Seeing her, being close enough they could touch in two long strides didn’t ease some of the darkness he succumbed to over the past weeks. No, being close to her raised a need within him that drove his dragon insane with lust.
The man had no intentions on claiming the female. Not yet, anyway. How did he know she could be trusted?
With a low growl to warn the dragon to back the fuck off, Ty watched her pass him to stare at the ruins. “Where have you been?” he gritted out.
She took a deep breath before answering. “At my mother’s. Healing.”
“Sounds like she lives nearby.”
She turned to look at him, brows raised. “What if she did?”
He growled and took one step forward, wrapped an arm around her waist to jerk her against him. Her body meshed into his, electrifying each nerve ending, and he tried to ignore how perfectly she fit against him. “Don’t play with me, female.”
A sensual smile lifted her full, kissable lips. “Oh, believe me, I haven’t begun to play. Yet.”

Bio:
Lia Davis is the author of the bestselling shifter series, Ashwood Falls, a mother to two young adults and three kitties, a wife to her soul mate, and co-owner to Fated Desires Publishing, LLC. She and her family live in Northeast Florida battling hurricanes and very humid summers. But it’s her home and she loves it!
An accounting major, Lia has always been a dreamer with a very active imagination. The wheels in her head never stop. She ventured into the world of writing and publishing in 2008 and loves it more than she imagined. Writing is stress reliever that allows her to go off in her corner of the house and enter into another world that she created, leaving real life where it belongs.

Her favorite things are spending time with family, traveling, reading, writing, chocolate, coffee, nature and hanging out with her kitties.

Tour-wide Giveaway:
Lia is giving away an Ashes of War fleece blanket and a swag bag pack full of goodies. Follow the Rafflecopter instructions to enter. Good luck!

Thank you so much for the spotlight!

This series is so good! I love the mix of myth and dragons in a modern age.

Hi Lia ... I just love this series and can't wait to see what happens next, wondering if one of the other brothers will take over Ty's spot as my favorite dragon ;) <3 ~Theresa

Dragon books are my favorite read!!