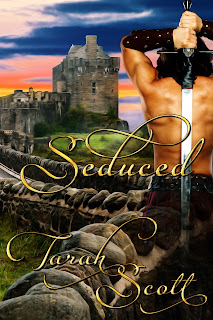 It’s a Mississippi Deputy Sheriff’s duty to bring a serial killer to justice…even when he’s a three hundred year old Scottish lord. It’s an SAS agent’s duty to save her. With each passing day, Lord Colin Morrison grows more furious...and more desperate. In three hundred years, not one of the women who shared his bed broke the spell that imprisoned him in Castle Morrison. Margot Saulnier is different. She can save him. All she has to do is give in to her desire for him. Then die.

Deputy Sheriff Margot Saulnier knows her best friend murdered her husband—Margot’s cousin—but she can’t prove it. Now, four years later, out of the blue, Cat calls Margot from Scotland and invites her to visit. Margot turns in her badge and leaves Mississippi. This time, she’ll do whatever it takes to prove Cat murdered Donny. Margot didn’t plan on falling in love with an SAS Agent—or a three-hundred-year-old Scottish lord. Now she must choose.

SAS Agent Charles McNeil is going to keep Margot Saulnier out of trouble—whether she likes it or not. He understands her need for justice, but with no proof and no authority, she’s headed for serious trouble. So is he. Charles didn’t plan on falling in love with Margot. Neither did he plan on saving her from a serial killer.

Excerpt--
“Ms. Saulnier.”
The deep male voice caused Margot to slow her walk along the east garden path and glance over her shoulder. A tall, sandy haired man approached. Blue jeans hugged long legs, and a brown bomber jacket stretched across broad shoulders. Arresting blue eyes held her gaze. Margot's pulse skipped a beat. Well, damn, Scotland was the place for good-looking men.
She stopped and turned so he could catch up with her. “Sugar, I don’t think we’ve met, but I’m glad you didn’t let the possibility of rejection stop you. Not that there’s much chance you’ll get rejected.”
A corner of his mouth twitched. “Special Director McNeil, at your service.”
Margot startled. “What?” Before he could respond she murmured, “Hicks.”
She was a fool. She’d known Chief Hicks enough years to know he wouldn’t let her walk out and not keep tabs on her.
“You’re going to get me killed,” she said through tight lips.
McNeil's brow lifted. “That could get me a discommendation.”
“A comedian,” she muttered, then shot a glance past him at the castle battlements visible beyond the trees. Who had he talked to at the office? She turned and started down the path. He fell in alongside. “Want to tell me what you’re doing here?” she said.
“Professional courtesy.”
“Bull—” The brow shot up again and she gave him a sweet smile. “You’re checking up on me, sugar.”
“A moment ago you seemed glad a stranger had the bullocks to approach you.”
His cultured tone did nothing to belie the sensual undertone in his voice, and butterflies tickled the inside of her stomach at thought of those bullocks and the matching cock. A man appeared on the path ahead, pushing a wheelbarrow filled with gardening tools, and the erotic picture evaporated. Margot cursed at recognizing the head gardener. Reports of her meeting with a man in the garden would reach Cat within the hour.
“Once Cat gets wind that the Northern Constabulary paid me a visit, she’ll know this isn’t the vacation it’s supposed to be,” Margot said.
“That shouldn’t prove a problem,” he said. “I’m not with the Northern Constabulary.”
She started to ask, then knew. “Scotland Yard.”
He smiled, and she remained quiet as the gardener passed with a sidelong glance in their direction. Margot took a deep breath and waited until they reached a branching path, then turned left.
“Look,” she said, “you’ve got to see this from my point of view.”
“Actually, Ms. Saulnier, I don’t. You’re a visiting law enforcement officer. That accords you professional courtesy—as I said earlier—but make no mistake, I do not have to understand your point of view. Rather, you need to understand mine.” He paused. “Your police chief strongly suggests you return home.”
“He’s not my police chief,” Margot corrected.
“He said you’re good, the best, but you’re mistaken this time.”
“Did it occur to you he might be mistaken?”
“I’m not in a position to judge him.”
“No, you’re not. You’re also not in any position to hassle me.”
“Not hassle,” McNeil began in a mild voice, “let’s just say I am in a position to advise. Though, given a choice, I’d prefer another position, altogether.”
She blinked. “You’re propositioning me?”
He shrugged. “How often does a man meet a beautiful Mississippi Deputy Sheriff?”
“Ex-Mississippi Deputy Sheriff.”
“Your badge hasn’t yet grown cold.”
“I doubt I’ll be here long enough for any position. By now, that gardener has reported to Cat, and she’s checking you out. By the time we're finished with this walk, she’ll know Scotland Yard paid me a visit.”
He shook his head. “Cousin Harry sent me here to investigate the castle. He’s rich as the Devil, and is interested in bringing his wife here for holiday.”
“Don’t kid yourself,” Margot shot back. “Cat will check you out—you ensured that by waylaying me.”
“Waylaying?” he repeated, voice laced with a heaping of amusement that made her want to throttle him. “Waylaying would be if I dragged you into those trees and had my way with you.”
Margot did a double take with the mental picture of her pressed against a tree, dress bunched up to her waist as his cock thrust hard and fast into her. His face snapped back into focus and she found him staring.
Heat spread across her cheeks at flashflood speed. “Cat won’t be fooled by a Scotland Yard cop showing up at Castle Morrison, no matter what story he spins.”
“She won’t find Charles McNeil on any employee list,” he replied.
“What? Scotland Yard’s cops aren’t clandestine.”
“Correct. But SAS is.”
“Special Air Services?” What kind of favor had Hicks called in? “What is special forces doing on a case like this?”
“John realized that a visit from a Bobby might compromise your cover so he called me.”
“John?”
“John Gordon.”
She gave a small nod. John Gordon, Chief Constable of the Northern Constabulary. She’d checked out local law enforcement before leaving the States. First Hicks was on her tail, now the head of the whole damn island.
Margot gave McNeil an appraising look. “That’s some favor your constable called in.”
“He’s a close friend.”
“What’d he do, save your life?”
“Something like that. So, where shall we go for dinner?”
She stared. “Are you kidding?”
He shrugged. “How better to keep you under surveillance?”
“You could simply leave me alone.”
He shook his head. “I have my orders.”
“Just what kind of uncover work do you do?"
He turned his gaze onto her “A kind sure to please you.”
Her pulse skittered, but she forced her chilly cop's voice, "You're damned sure of yourself."
“I'm a trained professional. Shell we say seven? I know the perfect restaurant.”
Margot narrowed her eyes. “This is blackmail.”
He shrugged. “All part of the professional courtesy.”
"Professional courtesy, my ass," she muttered, and wondered what Hicks would do if she sent him a thank you note for keeping tabs on her.

Award winning author Tarah Scott cut her teeth on authors such as Georgette Heyer, Zane Grey, and Amanda Quick. Her favorite book is a Tale of Two Cities, with Gone With the Wind as a close second. She writes modern classical romance, and paranormal and romantic suspense. Tarah grew up in Texas and currently resides in Westchester County, New York with her daughter.

Margot was a very interesting character.  She had a wildness about her with a bit of money and beauty queen mixed in.  Margot hopped on the right path after a terrible accident claimed a life of a friend.  After he died she decided she wanted to help people and went school in order to become a cop.  Never in her wildest dreams did she imagine her cousin would fall victim to an accident and that her best friend would suspected of killing him.  But deep down in her gut she knew without a doubt that Cat was guilty.  Even though her cousin's death was ruled as an accident, Margot was convinced that Cat had a part to play in it.  How does a swimming champion drown?

Cat had put distance between herself and the small town she grew up in.  But then Margot gets a call from Cat to visit her in the castle she now calls home.  Margot believes she finally has her chance to prove Cat's guilt and accepts her offer.  Her chief warns her not to pursue this or she will loose her job.  Margot hands in her badge and gun before she takes off.  She may have lost her career, but she can't forsake her gut feelings on her cousin death.  She believes that Cat will slip up and possibly murder again.

Margot is unprepared for what she finds in Scotland.  The dreams she has while staying there continue to grow more bizarre and feel so real.  But they are only dreams, aren't they?  As Margot continues to unravel the mystery that surrounds her former friend, she finds herself becoming more confused.  Is everything really as it seems?

This book was quite interesting and Margot was a unique heroine.  She has a wild streak that followed her from her youth, even though it was a bit more tame :)  This story was quite unique in its makeup and you will enjoy many twists and turns.  It was very when written and quite entertaining.  I can't wait for more from this author!!

WHOOOOO would like to win a signed copy of this fabulous book?  Then enter now to win!!!
a Rafflecopter giveaway