Tour Kickoff and Review of Island Bound by Kiru Taye 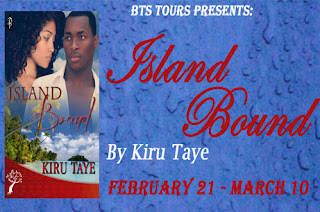 Happy Thursday Everyone!  I am pleased to welcome back to my blog the lovely and talented Kiru Taye!! I have enjoyed her several of her stories, and I loved this one as well.  Kiru has way about her writing that wrenches all the emotions out of you.  Her stories have a habit of making me tear up and this was no exception.  I have asked her to tell us about her favorite writing eras...this is what she had to say:

Hi, Nikki. Thank you for hosting me today.
I’m excited to be chatting about my top ten fiction eras.  Since I’ve only been writing for a couple of years and only written about two main eras—pre-colonial West Africa and Contemporary Africa—I’m going to focus on the eras that I love reading about.
I have to admit that I love reading about Ancient History. You can blame it all on some of the great classic movies. Ben Hur, Cleopatra, Spartacus, Quo Vadis and The Fall of the Roman Empire are some movies that I love and books that recreate those kinds of sceneries and pageantry are fantastic.
I also love the medieval era covering The Crusades and the Vikings. Think movies like Robin Hood: Prince of Thieves, Kingdom of Heaven (my all time fave. I can watch it a thousand times. J), LadyHawke, The Passion of Joan of Arc and The Season of the Witch.

So here are my favourite eras in fiction:

About Bound:
Island Bound is a sensual, contemporary romance novella, set in . It’s the story of Christy and Joshua who are on the verge of a marriage breakdown and how they get their second chance at a life together. Out 16 January, 2013 published by Decadent Publishing for their new African Ubuntu line.

Blurb:
When Christy Inemi-Spiff discovers that the man she vowed to love and honor has no such feelings for her, she’s determined to cut her losses and move on with her life. A quick, quiet divorce is all she wishes for Christmas.
However, Joshua has other ideas. He’s not ready to walk away yet, especially when he doesn’t understand why Christy wants out of their marriage. So he demands she agree to spend a quiet Christmas on a remote with him, hoping they can salvage their relationship. If she still wants a divorce after these two weeks, he will let her go. But not before he’s had his fill of her.
But with the sparking tension between them, and the secrets behind the disintegration of their marriage threatening to explode, will either of them get their wish? Or will this season of good will show them what really lies at the bottom of their hearts?
Visit http://www.kirutaye.com/booklist/island-bound for buy links 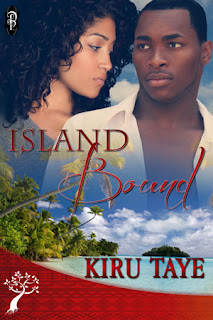 “Why are you doing this?” she challenged. Her emotions rolled, making her feel unbalanced. It had been a long three months. And it seemed like today was only going to get worse.
“Christy, you know the reason. If you stopped long enough and thought about it hard, in your heart, you’ll know.”
“You can stop this.” She struggled to contain her anger. “You started this; you can end it.”
“I know, but I won’t.”
“You, you—” Enraged, she lifted a hand to slap him.
Joshua caught her hand midair, held it tight. Before she could react, he pushed her back against the wall, pinning her to it with his rigid body. Christy felt every bit of him, his strength, and his physical nature that he never bothered to hide.
“I think I have the perfect answer for all your bottled-up rage,” he said as he parted her thighs with his leg.
“Move,” she ordered, her throat dry and croaky, betraying her increasing apprehension.
Joshua had it easy. He was a man at home with his masculinity. She had never been able to resist him. He could have any woman he wanted. Sometimes, she wondered if he had, especially during their separation. She shouldn’t care if he’d been with anyone else. After all, her goal was a divorce. Still, she couldn’t suppress the intensity of her feelings. Perhaps her anger and hatred drove the concentration of her emotions.
“We have to get a few things sorted out first,” he replied.
He moved closer, his body flush against hers; his chest crushed her breasts, his thighs pressed against hers. Though she wore cotton trousers and a tank top, all of him stroked her.
“What are you doing?” she asked as she pushed against him.
He didn’t budge. “Just trying to relieve some of your frustration. That’s what all your aggression has been about, isn’t it?”
“Rubbish!”
“Such vehement denial, when the evidence is so obvious.”
Her face stung with revealing heat as warm blood rose in her body. Mortified, she tried to move to shake him off, but only managed to get her body even more entangled with his.
Her breathing came in short snatches. She became more aware of Joshua, his hardness and heat.
“I hate you.” Her voice sounded strangled. Blistering white rage swept through her.
“You lie, sweetheart.”
He lowered his head, trailing his lips against her cheeks in a tormenting caress.
“You love me.”
Copyright Kiru Taye 2012

Misunderstandings start out from the strangest things, and as people become more wrapped up in their own wants and goals, they lose sight of whats really important.  Such is the case with our two main characters in this love story.  Joshua was an amazing man that had lost sight of why he was building his empire.  Christy was too wrapped up in her own goals to notice the whole story of what was playing out around her. Can Joshua get her to see the whole picture before it is too late?

Kiru does so well at pulling you into the emotional turmoil that surrounds her characters.  You cry with them, you curse with them, and you most especially writher in their joys.  I have enjoyed her books many times over and this newest one made tears fill my eyes.  I love the way she ends a story and no matter how short, you walk away feeling complete.  This was a great read and I eagerly await her next adventure!

Giveaway:  Leave a comment on this post telling me your favourite era to read about and enter the Rafflecopter prize draw to win a $10 eGift card in the Island Bound VBT event. Entries close on midnight March 13, 2013.

Island Bound was a great book and your review was spot on. I recommend the book too. (spiders? interesting)

I have read a number of Taye Kiru's work. And I always end up saying She is terrific! I love the Contemporary era and the' Ancient Era'.

Hi Nikki, thank you for such an awesome review. Totally made my morning. I'm so glad you loved it.

I want to read this book!
Good review.

This sounds like a good book, thanks for the review Nikki!

It looks really good. Like them all, but I really like
Ancient Africa/Ancient Egypt and
Ancient Rome & Greece too.

Kingdom of Heaven was a great movie..loved it! Awesome review Nikki and thank you Kiru for a great story..that little snippet was hot ;)

I'm on a contemporary kick right now. I go between that and England around the 1830's (i remember what that era is called).

This week I am on a Georgian & transitioning to a Old American West but SteamPunk or WeirdWest versions...

I usually read contemporary or regency. Those tend to be my favorites. However, I have recently discovered Ancient Egypt, Roman, and African (Thanks to Kiru).
Mel
bournmelissa at hotmail dot com

I uaually read contemporary or historical romance,but I am discovering alot of new genres that I would love to read.
lauratroxelatyahoodotcom

I guess my favorite historical time period is the Regency period, probably because I have read so many books set during that time. But I also love contemporary and even futuristic stories :)
June
manning_J2004 at yahoo dot com

I like reading about the future era.
Thanks for the giveaway.