Giveaway and Guestpost with the enchanting Maggie Shayne

Top Ten Reasons NOT to Fall in Love with a Vampire

10. Native soil tracked all over the house.

9. He eats all your friends.

7. French kisses result in cuts to your tongue

5. Slam the bedroom door in a huff, he just turns to mist and slides underneath.

4. You can’t even think angry thoughts without him knowing it.

All tongue in cheek of course. If you can’t get enough vampire romance, then return with me to the series that started it. Wings in the Night. I’ve just launched a brand new chapter of the series, and I’m calling it Wings in the Night: Reborn. My message to new readers is this: You may begin here.

Book 1, TWILIGHT GUARDIANS, goes on sale September 1st. I hope you enjoy it!

About The Author:
Maggie Shayne is best known as the New York Times bestselling author of more than 50 novels, nearly 30 novellas, a former soap writer, (The Guiding Light, As the World Turns,) a former advice columnist (Shayne on You,) and RITA Award winner. But what’s less known about her is that she’s been a practicing Witch for almost as long as she’s been a published author. 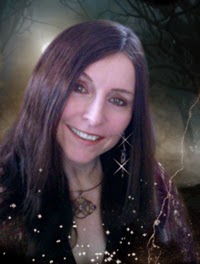 Known within the Craft of the Wise as LadyHawk the Mythmaker, Maggie studied in the Black Forest Circle Seminary for three years, earning her 1st, 2nd, and 3rd degree elevations there. A licensed minister of Wicca, Maggie was later made a Craft Elder, and co-founded a new Wiccan tradition called RavenMyst Circle. Her coven, The Coven of the Redtail Hawk, turned out five new high priestesses, several of whom went on to form covens of their own, and making Maggie, according to the Old Ways, A Witch Queen.

Maggie's "Twilight" series of vampire novels, officially known as Wings in the Night, began in 1993 with TWILIGHT PHANTASIES from Silhouette Shadows. The series concluded with TWILIGHT FULFILLED in October 2011, but has come back to life now that she has gone indie. 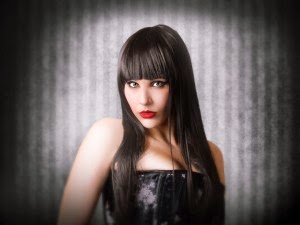 WINGS IN THE NIGHT

WELCOME to the World of Wings in the Night! You may begin here…

I am the vampiress Rhiannon. I would like to tell you how I, and my stories, came to be. In 1991, before “paranormal romance” even existed, my authoress, Maggie Shayne wrote a vampire romance short story she called Twilight Phantasies and submitted it to several fiction magazines. One responded favorably, saying they loved the tale, but had a policy of only buying from their subscribers. So if she would kindly send them the hefty subscription fee, they’d be happy to make her an offer. Maggie was not yet a published author, but she was also not an idiot. (Had she been, I would not have chosen her to tell these tales I’ve been whispering into her brain for the past twenty years.) So she decided to just keep working and the story grew into a novel. In 1992, she submitted it to Silhouette Books’ brand new line called Shadows, a line that was far ahead of its time. It was very well received, but the editor asked her to do some revising. An offer could not be made until she did, because she was so new. The revisions were mainly about cutting back heavily on a secondary character, my beloved Roland de Courtemanche, and keeping the focus on the book’s main couple, Eric Marquand and Tamara Dey. I had every intention of paying the editor a midnight visit for this insult, until she said, “Don’t cut Roland’s scenes. Save them for the sequel. He needs a book of his own.” It was in that moment that the Wings in the Night Series was born, even though the author didn’t realize it at the time. 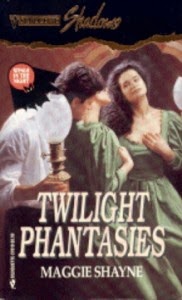 When the revisions were complete, Silhouette bought the novel for a four thousand dollar advance. Sadly, Shadows was doomed before it began. As I said, ahead of its time. The paranormal romance craze was only a seedling, just beginning to germinate, and nowhere near the phenomenon it would later become. The Shadows cover art had a comic or graphic novel look about it. It did not scream “romance fiction.” No matter. It is my belief that the line’s chief reason for existence was to help give birth to my stories. Once Wings in the Night began, even the line’s eventual demise could not stop it.

My authoress was on fire as I pried open her channels and continued pouring stories into her mind. She didn’t know where they were coming from back then. But it was an effort. When she first began my story, I was drawn as the villainess of the piece, and some weak and pathetic mortal female was supposed to be Roland’s mate! I schooled myself to patience. My authoress was just learning, after all. She did not yet understand who I was.

Trust me when I tell you, she does now.

Twilight Memories, my story, was published next, in 1994. You’ll have to pardon the blue eye shadow. It was the nineties, after all. I did finally get through to my authoress. In fact, I opened the lines of communication so widely, that I dictated the opening of the story. Those first four pages marked “Introduction” truly were my introduction to my authoress. I was speaking to her, telling her who and what I am, warning her that I am no one to be trifled with.


She merely wrote down what I said. And I’ve been dictating the stories of my people to her ever since. 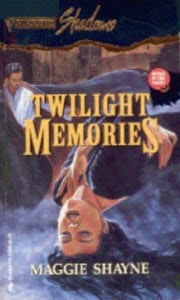 One more novel, Twilight Illusions, featuring the magician Damien Namtar (formerly known as King Gilgamesh of Ancient Sumer) and his fledgling Shannon, was published under the Silhouette Shadows line. Damien is our link to our origins, a link that continues to unfurl all the way through Book 20 of the series. But I digress.

After this book was published, Silhouette Shadows closed down. My authoress received two messages. One from her publisher, telling her there would be no more Wings in the Night. The second was from me, telling her to begin the next book right away. She listened to me, and wrote Born in Twilight over the next eight weeks. Flat.

Shadows died. Silhouette was absorbed by Harlequin. Harlequin has been purchased by Rupert Murdoch.

But Wings in the Night lived through it all, and still lives on.

My authoress has taken my advice and broken free of all of them. She will no longer allow fat, rich, mortal men to become fatter and richer from the fruits of her labor, but rather, will continue to share her gift and my voice directly with you. This also means my contact with you will be far less diluted. Less filtered. More like…a direct current.

A brand new incarnation of the series begins this year with Wings in the Night: Reborn Book One, TWILIGHT GUARDIANS will be a September 1, 2014 release in both print and electronic formats, from Maggie’s own label, Thunderfoot. And for those of you who missed the first 20 books, this is a fresh start.


You may begin here…. 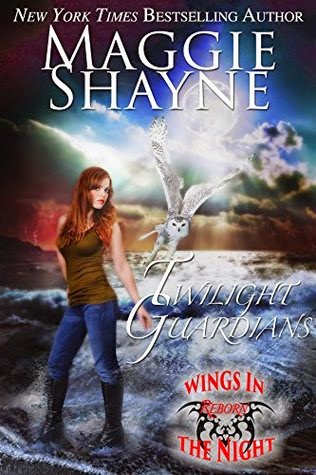 Add the book to your GoodReads Shelf

They told 20-year-old Charlie O’Malley that they had a cure for the rare blood condition that would eventually kill her–an untested, experimental cure. All they wanted in return was for her to join their elite military team and train to kill the Undead.

She took the deal, not because she cared so much about extending her life, but because it would make her strong–stronger than ordinary humans. Strong enough to kill the vampire who’d pretended to love her, taken her blood, used her body, and murdered her mother.

Killion was the last of his kind, or so he thought. When he found Charlie, he felt the pull. She had the rare Belladonna Antigen all vampires had as humans. Vampires were compelled to protect those rare mortals they called The Chosen. But with Charlie, the bond was different, more powerful than anything he’s felt before, and impossible to resist, even though surrendering to it will probably get him killed.

Ancient vampire elders Rhiannon and Roland come out of exile, risking their lives to help their mortal friend Roxy reclaim her granddaughter. But before the tale ends, their lives will be forever changed.

Join Maggie Shayne as she returns to her most beloved series of all time with this new beginning….

Wings in the Night: Reborn

Maggie is offering up a $100 Amazon Giftcard to a lucky grand-prize winner at the end of the tour, a Runner-Up prize of a new Kindle, PLUS an eCopy of Twilight Guardians for a random commenter at each Tour Stop.

Find the Rafflecopter for the Event here, follow the directions, take action, and mark as ‘Done’.

To see the complete list of tour stops so you can read some great Q&A’s, Interviews, Guest Posts and more check out the full Wings in the Night Reborn Celebration Tour Schedule HERE.
a Rafflecopter giveaway

they look like interesting reads, hope to get a chance to read them :)

Thank you for doing this write up for Maggie! I'm so excited for her new book!

Haven't read the series yet but it looks good. Adding to my TBR pile. Thanks!!

I love this series. Read it years ago

HAHAHAHAHAHA Papercut and he gets a boner. *DIES* I love this list! LOL!!!

Harvester, you are the lucky eBook winner of Twilight Guardians! Can you please email me your email address and desired eBook format to literal addiction (at) gmail.com please? Thanks and congrats! ~Chelle - Maggie's virtual assistant.