As the wolf senior enforcer, Torin Fisher’s job is to protect the pack and each of its members. That includes the beautiful submissive wolf, Cora Rivers. He’s known for a while she belongs to him, but he decided to wait for her to come to him willingly. Since her brother’s death, he’s watched her withdraw from the Pack little by little. Tired of sitting by watching her suffocate her wolf, he decides the time has come to claim her. 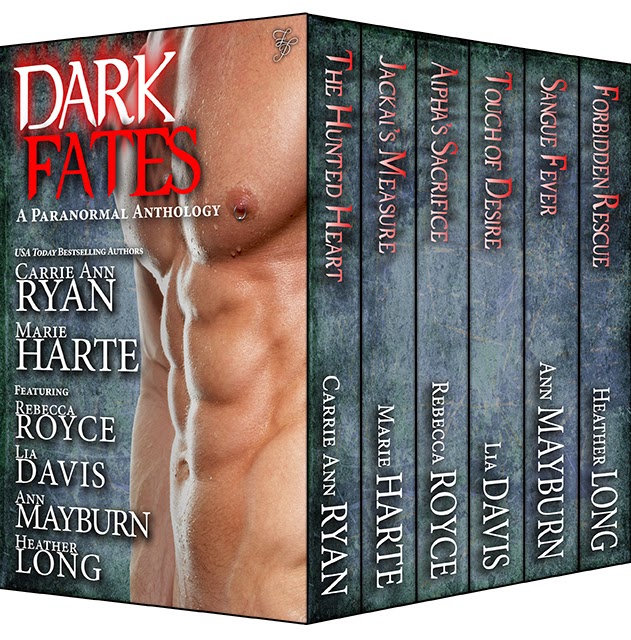 Cora Rivers is no stranger to pain. Just as she comes out of her mourning over her parents’ brutal murder, her brother—and best friend—suffers the same horrifying death. Grief cripples her and in attempt to learn to be independent, she inadvertently stifles her wolf by not letting her out to play on a regular basis. When Torin Fisher, begins the mating dance, her only choice is to run.
Together they have a chance to not only release her wolf, but find the connection and future they both deserve.

Six brand new, hot paranormal romance stories from USA Today and bestselling authors. Alpha heroes and heroines with dark pasts and the need to find their own happy ever after will draw you in and make you turn to the next page.

THE HUNTED HEART by USA Today Bestselling Author Carrie Ann Ryan
Emeline might have been alive hundreds of years, but she’s never really lived. Noah has known Emeline was his mate since he first saw her, only he doesn’t know if she feels the same. When he finally takes that final step, he’ll have to pray she finds the connection and overcomes the past she thought she’d lost years ago.

JACKAL’S MEASURE by USA Today Bestselling Author Marie Harte
Tortured by the god of chaos for centuries, Tariq knows only duty to numb the pain. When he’s sent to collect Eden, a sexy human accused of interfering in the Games of the Gods, his missing heart beats again. But love may not be enough to save them.

ALPHA’S SACRIFICE by Rebecca Royce
Hayden Chaucer is determined to make the best life possible for his pack and is ill-prepared to discover his true mate waiting for him in his home. Worse, his mate, Chelsea, has fled the True Believers, and her ability to see the future may cost them their present.

TOUCH OF DESIRE by Lia Davis
A submissive wolf who lost it all finds herself in a mating dance with the very dominant senior enforcer who will stop at nothing to claim her.

SANGUE FEVER by Ann Mayburn
Drifting without a purpose, vampire Lisabetta finds herself yearning for something more. She finds it while hunting for her next donor. Things are not quite as they seem when she seduces an older mortal man and finds herself in danger of falling in love for the first time in centuries.

FORBIDDEN RESCUE by Heather Long
All Jubilee Spector wants is to save her brother. The last thing she expects is to stumble into a dark world and another’s war. But Fox Arada is so much more than a man, and her secret threatens to change the Watchers’ world forever.

Bio:
Lia Davis is the author of the bestselling shifter series, Ashwood Falls, a mother to two young adults and three kitties, a wife to her soul mate, and co-owner to Fated Desires Publishing, LLC. She and her family live in Northeast Florida battling hurricanes and very humid summers. But it’s her home and she loves it!
An accounting major, Lia has always been a dreamer with a very active imagination. The wheels in her head never stop. She ventured into the world of writing and publishing in 2008 and loves it more than she imagined. Writing is stress reliever that allows her to go off in her corner of the house and enter into another world that she created, leaving real life where it belongs.
Her favorite things are spending time with family, traveling, reading, writing, chocolate, coffee, nature and hanging out with her kitties.