Giveaway and Spotlight On the fabulous A.M. Griffin!! 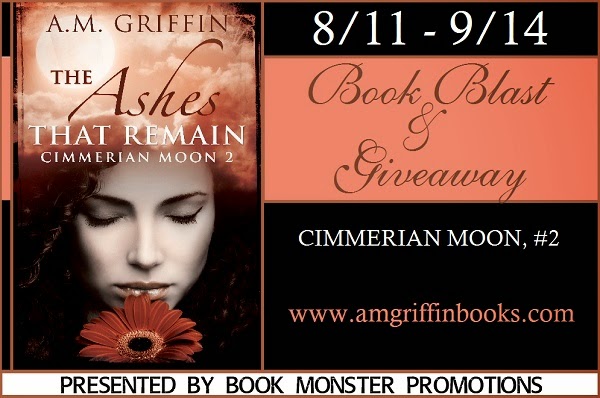 Seventeen year old Sinta Allen has one objective, to get from Tallahassee, Florida to her mother in Ann Arbor, Michigan. Seems simple enough right? Wrong. Hostile aliens have invaded Earth—and it doesn’t take a rocket scientist to know that we’re losing the fight. While the aliens bring devastation and destruction and take people away to God knows where in their spaceships, Sinta, along with some of her classmates must rely on their survival instincts, a little luck and each other if they want to survive the venture across the country. The last thing she needs is for Wade, her school friend and Jason, her rescuer, to distract her along the way.

THE ASHES THAT REMAIN

We’re at war against the aliens that have invaded Earth, fighting the only way we can—by surviving. I have more than most people do, but although I know it’s stupid to hold on, I can’t let go of what might have been—can’t help dreaming of something more. No matter how I tell myself it would be easier to do what everyone else wants me to, there’s a part of me that can’t give in.

Making the best of the situation is one thing. Settling, even to make other people happy, is something else.

Then we hear the alien mother ships have disappeared. Of course we have to go and investigate. What we find lands us in a huge mess that we somehow have to clean up and, as our little enclave is rocked to the core with even more changes, I’m learning a hard lesson.

The more things change—for the better or the worse—there’s no fighting human nature, and building on the ashes that remain will take everything we have. And maybe more.

**This book is written in first person. Young Adult, but some scenes may be too intense for younger readers.**

We’re out in the open.

And no matter how many times I’ve been to Detroit, it’s still an unfamiliar city.

If this were Oxford Township, we’d have known all the nooks and crannies to hide in. But out here every building looks like a trap and every street looks like a dead end.

A blast erupts in front of us, sending snow and pieces of debris up from the ground to pelt me in the face.

I slide to a stop and lose my balance to fall on my side. “Shit.”

As MJ runs by me, he grabs my hood, pulling me to my feet. I hear his heavy breathing as we plough through the snow, hampered by the heavy drifts but propelled to sprint by adrenaline and fear. The increasingly louder hum of the spaceship whizzes through the air, gaining on us.

The spaceship cuts through the wind above my head. MJ and I turn down a street and press ourselves against the side of the building. The spaceship travels in a blur past us. When it passes, I poke my head around the corner to see the ship make an angling turn back in our direction. Everyone has taken cover and is out of sight, except for Jorin.

My heart slams in my chest as I watch him dive under a car. When the craft makes a path toward where Jorin has hidden, I do the unthinkable.

I sprint from between the buildings and run across the street, drawing attention to me.

One shot at the car and Jorin is a goner.

Whiz, boom! The ground shakes underneath my feet as a blast hits no more than five feet from me. I take off running in the opposite direction. Whiz, boom! I skid to a halt as another blast hit a few feet to my right.

“Over here!” Rocky yells, flailing his arms in the air. “Come get me you bastards!”

The spaceship can’t focus on three targets, so it fires behind Rocky.

“Come on.” MJ’s strong hands grab me again, pulling me, urging me to run.

Panic engulfs me as Rocky runs by us. “That way!” He points to a narrow passage between two buildings. “Come on!”

I stay on his heels, too afraid to turn back to look at the spaceship or to see if everyone is following us.
Whiz, boom! Five feet in front of us, the ground shakes. Chunks of the building we were running toward erupts. Rocky makes a left. The GPS tumbles from his pocket. I slow down just enough to grab it and stuff it into mine.

The heat from the blast scotches the side of my face. From my peripheral vision I see them, five lizards running our way.

In a flash Rocky has his rifle in his hands, peeling off shots as we run.

They shoot back, one of the bolts hitting Ian in his leg. He howls in pain, falling to the ground. MJ and I stop, going back for him. MJ works on lifting him, trying to put Ian over his shoulder. While he does, I cover them, firing shot after shot at the aliens coming closer to us.

“Help us!” I yell to Rocky and Jorin, but they’ve got their own troubles. Aliens are chasing them. In a frenzy I look for Wade, he’s stuck in an alien shooting match of his own.

I turn back to the aliens that are now just a few feet away from us. I can’t let them get to us. Panic rips through me.

They’ll tear us apart without even trying. I empty both high-powered pistols in their direction, trying to keep them at a distance, taking down one. I reach underneath my coat, feeling the cool metal of my throwing knives in my hands. One-by-one, in quick succession, I aim and let my knives fly, hitting my target in the face. With each throw of my weapons, I try to kill. My knives hit the lizard’s eyes and one lodges in its skull.

Another lizard is too close for me to throw the knife that I’m clutching in my hand. I open my hand and let it drop to the ground. It’s no use to me right now. Using both hands, I reach behind my back and retrieve my swords.

“Leave me,” Ian cries out. I glance at him and see he’s clutching his leg. His face is twisted in pain as MJ positions Ian on his shoulder.

If MJ heard Ian, he doesn’t pay attention, because he lumbers to his feet with Ian dangling over his shoulder.

“Sin, let’s go,” MJ says as he struggles to walk in the snow with the added weight.

The lizard lunges for MJ and, with a swish of air, I take off its hand. I make a quick turn to the right and bring my other sword through its body where it glides freely until it lodges in the middle. As I pull out, the lizard falls on its stomach to land in a dead heap.

Another alien heads our way.

Where did this one come from?

I steady my feet and ready my swords. “Get him out of here MJ.”

“Don’t you dare leave her,” Ian yells. Just as I turn to tell them to keep going, the lizard’s tail hit me on my legs and knocks me on my back. I fall with an “oomph”.

The lizard looms over me, his thin lips are pulled back to reveal his pointy teeth, which drip saliva onto my stomach.

“You belong to me,” it snarls.

It leans down to me, arms outstretched.

I aim my swords and thrust them both in its gut and twist.

Its eyes widen in disbelief. Slowly the lizard begins to slip down my swords. Its blood gushes down the metal to meet my gloves. MJ lets Ian slide to rest against a bus, then uses his booted foot to kick the lizard on its side. It falls, taking my swords with it.

I struggle to my feet and, once there, I pull my swords from the lizard’s belly.

“Aw, shit,” Ian says. His eyes are on something past MJ’s and my shoulders.

I turn to follow his gaze. More aliens. I glance around wildly. Where are Rocky, Wade and Jorin? I hear the gun shots in the distance but I can’t see them.

We’re on our own.

With no bullets and no help.

“Sin,” MJ calls. He holds his hand out and I toss him one of my swords.

We can do this.

“Don’t be idiots,” Ian says, shaking his head. “If you two stay, they’ll just kill you.”

He smirks. “Good, leave the rest for me.”

It was odd. Us standing here, holding samurai swords and joking. About to die.

A. M. Griffin is a wife who rarely cooks, mother of three, dog owner (and sometimes dog owned), a daughter, sister, aunt and friend. She’s a hard worker whose two favorite outlets are reading and writing. She enjoys reading everything from mystery novels to historical romances and of course fantasy romance. She is a believer in the unbelievable, open to all possibilities from mermaids in our oceans and seas, angels in the skies and intelligent life forms in distant galaxies.

Stay up to Date:
Get notifications of new to A.M. Griffin books on Amazon   http://www.amazon.com/A.M.-Griffin/e/B00APK4V4G/ref=ntt_athr_dp_pel_1