Giveaway and Happy Friday the 13th with Andrea R. Cooper 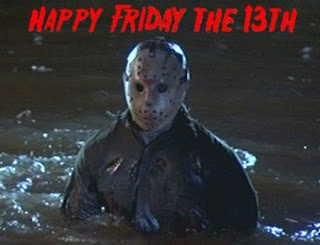 Welcome to Friday the 13th

To some, Friday the 13th, is a double-whammy of bad luck. Each has its own superstitions and together they bring fear and trepidation.

Friday has been considered unlucky for many reasons. To early Christian Jesus died on a Friday, and even further (without proof) that Eve game Adam the forbidden fruit (sorry, no I don’t believe it was an apple. I think it was something we don’t have or it wouldn’t be forbidden), and that they too died on a Friday. In some cultures, it is unlucky to start a voyage on this day.

The number 13 has far more issues than Friday. Even today, many buildings and hotels do not have a 13th floor nor do some airplanes have a 13th row. (Seriously people, just because it’s not labeled as 13, it’s still the 13th floor or row in my opinion). Why the bad rap? It was believed there were thirteen steps to the gallows. Some believe it’s because we have twelve months a year, twelve disciples, twelve is thought to be the number of completion in numerology.

Speaking of disciples, one the belief in unlucky 13 also stems from them. Judas was the 13th guest at the last supper. Hmmm…didn’t Jesus and the other disciples have many meals together and numbered 13 each time?

It was a Friday the 13th  when King Philip IV of France had the Knights Templar arrested and executed. And of course, I can’t forget the angry hockey mask guy whom has gotten lots of screams for his movies.

Personally, I love Fridays. I was born on a Friday. I don’t see it as an end, but as the beginning of the weekend. After all, I’d rather say “TGIF” than “hide under the bed it’s Friday”. As far as the number 13, I think of the baker’s dozen – one extra for free. That’s good. Most years will have 13 full moons. 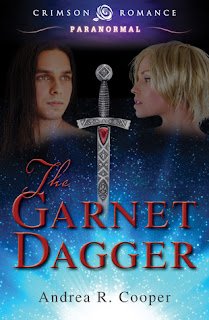 Forbidden to cross the Elvin barrier into human lands, Brock cannot sate his curiosity. Cursed by a vampyre bite that forces him to feed on the life-essence of others, he is unable to touch another without taking their life. Chained by prophesy, he must find a witch, pierce her heart, and draw her blood for his cure.
Celeste must escape the monks who have held her prisoner for years. Her magic has been kept dormant by her captors. An ancient powerful Warloc craves her powers. If he succeeds in devouring her magic, she and the world will die.
When Brock falls in love with Celeste before realizing her demise is his cure, will love triumph over his desire to be healed? Will he risk everything to save her from a Warloc, an oath breaker, who also wants her dead?

How about you? Do you dread Friday the 13th? Are you a little more cautious on this day?  Why or why not?  Comment Below for your chance to win a copy of The Garnet Dagger!!

Friday the 13th has never bothered me and I grew up watching the movies... My dad was a horror film fanatic:) I also think there is nothing unlucky about today as it is International Chocolate Day!!! I loved reading all your FT 13th info.

Good for you. In China and parts of Asia, it's the number 4 that is considered unlucky.

I didn't know about International Chocolate day! Time to pick some up and celebrate.

Thanks for coming by. And Happy Friday the 13th.

Thank you for having me today.

Andrea, I will be starting G.D this weekend.

My first apartment, the first time I was out on my own, the first home my daughter & I called all our own, was number 13. It was a great place and we were sad to move out. But it was time for bigger and better things. Two weeks into our new house, she joined a tee ball and got jersey #13! We considered it the BEST LUCK ever and still do ♥

Most of the time someone has to remind me its Friday the 13th. I'm not superstitious, but I try not to press my luck too. Fridays are always great because they're my half-day for work.

I was never one for horror-flicks so I've avoided those movies.

Friday the 13th has always been a good day for me. Then again, I won't even look at adds for scary stuff. Tweeted.

Thank you all for your great comments. I used to have half-day Fridays too!

TGIF! I'm not afraid of Friday the 13th... There is too much that happens that we don't know but reality is always scarier... like Monday!

My niece was married on a Friday the 13th and everything that could go wrong did. But I still do not feel anything about that day.
debby236 at gmail dot com

I don't know if I believe in good or bad luck. I think we create our own. Whichever the case may be, the 13th hasn't been a bad date for me (yet!). Best wishes on The Garnet Dagger. Looking forward to reading this one!

I agree, Mondays are scarier to me than Fridays :)

Maybe it's good luck to have things go wrong at a wedding?

They don't bother me every Friday is crazily busy at my work so I don't see any difference lol.

TGIF - I think if you go into a superstition with negativity you will get it. I am with you looking at that Baker's Dozen :) Thank you for the fun post.

Friday the 13th has never bothered me much. I'm not superstitious about the date.

I'm not really superstitious about Friday the 13th. I've known people who actually refused to work on those days. I've never understood it. Thanks for the giveaway. michelle_willms@yahoo.com

It's just another day. You could go crazy worrying about such things.