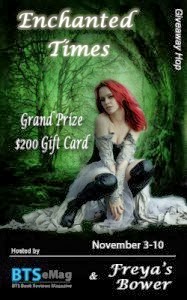 Hello Everyone and Welcome to my stop on the hop!!  Today I have Jessica Lauryn here with and we are talking about her new book:

Thanks so much for having me back, Nikki!  I’d like to share a bit about my take on one of my absolute favorite ways to spend my time…reading!

As an author, reading is not a lost art for me.  In fact, doing it inspires my writing in a major way.  Reading takes you to faraway places and times.  You meet characters whom you can identify with, and also some who may in some way be larger than life.  It is those characters who often inspire me to look for unusual traits in the people around me.  And that is when new characters are born.

Because I am a die-hard romantic, I am almost always reading romance.  But I prefer to read more than 1 book at a time, often, 3.  Why do I enjoy doing this?  Simply said, because jumping into 3 different fantasy worlds at a time is more fun than just 1.  Like many other readers I’m sure, reading is my form of escape.  I find it easier to make that escape when I’m reading multiple stories at once.  After an hour of reading chapters in each of 3 books, I’m freer, I’m more relaxed, and my imagination has been opened up to any and all new possibilities.

When selecting what I’m going to read, I usually pick titles belonging to three different subgenres.  Not everyone likes to read multiple subgenres, but I’ve found that most romance readers usually have room in their hearts and imaginations for two, or more.  On occasion, I’ve accidentally picked up something belonging to a subgenre I didn’t intend to read and I found I loved it anyway.  Back to why I read different subgenres at the same time.  I like having the feeling that 3 different worlds create.  It’s freer, it’s fun, and I personally find it much more imaginative!

It may seem a bit much at first, reading 3 stories at once.  But it really is as easy to do as watching 3 different TV shows.  As I’m writing this, I am currently reading one historical romance, one paranormal and one contemporary.  You may think it’s crazy to read so many titles at once/maybe you’re already doing it.  All I can say is if you haven’t already tried it, go for it!  Worst thing that can happen is you put the other 2 titles away for a while, while you read them one at a time.  The best?  You just might have your greatest reading experience ever!

My love of reading (and enjoying multiple plots at a time) inspires my love of both series writing and Romantic Suspense.  In a series, you get to experience what the central characters do for years following their debut story, and you get to see how the other characters in the series touch one another’s lives, something you don’t get as much of with a single book read.  I’m not saying I don’t enjoy non-series books.  I enjoy them too, but there’s something special about a series.  Must be the fact that they can go on for thousands of pages—something I just love, because you can really see the story develop over time.

I think one of the reasons I love the Romantic Suspense genre is because there’s literally two stories going on at once—the suspenseful one, and the romance.  This is just great for a reader like me, because there is almost never a dull moment.  My debut series, The Pinnacles of Power Series, centers around a diamond smuggling operation called Project Gemstone.  It’s packed with villains, danger and suspense and yet, unlike many of the Romantic Suspense novels I’ve read, it focuses heavily on the romance and romantic development between the characters.  I affectionately refer to what I write as ‘Suspenseful Romance,’ because that’s what I feel it is.  As a reader, romance is what I crave the most, therefore, it’s the central element I look for in a good read and what I always try to put into my own stories.

Aside from it offering the advantage of stirring the imagination, Romantic Suspense offers the opportunity for the suspense to fuel the romance, and vice versa.  For example, in my latest release, Dangerous Proposition, heroine Julia Dyson is on a quest to save her missing father, along with hero and suspected-villain, Colin Westwood.  During the book’s climax, Julia and Colin, who have been fighting their attraction and feelings for some time, become kidnapped and believe they won’t make it to see the next morning.  I’ll try not to spoil the book too much, but this scene provided me with an excellent opportunity to see what these two characters would do with their attraction when fueled by extreme fear.  In fact, it was a big part of my original inspiration for writing this story, to arrive at a scene like this, where suspense fuels romance in the ultimate way.

It doesn’t matter what sort of novels you like to read, so long as you’re reading them!  Reading provides the ultimate escape.  It will inspire you and, if you enjoy romance as much as I do, it may even inspire the romantic scenarios in your own life.  Happy reading, and remember—3 is always better than one! 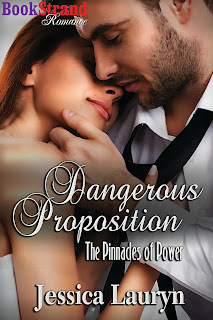 In the course of one disastrous evening, diamond smuggling kingpin Colin Westwood learns that his best recruit is missing in action, and that the man has been keeping a secret for years—he has a twenty six year old daughter. Determined to protect his identity, Colin vows to find the young woman, and keep her silent at any cost. Intrigued to learn that she is actually the attractive woman he kissed, he makes Julia an offer. Come to New York City with him to search for her missing father…as his mistress.
When Julia Dyson learns her father has been abducted, she believes his hidden profession may be to blame.  But when she discovers a man’s name in her Dad's caller history, a man suspected of shady business activity and also her teenage crush, she decides to take matters into her own hands.  She confronts her father's presumed abductor, resulting in an unforgettable kiss, and his offer of a dangerous proposition indeed.
Though becoming Colin’s mistress could very well be her undoing, Julia must choose—give in to her desires, or protect her already-broken heart…

Jessica is giving one lucky person is going to win a $25 Barnes and Noble Card!!!  Just fill out the rafflecopter and be sure to hop through!!!

Not sure if this counts but 50 shades of grey... actually first one of sub genre I read. ;)

I'm kinda like Jessica I tend to read 2 books at once sometimes 3. I currently reading a paranormal and and a contemporary. On top of that before these 2 I was reading a romantic suspense.

I would say it's a tie between contemporary and new adult :)

I read PNR more than any other romance sub genre.

Paranormal is my favorite!

Fantasy and paranormal romance is my fav

Mine would be romance and bondage .

Paranormal! Thanks for the awesome giveaway!

paranormal :) Thanks for sharing!

Great responses, guys! I like mixing in a paranormal with whatever else I'm reading because it these stories always keep me on the edge of my seat. Glad to see that a lot of you do, too!

Paranormal Erotica is mine. ;)

Paranormal romance is my favorite. Thanks for the great giveaway!

Paranormal romance.
Thanks for the chance to win!

It has to be historical at the top, with others following closely behind. Thanks for being part of the hop and for the chance at the prize!

Nice to see so many paranormal fans! The final book of The Pinnacles of Power series will more than likely be a paranormal, and spotlights recurring character and bad-boy Wiccan Jack Madera as the hero. I hope to call it Dangerous Magic and release in 2014 :)

My favorite is paranormal, I may skip around and try others, but I always return to my comfort paranormal reads.

I enjoy paranormal. Thanks for the giveaway.

That would be paranormal romance!

I love to read paranormal romance but I love to write contemporary romance. :)

My favorite genre is definitely Romance but it is difficult for me to pick just one subgenre because I love Historical, Contemprary, Romantic Suspense, and YA. And I absolutely love series because we get to see more of characters we fell in love with in other books. If I had to choose I would pick historical romance as those are the first romance novels I every read.

I love paranormal and historical romance :)

There is more than one?? LOL...the only one I don't read is historical. Anything else is open game :)

My favorite sub-genre romance, would be paranormal and erotica!!

Love, these answers, guys! Priscilla, you sound just like me! That kind of thinking is exactly what inspired my post. Keep on reading a little bit of everything!

I love paranormal romance as well

I love paranormal ones! Especially shifters! There my favorite! I cant get enough of them! :)

Steampunk or Paranormal.
Krysta B.

My favorite sub-genre is probably PNR or Historicals, especially Scottish ones. ;)