Playlists are great ways to take a look at characters and the authors themselves.  These are what the boys are bumping to in their heads..lol: 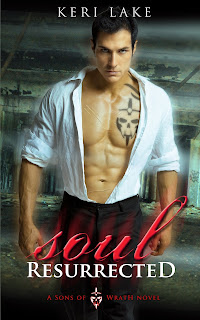 Soul Resurrected (Sons of Wrath, #2) Info:
Soul Resurrected Book Blurb:
As Wrath’s fiercest son, Logan carries the scars of fifty years spent in the most dreaded prison of the underworld, for a sin he’d kill to keep secret. Enduring decades of gruesome torture has left Logan feared by and detached from others, until a female Alexi’s blood resurrects his soul from death and, with it, the pleasures he’s been denied for so long.
Plagued by shame of her own, Calla is drawn to the ruthless demon, Logan, whose insatiable craving for her touch rouses buried passions and, for once, leaves her feeling desired.
A dark and dangerous evil has been reawakened, however, and when Calla is drawn too close to its breeding grounds, Logan vows to summon the violence of Wrath in order to keep her safe. First, though, Calla must save him from a past riddled with deceit and corruption … but only if she can accept the chilling consequences of unearthing his vilest skeleton.
Excerpt:
Wearing only her nightclothes, she left the room and walked the quiet halls toward the Wreck Room she’d learned of, where the demons worked out.

Light bled through the cracks in the door as she pushed it open, but Calla halted as she stepped inside.

Logan stood before a sparring dummy—punching, kicking, until it knocked over.

He picked his silent opponent up off the floor and went at it again, grunting with each powerful punch that had the thing shimmying like a dashboard hula girl.

Sweat glistened across his skin as his muscles flexed with each movement—every hit executed flawlessly. A black ball cap, turned backward, hid his short-cropped hair, above the black wife beater and warm up pants he wore.

Consumed by the contraction of his muscles and the precision of every hit, Calla’s fascination stole away her earlier anger.

The guy had a way of making a girl forget how much of an asshole he could be—or anything else for that matter.

What the hell had she gone there for?

As if he’d heard her thoughts, he stopped abruptly, mid-swing, and turned around.

Those brown eyes narrowed on her and his lip curled. “What are you doing here?” He faced-off with the dummy again. “Leave.”

Discomfort flooded her insides, turning her muscles stiff “I … I was just …” She swallowed past the lump in her throat. “I’m sorry.”

He accosted her faster than she could blink.

She backed herself all the way up to the wall. Her heart thrummed, pulse racing, as he boxed her in with his arms.

Chest heaving, his eyes radiated fury as they flickered red, emitting waves of authority that begged for her to look away. “Sorry for what, exactly? For getting me stabbed? Having my brother enslaved by a fucking succubus? Or do you mean you’re sorry for getting my other brother kidnapped by a goddamn psychopathic demon hunter?”

Tingles danced along the rims of her eyes and for all the effort of holding them back, tears spilled onto her cheek. Damn him.

Logan smirked and shook his head.

God, she wanted to claw his eyes out for it, as her sadness quickly turned into something primal, lodging deep within her gut, that couldn’t’ve given a damn that the male boasted three times her strength. “You’re a bastard, you know that?”

His jaw clenched. “What did you just say?”

“I’ve met a lot of repulsive creatures in the last few years, but you’re by far the worst of them all.” She swiped at her nose. “You hate me. I get it. So why don’t you cut the crap? You want me to leave? Fine. Happy to.”

She pushed herself off the wall but was thrown back against it, the collision knocking a small bit of wind out of her lungs and forcing a cough.

Like missiles warning fire, Logan’s massive arms replanted either side of her head, his face so close his breath hit her. Red flickered in his eyes. “You’re right. I’m the worst.” He inhaled a deep breath through his nose and spoke on the exhale. “Do you know what humans are to a Wrath? Blood in the water. Like sharks, we wait in hiding for that one moment when no one’s around. You’re all alone. Vulnerable.” His pelvic bone thrust against her. “A ripe fruit. Ready to be eaten.”

A cinnamon scent drifted past her, and weakness in her knees beckoned her to collapse. Her sex ached for him to grind against her again. She licked her lips. Touch me, she wanted to say to him, as if one single caress of his finger across her skin would take away the overwhelming need to be screwed right where she stood.

For some reason, she suddenly didn’t care who’d stroll in and see them.

The more the merrier.

His eyes met hers again, and as if lust took physical form, his lids seemed heavier, his lips so kissable they taunted the distance between them. “You’ll fall prey to my pheromones.”

That voice, so deep and powerful, tickled her stomach and she wanted to laugh at the thrill washing through her insides.

Fangs protruded from his lip and Calla wondered what it’d be like to feel them at her throat. “See, I don’t even have to try to make you want me. You’d let me fuck you right here against the wall if I wanted.”

Fuck. The word echoed in her head, and her body broke out in sweat. She bit her lip as visions of the raunchiest sexual experience she’d ever witnessed passed through her mind.

Every one of them starring Logan.

She’d have taken him any way he wanted: in her mouth, from behind, straddling a frickin’ exercise bike if that’s what he liked.

What was happening to her?

Such an odd feeling—her fears turning into enthrallment. The more he talked, the more she wanted him.

Her thighs rubbed together, her mouth parted. She’d never had a man inside her, yet she couldn’t wait another second to know the feeling.

Her focus shifted to the long veins popping out of his solid arms. So strong.

Nipples straining against the thin cotton T-shirt she wore, Calla glanced to the side to see his hands balled into fists against the wall.

Her tongue twitched with a sudden thirst for the sweat beaded across his chest and neck. Heat spread through her body, and, breaths heavy, she arched herself toward him like an offering.

As wetness in her panties brought her to the distant realization that the male commanded her desires, she squeezed her knees together tight in an effort to ease the desperation that had her hands fisted and anxious to touch where she wished he would.

“I’d pluck that fruit and devour it in front of you, princess.”

“Yes,” she breathed, his words only exacerbating the ache.

Imagining him on his knees in front of her had her sliding to keep steady against the wall. On some kind of auto-command, she reached up to him, her fingertips drifting across the crook of his neck and shoulder.

He jolted back from her.

The haze that’d clouded her vanished, and she snapped her hand back. What am I doing?

His eyes seemed to hold the same question. Gone was the anger she’d seen just moments before, replaced by a frown of confusion.

She lifted her hand again. “I didn’t—”

“Don’t fucking touch me!” He backed away from her, his expression almost shocked or ... horrified? “Stay the fuck away from me.” His hand held the place where her fingers had touched him, as if it’d wounded him.

Calla didn’t wait for him to say another word.

She kicked away from the wall and burst through the double doors.

Keri Lake is a married mother of two living in Michigan.  She writes paranormal romance, urban fantasy and loves a good, tragic love story.  Though novels tend to be her focus, she also writes short stories and flash fiction whenever distraction manages to suck her in to the Land of Shiny Things.

Giveaway!!  Enter to win a copy of this book!!!

ah i waited for this post^^ no more question to hunt the answer but so many interesting facts to learn thank you so much for this great event release Keri! ( since ebook and me are opposite i'm not entering the contest but i do want to read book 2 have no doubt on that^^)