Giveaway and Spotlioght On: Sweetest Taste of Sin by Danica Avet 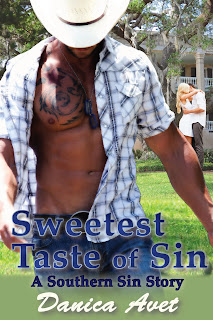 Logan Guillory finally has what she’s always wanted, a loving, sizzling relationship with J.B. Calhoun. So why can’t she shake her overwhelming need for his twin brother Anthony? Her small town morals tell her it’s not normal to love two men with equal fervor, but not even the risk of damaging her standing in Grand Terre, Louisiana can make her stop wanting to be possessed by them both.
Anthony ‘Ant’ Calhoun had his eye on Logan long before his brother entered the picture, but now he’s lost his chance, or so he thinks. J.B. has other ideas, which includes sharing Logan’s sensual caresses and big heart with his brother. Torn between overwhelming need and fear of the scandal that might ensue, Ant resists with all his might, but doesn’t stand a chance against the needs of the two people he loves most.
Giving in threatens everything they all hold dear, but who can resist the sweetest taste of sin?

Note: Contains scenes of one woman being properly seduced and thoroughly enjoying it by not one, but two men who happen to be twins. Very sexy, hot twins.