Hey everyone, my name is K. Margaret and I write paranormal romance.  I currently live right outside of Atlanta, Georgia, by way of Northern California and Connecticut. When I’m not writing, I’m working as a title paralegal, hanging out with my teenage daughter, or watching sports. I have a slight (okay, maybe large) obsession with sports. I’m the crazy chick that wakes up to the NFL Network when most people wake up to the morning news.


I started writing poetry as a child, but didn’t really get into writing fiction until I was in my twenties. My best friend and I would sit around and tell stories and one day I decided I needed to put those stories on paper. The voices in my head also demanded it, especially one particular demon. We’ll call her Empusa.


I released my first book, Dare to Dream, last November, which is also the first book in my Dark Dreams Series.  Endless Nightmare: The Origin of a Demon was released last month. And Dreams in the Dark, Book Two of the Dark Dreams Series is being released at AAD and I’m so excited to introduce you to new characters and check in on some old ones. My books are filled with demons, witches, shifters, slayers, gods, and more. I love to write strong-headed, sarcastic, kickass females and the men who put up with them.


While I have attended AAD several times as a reader, this year will be my first year attending as an author and I’m so excited! I have so much planned and lots of fun stuff to give away. If you’re sitting at my table for the Debut Dinner, you’ll find out all about my favorite saying, WWED (What Would Empusa Do?). We’ll be going a little demon on that one! For my Fantasy Ball table, the theme is witches, but not just any witch. Dreams in the Dark takes place in Savannah and one of the characters is a witch named Tiffany. She’s a total trip and a half, so I couldn’t think of a more perfect setting to base my theme around her and her shop, The Triple Goddess.  Don’t worry though, if you’re not sitting at my tables you’ll be able to find me at other events. I’ll be one of the authors hosting breakfast on Thursday morning, attending the New Release Party, and I’ll be at the Literary Tea (with more fun swag!) Thursday night, you’ll find me down at Smiles, my favorite piano bar. So make sure to stop by, have a drink with me and sing along (just don’t make fun of my horrible singing voice J )


I’ll be getting to Savannah on Monday, so make sure you find me and say hello. The first three people who ask me “What would Empusa do?’ I have a special gift for.


Looking forward to seeing everyone in August! 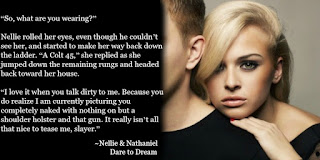 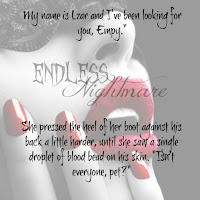