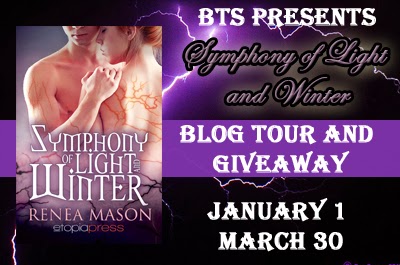 Hello and Welcome to the kickoff for Renea's tour!  I have had the pleasure of reading this gripping and completely unique book and can't wait to tell you all about it. But first, I asked the author to pull 10 of her favorite quotes from inside the book.  This will give you a little varied taste from whats inside.
Ten Quotes from Symphony of Light and Winter
“The way you are looking at me right now... Please, always look at me this way. Stare into my eyes and see me for who I am and know that there is nothing more than this. When the world calls things into question, you need not question me because I will always be here for you. The comfort I find in your eyes is new and frightening.” - Cyril
“Strangers? You know my name and I know yours; the formalities have been satisfied.” He smiled, charming and devastating. “Besides, isn’t the best part of friendship the discovery of one another? Friendship doesn’t start once you know all there is to know, it’s the journey we share.”  - Cyril
“I’ll never let anyone hurt you. Never! But you will obey me from now on. You will respect that I have more experience, and you will follow my orders. I told you to stay put. You could have been killed and I don’t know if I can bring you back. Do you have any idea what that would do to me? Your reckless behavior must stop. It’s not an option for either of us.” - Cyril
There is no way to explain to her what I’ve done, how deeply I have bound us. The connection is so strong, I want to climb inside and live within her. If only she would allow me to touch her, to hold her, to make love to her willingly. With no coercion, no distress, no pretense. She’ll never know how deep my need goes, beyond the physical, beyond the soul. I don’t want to possess her, but rather combine myself with her so we are two halves of one whole. She is the end to my beginning and the beginning of my end. My balance. My completion. My salvation. My Light. -Cyril
“Don’t you understand, it’s the intense love I have for you that makes me such an idiot.” - Cyril
Was it possible he wasn’t the supernatural manifestation of Murphy’s Law after all? - Linden
“Don’t laugh. I won’t pretend I’m not jealous and angry. I am. But if you knew the things they were thinking you’d better understand why I need to do what I’m about to do. Do you see Dominic over there? Let’s just say his tastes run a little dark. Ever spend considerable time naked with your hands bound behind your back and a ball gag in your mouth? He’s picturing you that way, this very instant.” - Cyril
“Are you telling me you’re the Grim Reaper? Surely you’re not saying you’re Saint Peter?” - Linden
He cycled through the playlist and stopped on a Sarah McLachlan song. He rolled his eyes. “All the artists on here are women who are either angry, Canadians, or lesbians. Hell, you have a few that fit all three categories on a Venn diagram.” - Clarence 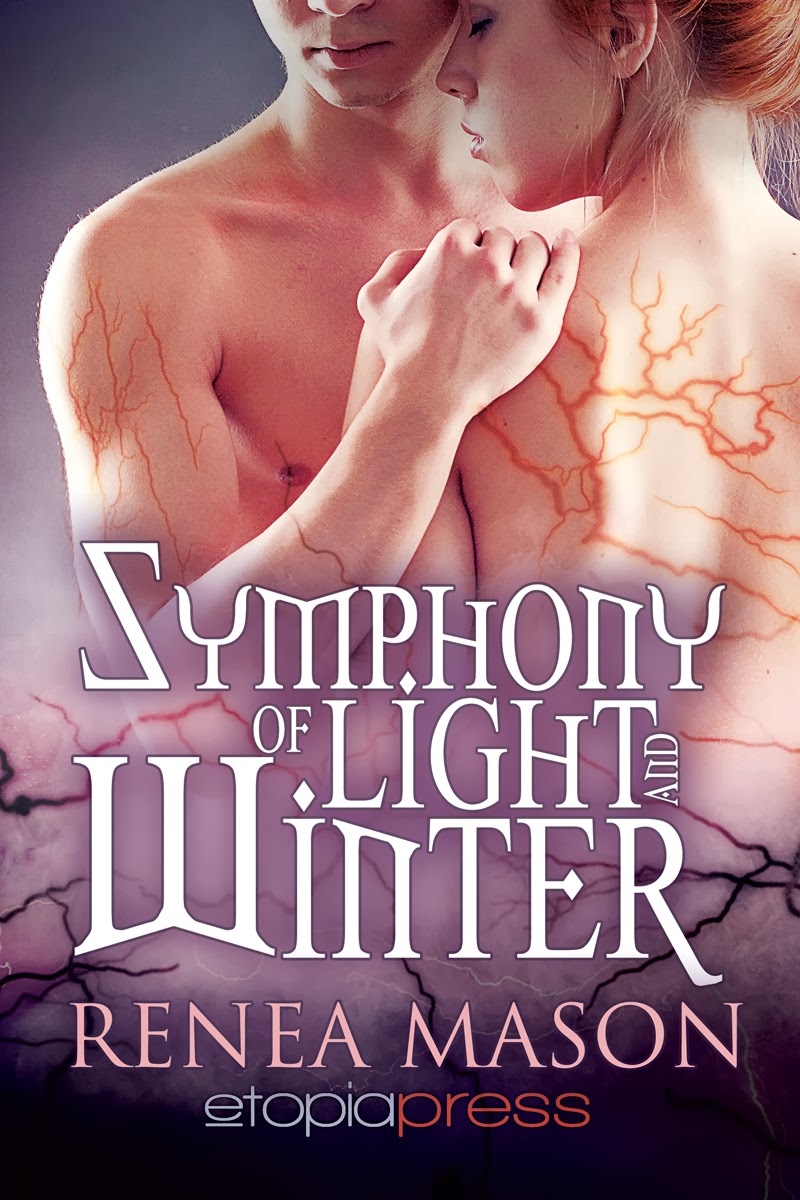 Etopia Press
Symphony of Light and Winter
Symphony of Light Book One
Renea Mason
Genre: Paranormal Erotic Romance
Length: Novel
Word Count: 88,375
Page Count: 389
Price: 5.99
ISBN: 978-1-940223-10-0
Heat Level: 4
Release Date: 06/21/2013
One woman. Seven men. All bound by one man’s undying devotion.
Fundraiser Linden Hill has a knack for reading people. She always knows which conversations will put a prospect at ease, which drink will loosen a patron’s lips—or his wallet, and how cleavage will make a donor sweeten the deal. She’s even foreseen her dateless weekends four hundred and sixty-four times in a row.
But ten years after watching life drain from her former mentor’s and first love’s eyes, her skills for divining the predictable are lost. When Cyril returns, he’s still gorgeous, but this time he’s beyond human, far less dead, and pissed. His lack of memory drives him to desperate acts, and his turbulent re-acquaintance with Linden pulls her into his war with a creature hell-bent on his destruction. His group of six supernatural men share a tantalizing secret, but despite the hunger, it’s love that leads her to sacrifice everything to save him…

Renea Mason writes steamy romances to help even out the estrogen to testosterone imbalance caused by living in a house full of men.

She is also a founding member of the Coffee Talk Writers.  http://coffeetalkwriters.com/

A short excerpt to whet your appetite.

He placed his forehead against mine, took a deep breath. “Fuck. Maybe Overton is right. Maybe someone should save you from me.”

thank you for sharing and congrats to Renea on the release!

What an exciting book! Thanks for sharing the great excerpt. How many books are planned for the Symphony of Light series?

Good luck with the series.

I have wanted to read her book for awhile now. The author is such a wonderful lady and will communicate with you where there's lots of authors that don't. Renea is a great lady and she loves her fans.
Angela F.

Sounds like an amazing read!!
Thanks for the excerpt and the chance to win!

Question: Where do the your ideas for the books, come from?

When working with so many characters within a book, how do you keep each person's voice distinctive? I also want to add I enjoyed the excerpt tremendously. I've seen the consistently high ratings; now I'm beginning to understand WHY they are so high. Holy hot tamale! That was absolutely delicious. Thank you so much for sharing.

Thanks, Michelle! The characters are all so different it hasn't been hard to control voice. Linden, my heroine, gave me the hardest time, trying to keep true to her narration and dialogue while I put her through an emotional wringer. I'm glad you enjoyed the excerpt

Hi Lisa! The characters tell me what to write. I simply do what I'm told. :)

Always great to talk to you, Angela! Thanks for your kind words! I have contacted my publisher about doing an audio book version of Symphony. They currently do not do audio books but they are looking into it and I have offered to be a pioneer! Fingers crossed. I absolutely love audio books! As always, my best to you!

I honestly have no idea. I know will be a minimum of three because I'm working on #2 and have a plan for #3. I also have a plan to release short stories between novels to supplement the series. So it's really hard to tell. :). Thanks for asking!

I wanted to know at what age you wanted to be a writer?

How did you pick the cover?

where do you get your inspiration? Do you have a special writing place?

Renea, I loved your first book and I can't wait for the next one, when is it schedule?

1 novel. 1 short story. 1 novel in the works. I've published the first two and am hoping to publish the sequel as well.

I let the story determine that. With Symphony of Light and Winter, I had no doubt it would be a series.

I didn't. :). My publisher supplied the cover.

I write in a small nook in my bedroom. I don't force my writing, so it does take me a bit longer, but inspiration comes from places unknown-muses? Psychosis? Who knows? :)

Thanks, Kathy!!!! It's not on the schedule yet, but should be this year.

Do you have any new series in the works after this one? I loved this book and can't wait to read more from you.

Did you always want to be a writer, or what DID you want to do?

I started writing at thirty seven--about two years ago. Symphony of Light and Winter is the first piece of fiction I've written. I've done a lot of business writing, but fiction is very different.

No, I never dreamed of being writer. I wanted to be on Broadway in musicals at one point, but that was lifetimes ago. I'm a successful business woman in my other life. :)

I like then all, but I've probably read more vampire novels than anything.