Giveaway and Spotlight On: Divided Loyalties by Lia Davis 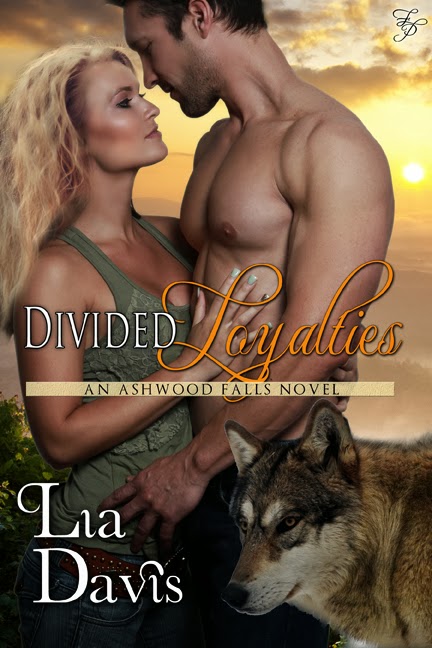 Blurb:
Trained to hunt rogues and protect the human race from the threat of shifters, Christa Baker is beginning to rethink her career choice. Especially when her niece and nephew—who she’s raised on her own—end up in the crossfire. Now she’s looking for a way out and disappear off Shield’s radar for good. She never thought her out would be a gorgeous wolf who kidnaps her after raiding Shield HQ.

Hayden Raines has always followed the rules. As the Ashwood Fall wolf Marshal, he has to set the example for those working under him. When he sets his sights on the beautiful human hunter things go downhill, fast. Fate has a funny way of turning things inside out—because the woman he kidnaps, the enemy he might need to protect his family from, just happens to be his mate.

Warning: Contains one woman on a path she’s not ready for, a man who thought things would be different, and a heated exchange that turns out to be the best thing ever.

Hayden walked his mother out to her car. She’d been silent since he returned to the house with Christa. That wasn’t good. His mother had no problem speaking her mind, but something had her holding her tongue.
Luna faced him when they reached the car. “I hope you know what you’re doing. I can’t allow her entry to the den just yet.”
“I know. I wouldn’t ask it of you. Mate or not, Christa’s loyalties could still be with Shield. Or should I say Vance.” He ground his molars together at the thought of the rogue running a human rebel group.
“What if she doesn’t believe you and decides to go back to Shield?”
“I’ll have to make sure she sees the truth and that doesn’t happen.”
She smiled wickedly and tugged him down so she could place a kiss on his cheek. “Be sure you do, dear.”
He opened the door for her, and once she settled in the driver’s seat, he shut the door and stepped back. Christa would see the truth. She’d said she was looking for an out. Still, he couldn’t help, but sense that she was hiding something.
He was going to find out what.
Determined, he turned to go back to the house. When he stepped inside, he saw Christa huddled in front of the fireplace. He grabbed one of the blankets his mom had brought, along with an apple from the box of food and walked over to Christa. He wrapped the blanket around her and sat down so his shoulder touched hers.
“Thanks,” she muttered, but didn’t look at him.
He handed her the apple. “You’re not a prisoner.”
“Then let me go.”
“I can’t do that.”
She snorted. “That makes fucking sense.”
Hayden felt his lips twitch. The female had spirit, that was for sure. He was going to enjoy playing with her. “Have you heard the stories on why Ashwood and MoonRiver merged together as one pack?”
She took a bite out of the apple and chewed before speaking. “I’ve heard several rumors. It depends on the source…” She drifted off as if realizing something.
Hayden remained quiet and let her stew over whatever conclusion swirled around inside her head. Finally, she said softly, “Shield isn’t like it used to be. We were established to protect humans from the rogues. We never went out of our way to attack dens without solid proof.”
He fisted his hand in his lap to keep from touching her any more than he was already. He heard the slight disappointment in her tone, but it was masked by anger. It was as if she’d lost faith in their cause. “Is that why you want out?”
She shrugged and continued to stare into the fire. “I’m thirty-nine and not getting any younger. The new commander of Shield changed everything. He had the Memphis unit ready to go into Ashwood in a full-on attack.”
Hayden tensed at her admission. It sounded too close to the vision his mother had. If what Christa said was true, then Vance may already have a backup plan in place. He’d be sure to tell Blaine and his mother to look into other rebel groups. Maybe Blaine’s mother-in-law’s mate, Damian Archer, had information to share. The puma did work for one of the shifter rebel groups and had contacts all over the U.S. Damian and Sarah had moved to Ashwood Falls a few weeks ago after Sarah was targeted by his right hand.
Of course Christa would have information on the human groups as well, but he’d have to gain her trust first before she’d work with him.
“My father went rogue.” It was the only admission he could think of that would catch her attention.
She peered over at him and frowned. “Did you kill him?”

About the Author:
Lia Davis is a mother to two young adults and two very special kitties, a wife to her soul mate, a paranormal romance author, and co-owner to Fated Desires Publishing, LLC. She and her family live in Northeast Florida battling hurricanes and very humid summers. But it’s her home and she loves it!
An accounting major, Lia has always been a dreamer with a very activity imagination. The wheels in her head never stop. She ventured into the world of writing and publishing in 2008 and loves it more than she imagined. Writing is stress reliever that allows her to go off in her corner of the house and enter into another world that she created, leaving real life where it belongs.
Her favorite things are spending time with family, traveling, reading, writing, chocolate, coffee, nature and hanging out with her kitties.

GIVEAWAY!
Lia is hosting a tour-wide giveaway of a $50 gift card to Amazon, Barnes & Noble, OR All Romance eBooks (Winner’s choice), an eBook from her back list (Divided Loyalties not included), and a swage pack. Just leave a comment and follow the Rafflecopter instructions below to enter.
The giveaway is open to international readers.

You mentioned in your "About Me" section of the blog, that you like many genres, what is your favorite genre?

sounds fun & sexy, thanks for the excerpt & contest

Are your character's based on people in your life? Thank you for the giveaway.

I love this series and Divided Loyalties is awesome! Thanks for sharing it and the giveaway.

congrats on the new release! I'm definitely going to have to check out this series!

Congratulations on the new release! If your book was made into a movie, who would you pick to play the main characters?

This sounds so good!!! Thanks for the awesome giveaway!! Can't wait to read it :)

Thanks for the teaser!

What inspires you? Do you make playlists when writing?

It sounds so ummm..... whats the word I'm looking for? Oh yeah Delicious. I can't wait to read them. Do you have a special writing place to get in the zone? Thanks for the Awesome Giveaway!

How many more books do you have planned for the series?

What kind of music inspires you?

How do you choose the characters' names in your books?

I'm not sure how I have not heard of this series before, where the heck have I been?! My question is: do you have any plans for another series after this?

Looking forward to reading this one. Thanks for the giveaway.