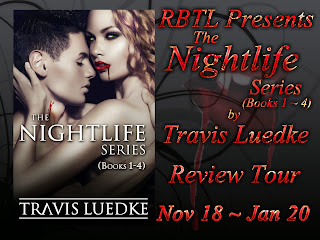 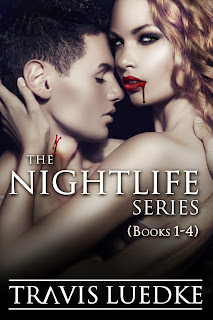 Can decadence, corruption and prostitution go hand in hand with self-control? Over-indulgence, illegal activity and vampires lurk in darkness when night falls on the city.

The Nightlife Series explores the sexy, dangerous misadventures of vampires and an interesting assortment of wickedly corrupt men and women of the night. Gangs, pimps, prostitutes, cartel, mafia, drug dealers, addicts, alcoholics, and all those wonderfully colorful people you find rubbing elbows in the back alleys, night clubs, and strip joints.

Book #1
Release Date: Aug 18 2012
Amazon/Barnes and Nobles/Smashwords/Goodreads
Blurb/Synopsis:
Aaron Pilan’s life is forever changed when he’s shot trying to rescue a drop-dead gorgeous woman on the streets of New York. Aaron is thrust into the shocking world of vampiric slavery when Michelle shares her blood to save his life.
Michelle's existence as a solitary vampire is also altered when she accepts this naive young man into her life. Bound by her blood, Aaron is subject to her authority. He walks a tightrope of strictly controlled feeding regiments and intense sexual adventures while catering to the neurotic control-freak tendencies of his new master. She vows to eliminate him if he proves too difficult to control.
This story is bold and evocative, infusing blood, sex, love and turmoil in an urban drama about two vampires battling evil outside and within themselves.

Book #2
Release Date: Nov 17 2012
Amazon/Barnes and Noble/Smashwords/Goodreads
Blurb/Synopsis:
Vampires, Aaron Pilan and his master Michelle, live by one rule - no bloodslaves. EVER. Aaron breaks that rule when he meets Anastasia. All Anastasia wants is to be loved and cherished, but the predatory men she’s attracted to bring her only pain and abuse. Escaping one train-wreck relationship for another, she finds happiness with Aaron and Michelle as a bloodslave, a 'pet'.
When Aaron uses his telepathy to win thousands at the gambling tables, he attracts the deadly attention of the Colombian Cartel and Aaron and Michelle are 'disappeared'. Addicted to the bite of her vampire lovers, Ana is desperate to find them. But, Las Vegas isn't ready for vampires mixing heroin, sex and vengeance. Ana is trapped in the spiraling chaos.
Book #3
Release Date: April 30 2013
Amazon/Barnes and Noble/Smashwords/Goodreads
Blurb/Synopsis:
Vampire master Michelle, and her slave, Aaron Pilan, flee to Paris, leaving behind the slaughter in Las Vegas. Aaron made the costly mistake of taking a bloodslave, and then married her. The tragedy of his wife's death has driven a rift between them and Michelle is desperate to heal the breach.
Struggling with his predatory alter ego, Aaron is fractious, rebelling against his master. He desires another bloodslave, and that Michelle cannot allow. She opens her heart and soul to Aaron and he relives, through her memories, her dark, gritty tale of survival in the savagery of WWII Paris under the German occupation. Michelle's staggering revelations are deeply disturbing. The confrontation of master versus slave comes full circle as the couple faces death and separation.
And they are not alone in Paris. An investigator has followed them from Vegas seeking the unique gifts of Michelle’s blood. He’s watching and waiting for the opportunity to make his move against them. 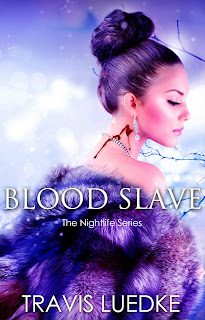 Stand Alone With Similarity to the Nightlife Series
Release Date: Dec 23 2012
Amazon/Barnes and Noble/Smashwords/Goodreads
Blurb/Synopsis:
Her mother named her Esperanza Salvación - Hope for Salvation. But when a girl works as an escort for Colombian cartel in the ghettos of Spanish Harlem, there wasn’t much hope, or salvation.
Hope’s telepathic ability keeps her a step ahead of ruin, but her unusual gift attracts the attention of a psychotic vampire bitch. Trapped in a Manhattan penthouse with the psycho, she thought she was dead meat.
Her survival lies in the hands of Vampire Master Enrique. He seems to respect her, perhaps even care. As a measure of protection, he makes her his personal Bloodslave. Helplessly addicted to his bite, Enrique rules her every moment. As always, Hope must adapt to survive.
Swept into the decadent nightlife of Manhattan's elite, she falls in love with Enrique and prays someday he may grow to love her, too. But is it simply a relationship of convenience? Is she nothing more than a concubine desperate to satisfy his nightly demands for blood and sex?
And forever in the background is the fear that one day the cartel boss she abandoned will hunt her down to collect on old debts. 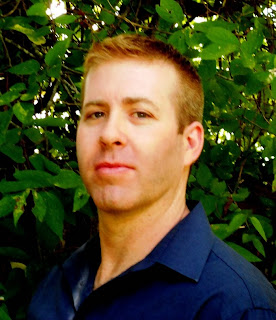 Travis Luedke is a husband, father, and author of Urban Fantasy Thriller, Paranormal Romance, Contemporary Fantasy, Young Adult Fiction, and Sci-fi. He is currently catching a 3rd degree sunburn in San Antonio, Texas, and loving every minute of it.

As the author of the Nightlife Series novels, Travis lives very vicariously through his writings. He invites you to enjoy his macabre flights of fancy, but be warned: The Nightlife Series is violent, sexy, and occasionally violently sexy.

Next entered a cute, brown-haired, brown-eyed girl, with a sweet, shy smile.  She looked really young, younger than Aaron.  Michelle gestured in his direction and the girl asked, “What do you have in mind?”

“A lap dance.”  He tried not to smile like an idiot at the girl.

She took off her robe setting it to the side.  “My name is Lisa.”

She wore nothing but one of those dental-floss bikinis, same as the previous girl.  Her body was soft and curvy without the athletic, hard edge of the Butch that danced for Michelle.  In truth she looked barely of age.

Lisa moved slowly and sensually to the music, sliding up into his lap.  He held her gaze as she mounted him.  His erection punched up the crotch of his pants, pitching a tent.  Lisa began rubbing her breasts up his chest while curving her warm, wet center, back and forth over his raised pants, giving a constant massage to the tip of his engorged cock.  He read her sincere desire to screw him silly right there, rules be damned.  She was completely enthralled, and all he’d done was stare at her.

As she dry-humped him with a wonderfully agonizing pelvic grind, she had slid into biting distance.  His senses heightened with arousal.  Lisa’s pulse beat throughout her body with a fluttering at her throat just under the skin.  He felt an itch coming from his fangs.  They were fully exposed and needed to be sunk into this girl.  He so wanted to take a chunk out of her.

Michelle gave a slight nod he perceived as the signal, and he lashed out to bite down on that beautiful, little pounding pulse point.  It seemed the most natural thing in the world–like he’d been doing this all his life.  The instinct and know-how to bite was deeply ingrained into his new psyche.  It was official.  He could no longer deny the truth.  Aaron was now a vampire.

His fangs punctured her skin with a yucky squish sound.  Lisa tensed up at the initial sting of the bite, and then relaxed as his venom dumped a wonderful magic flow of endorphins into her bloodstream.  Her blood coated his tongue in delicious syrup.  He sucked hard and fast, gulping whole mouthfuls.  Her strong little heart pumped blood just as fast as he could swallow.  The experience was exquisite.  Simply the richest, sweetest delight of flavor he had ever known.

With the blood flow came a new flood of Lisa’s emotions, passions, and a sense of her very life essence.  His psychic connection sunk in deep with the flow of her blood.  He immersed in her psyche, everything Lisa.  She washed away his sense of identity.  There was only Lisa and her fantastic euphoria brought on by the venom coursing through her blood stream.  Lisa panted and gasped.  Her whole body rocked with the force of her grinding thrusts on his lap, her entry engulfing the tip of his cock.

He felt psychic waves of ecstasy pouring off her in her venom-soaked climax.  As her wetness gushed onto his pants, soaking his erection, he penetrated another inch, having sex fully-clothed.

Lisa’s peak struck again and again, each eruption slamming gasps and cries from her lips.  The combination of the blood high, Lisa’s psychic ecstasy pouring over him, and his near climax, hit a total sensory overload.  This was a divine religious experience.  The kingdom of Heaven shone down with all its hosts and choir singing praises to God.

Michelle shut the pearly gates to Heaven in Aaron’s face with her command, “No more, stop now!”

Warning:  This book is NOT for Twilight fans.  Sparkly vegetarian vampires have no room in this world and are subject to become food for these two :)

I admit, when a friend of mine described this series as gory and bloody, I got a little excited.  I like vampires that more true to the nature I think would develop after being alive for so long.  I just can't imagine ancient beings as being nice and loving after having lived around humans for so long.  This series WAS gory, bloody, and downright sexy.  The author has created a great story between an unwilling master vampire and her new prodigy.  You follow these two through the cities on a few adventures and watch how the relationship develops between them.  You see all the angst and frustration of being a newbie.  The lack of patience in Michelle at his rookie mistakes.  But you also get a glimpse at the love and morphs into something else.

It truly was a fascinating series!  I would definitely read from this author again!!!