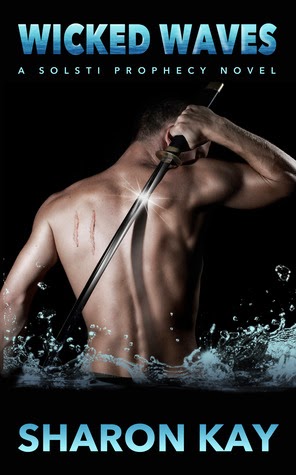 Making daggers out of raindrops is only the tip of the iceberg for Brooke Bonham. As one of four women who can control the elements, her ability to manipulate water packs a deluge of potential. Eager to learn more, she’s frustrated at the precautions she must take to avoid the wrong kind of attention on Earth.

Kai's duties as a Lash demon have kept him busy on Earth for nearly two hundred years. Fighting? He was born to do it. Females? They're drawn to him. And Earth? The perfect place for him to avoid supernatural bounty hunters.

Though the two of them mix like oil and water, Kai senses that beneath Brooke’s frosty exterior hides a vortex of simmering passion. He’s determined to thaw his ice princess.

Forced to work together in the immortal realm, they track a rogue Lash demon at the helm of a widespread kidnapping operation. All too soon, Kai’s dark past catches up to them. Time runs out as a second enemy, bent on revenge, vows to stop at nothing short of Brooke’s enslavement and Kai’s death. As they and their foes stalk each other in a demonic game of cat-and-mouse, will her evolving skills and their fledgling bond be enough to save them?

One of the BEST paranormal romance books I have read period.  I was absolutely sucked in from the very first page of this exciting and thrilling NEW paranormal adventure.  It was an incredibly marvelous world that was created by this author.  Demons have always been one of my favorite paranormal characters because there is just so much you can do with them.  But this book blew Larissa Ione's Demonica series off my shelf, which was one of my favorite demon series.  I HIGHLY recommend this book to all paranormal romance fans, which dipped into quite a few erotic scenes.  It was an excellent mix of adventure, sex, heat, and the story line was out of this world.   It flowed like this author is on her twentieth series, not her first!!

Kai was instant love for me.  He was hard-core,had the tragic story line, no bullshit, gritty, and OHHHH so hot!!  He had a great heart that he kept buried and held most people at arms length, which is where he tried to keep Brooke (which failed miserably by the way). Something about her pulled at him, and she was a temptation he could not ignore.

I loved watching these two fall in love. The passion was already there because the dynamics when they were together were amazing.  Even before the sexual tension was admitted to each other, it obvious to those around them that something was going on and it sure wasn't hate.

This author has moved up into my top ten.  I cannot believe how much I truly enjoyed reading this book.  It was satisfying on every level because it was so fresh and unique.  My only regret is that I cannot rate this above a 5 and that I haven't found her sooner!! Excellent read!!

wow! blew L. Ione's Demonica series out?! Hell, I gotta check this one out. thanks for sharing Nikki