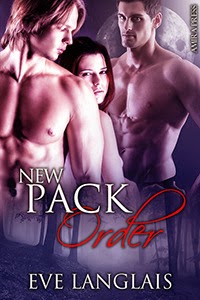 With the death of Roderick, an evil hybrid vampire, Marc and the other freed wolves should have breathed a sigh of relief. Instead, a new menace has arisen. It will take courage and cunning to battle it–or a cold hearted vampire who, despite his loner ways, not only forms a bond with a shewolf and a rogue, but establishes a New Pack Order.

Marc can’t escape the memories of what he did while under Roderick’s mental control, but he can attempt to atone. He begins his quest by saving a female Lycan who needs guidance—and a mate. The problem is convincing her to accept his help, and his love.

Thaddeus has lived too long to waste his time playing the games the other vampires indulge in. However, when it comes to keeping his kind safe from the notice of humans, he’ll do what it takes to stop a madman intent on starting a war. He embarks on a one man quest to avert disaster, but along the way discovers even a killer can become a hero—and a lover.


Antonia might regret losing her humanity, but with a werewolf and a vampire at her side, she discovers an inner strength and passion to not only live, and fight, but to love, not just one, but two very special men.

Can we say yum?  I'll say it yummmmmmmmm. The story-line, to which we thought came an abrupt bloody end in the last book....just freaking got seriously more interesting.  So we have our damaged escapees that remained a bit sane, outcasts basically from their packs, being hunted by a new unknown player.  We have Thad, who by the way is a pretty unlikely hero,stepping up to the plate to do whats right.  The problem is...no one really wants to help him or believe him...except for one hot Latin wolf and her ginger rescuer.

Even though it wasn't chalked full of this endearing author's usual humor, the story-line was amazing!  And the sex scenes?   That was the yum factor.  They were unbelievably HOOT!  This lucky little wolf got the best of both worlds, and we have a few more books to look forward to in this series.  I for one can't wait!!!!  Great read!!!!

This book sounds awesome! I am going to have to check this series out. ;)

Thank you for sharing your thoughts, Nikki!