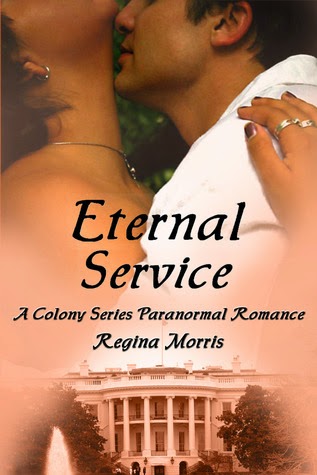 Vampires exist among us. They can be our neighbor, best friend, our child's teacher ...

They alter their aged appearance based upon the amount of blood they consume. They move to a new area, drink a lot of blood, and appear young. Slowly they limit their intake of blood and age, right in front of our unsuspecting eyes. After decades, they fake their death, move, and do it over and over again.

Most live quiet lives in an effort to blend in.

Some however want power and control.

The Colony is an elite group of vampires sworn to protect the President of the United States from these rogue vampires.

When Raymond Metcalf, vampire coven master of the Colony, teams up with a federal operative of the human female persuasion–who has no idea that vampires even exist–will his mission or his heart be compromised first?

Career military woman, Alex Brennan, is being offered the promotion of a lifetime and with it a romance that she has desperately been seeking. Does she dare accept the position as Director of the Colony, an elite group of deadly creatures of the night and risk a dangerous romance with a man who isn’t even human?

Together, can they save the President?

This book caught me completely by surprise. It was really quite a unique experience.  You have a group of vampires that are called The Colony, whose main existence is to protect the president. lol...Obviously the vampires aren't allowed to have a political opinion.  You have an interesting variety of different vampires, and this story is about the oldest of the group, Raymond.  Raymond is very old-fashioned and still very much in love with his dead wife.   His family and friends worry about him because he has gone to long without companionship...then the new director walks in and blows Raymond's mind.

I liked a lot of different things about this book.  The author gave an alternative feeding method to body parts and bags...I thought that was really cool.  I liked the inventive way the author allowed the vampires to change their age and how they died.  I loved the fact that Alex was older, not some 18 to 25 year old.  It made the story more refreshing and relateable to me.  I also liked the fact that all vampires didn't have powers.  It made their species more interesting.

The story itself was amazing and completely engaging from beginning to end.  I cannot wait to read more about this series.  It has a very promising start!!

It does sound pretty awesome with the unique stuff you mentioned. I'll have to try this one, Nikki!