Review: Soul of a Warrior by Denna Holm 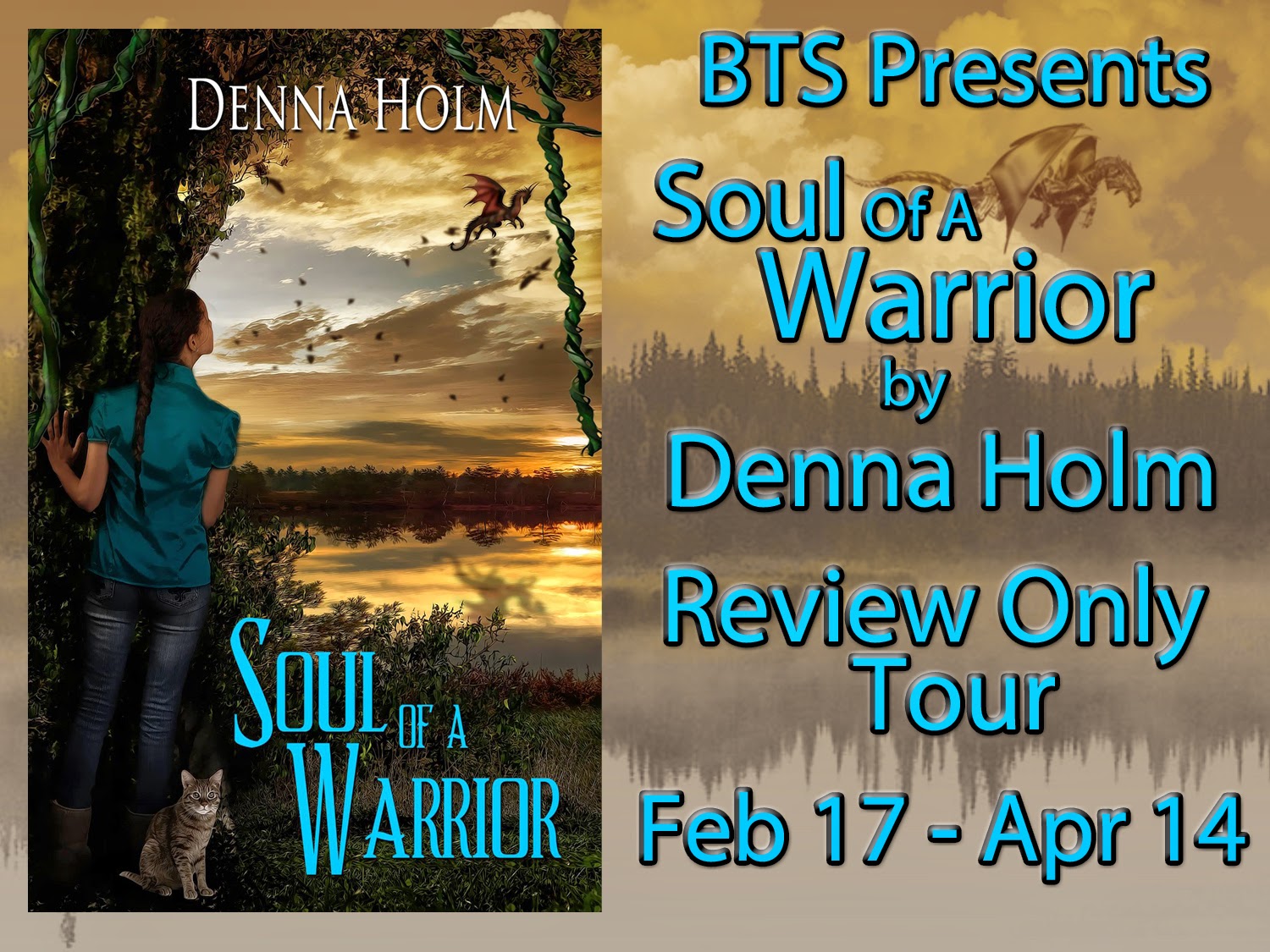 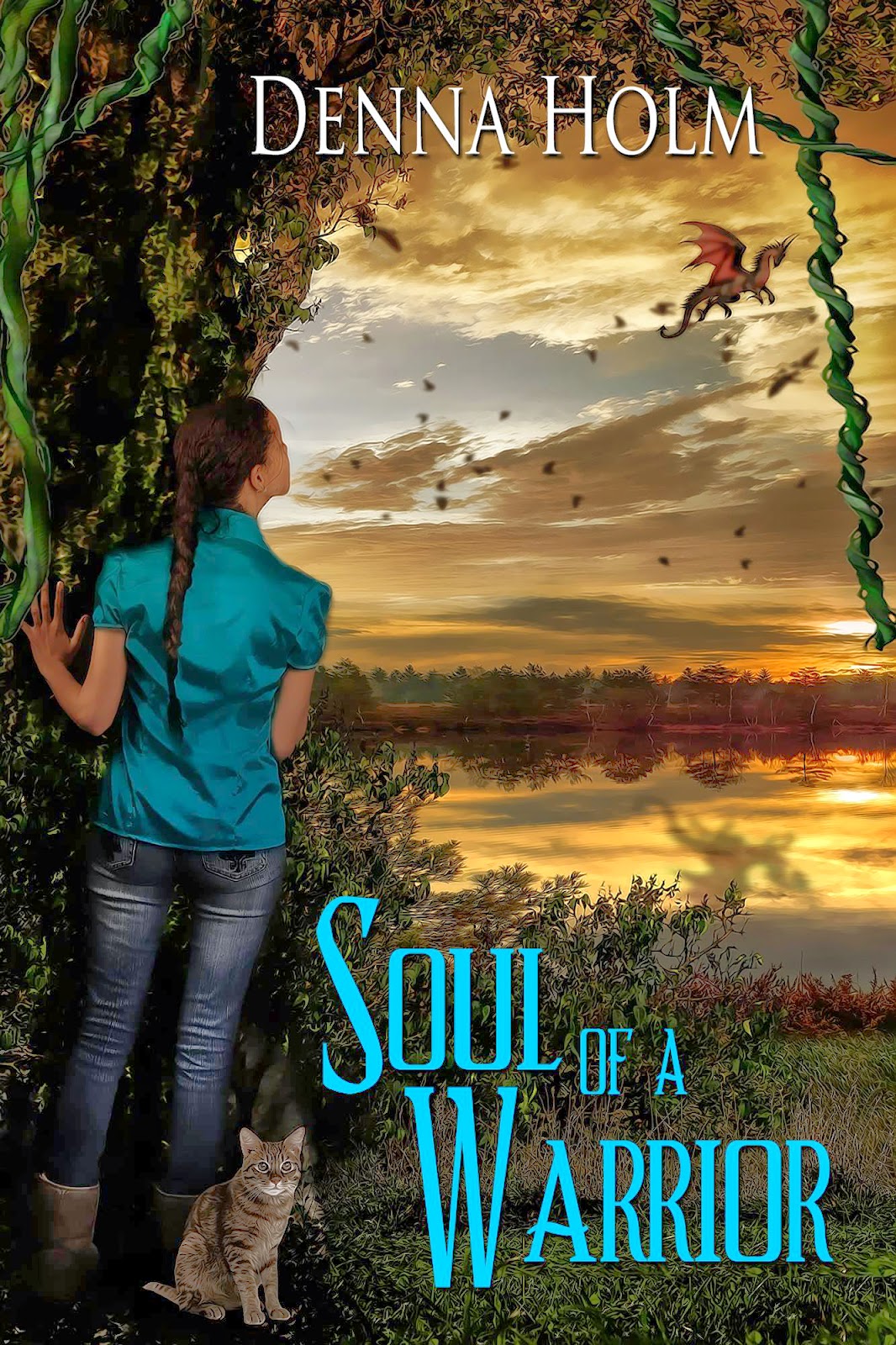 Blurb/Synopsis:
An act of vengeance leaves three friends and their tabby cat abandoned on a hostile alien world.

Kimi Wicker learns the hard way what it means to have the rug jerked out from under her.  It takes on a whole new meaning when the rug being jerked is Earth and she’s no longer standing on it.

Soul of a Warrior is a science fiction romance that sends Kimi, her two closest friends and a beloved cat on an incredible journey to the planet of Lavina.

Kidnapped by a stranger, they must endure the agony of having their bodies stripped down to pure energy, attached to a beam of light and whisked across the cosmos. Abandoned on this beautiful but treacherous world with no weapons and little information, they face the daunting task of trying to find a way back home again.

A retired FEI competitor in dressage, she earned her United States Dressage Federation Bronze and Silver Medals.  At the age of thirty she took a chance and stepped out of her comfort zone, entering the exciting new world of dressage. It’s not a move she ever regretted. In the end she believes much of her western training helped her build a closer working relationship with her dressage partner, a thoroughbred racetrack reject named Oregon Sunshine.

After Denna retired from training and showing horses, she turned her full attention to her second passion, writing novels in paranormal and science fiction romance. She was able to use the unique personalities of her many wonderful students to help bring life to her characters. Denna and her husband Lee make their home in the beautiful State of Oregon with their two loyal German shepherds and three spoiled cats. Animals are given a special part in her novels, their offer of unconditional love a lifeline in this oftentimes difficult world.

Kimi hissed as she lowered her body into the mountain of bubbles. She leaned back, closed her eyes and covered them with a damp cloth. Her body relaxed and she cut loose with a contented sigh and thanked God for deep baths, warm water and lots of bubbles.

Almost instantly the blond guy came into focus, clearer than he’d been earlier in the bar. For a few seconds she saw a relatively normal- looking face behind her closed lids. Okay, maybe not normal. An extremely handsome face, confident, powerful. She squirmed, her groin doing that odd clinching again. She had to fight not to touch herself.

But then his green eyes began to glow, small sparks shooting across them, out of them. His face thinned; his generous mouth pulled into a tight smile. The sparks began to build, finger-like tendrils reaching out for her. Her eyes started to pulse. Against her will, Kimi’s throbbed and tried to match the flickering light. She sucked in a breath and tried to turn away.

“Stop!” She sat up, the washcloth slipping from her eyes. “Christ, I can’t do this!” Her body jerked hard when she started to sob. “Why is this happening? What the hell’s wrong with me?”

“Nothing a little time won’t take care of.”

Kimi froze, afraid to take a breath, her thoughts as quiet as her apartment while she waited to see if he said anything else. She tipped her head, the silence deafening. After a few seconds, she started to relax, sure it had to be another hallucination. And that's when he started to talk—calmly, like initiating conversation with a naked stranger in her bathroom was an everyday occurrence.

“Neyvarre acted the fool tonight when he walked away from you, not at all usual for him, I assure you. But since he did, I’m afraid there is little you or I can do for the moment. To force his hand, I mean. I think it will be best for all concerned if you come with me now. We can work together to form a plan to try to change his mind.”

Kimi wasn’t paying attention to what he said. Her mind raced, trying to come up with a plan of escape. First she needed to build her courage, turn around and make sure he was alone. Part of her still hoped he might not be real at all.

“You might as well face me, Kimberly. I assure you, I’m very real, though I can well imagine you would prefer otherwise. I have no intention of leaving without you tonight, but if it makes it easier to face, I’m no more pleased about any of this than you are.”

He ended with a small chuckle, though there was nothing pleasant about the sound, nothing to ease Kimi’s terror. The tremors running through her body grew stronger. If she wanted to try to escape this mess, she couldn’t just sit there. She needed to do something now, move before she was completely useless.

She took one deep breath and turned. Sure enough, it was the scary red-haired stranger, casually leaning against the doorframe of her bathroom. He had traded the jeans and western-cut shirt and hat for the tight black leather she’d imagined him in earlier. She huffed. “Figures.” But the leather wasn’t the thick, shiny material a biker would wear. His clothes looked soft, like some kind of rich suede.

The stranger laughed and Kimi turned away, her face growing warm.

Every muscle was visible beneath the skintight material, and there were plenty of them to see. When he crossed his arms, they rippled under his shirt. It did nothing to help reassure her that everything would be okay. She began to pant, close to hyperventilating as she forced her eyes to meet his.

The dark shades no longer covered his eyes, though she wished they did. It was easy enough to see from only a few feet away that they weren’t normal. They were yellow, more like an animal’s. He held her in place with those eerie yellow eyes. When he smiled, she screamed.

The high-pitched sound helped to break Kimi free of her paralysis. It must have surprised her unwanted guest as well because his freaky eyes widened as she flew over the side of the tub. She hit the floor with a grunt as her feet slid out from under her, reaching without thought for the fluffy green towel by the tub. Her gaze locked on the small bathroom window she’d cracked before she got undressed. Kimi knew it was her only hope of escape. She probably couldn’t get it open enough to crawl through, but she could scream. Wake people up. They lived on the upper floor of a fairly large apartment building. Somebody would hear and hopefully call the police.

Kimi slid again just as she reached the window and knocked her chin against the sill. She tasted blood, but ignored the pain as she slipped her fingers through the crack and lifted. A large hand closed over her mouth before she could draw in enough air to scream. Another hand clamped like a vice around her waist and jerked her back. The hand left her mouth only long enough to slam the window shut. Instead of returning to her mouth, he reached up to cover her eyes. It made her feel claustrophobic.

She began to kick, scratch or bite at any part of him she could reach. She arched her back and tried to throw her head against his chin or nose, but both her feet slipped out from under her. His feet must have slid in the water when she arched back because they both went down, hard enough to rattle Kimi’s teeth. He jerked her head against his rock-hard chest, his arm still wrapped around her waist; now that his legs were free, he reached around to hook them through hers. But Kimi wasn’t ready to admit defeat.

“Fucking bastard! Let me go!” He laughed, a deep rumbling sound, and all the fire inside Kimi evaporated. Her puny struggles were nothing but a joke to this man. She’d never had a chance.

“Be still,” he whispered against her ear. “You will only hurt yourself.” She tried once more to break his powerful hold, but they both knew the game was over. If he hadn’t been pressing his hand so tightly against her eyes, Kimi would have burst into tears.

“Please let me go,” she whispered. “Don’t hurt me.” She went limp in his arms, but he didn’t relax his hold. “What do you want? I don’t have anything!”

“I admire your strength, Kimberly, and I regret that you must be introduced to your new life in this way. Neyvarre should not have been capable of walking away from you tonight, but since he did, it has forced a change of plans onmy part. Believe me, child, no matter how it may appear to you; I don’t enjoy this anymore than you do. Cooperate with me and we should be able to end this relatively fast. Do not and I’m afraid your life for the next couple of days will not be pleasant. Do I make myself clear?”

This had a really good story line behind it.  I enjoyed the plot, the characters, the adventure, the world-jumping and the fantasy elements.  It was definitely unique, and a good addition to add to any non-traditional vampire lover's library.  I look forward to more from this author!

Wow! Loved the excerpt and the review to introduce me to this story. Thanks!