Review: Two's a Couple, Three's the Law by Eve Langlais 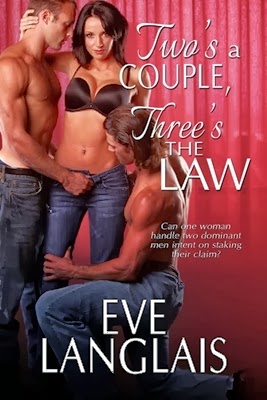 Can one woman handle two dominant men intent on staking their claim?
Warning: This story contains adult subject matter and language that is probably not suitable for anyone. (MFM paranormal erotic romance)
Two’s a couple, three’s a ménage, not to mention the law. Welcome to an alternate world where the government gives tax breaks to women who choose to take on two or more men—and werewolves live amongst us.
Despite the laws encouraging polygamy, Chloe isn’t interested in a relationship with one man, let alone two. But all that changes when a werewolf client decides he wants her for more than just legal aid. He’s not alone though. Her nemesis in the courtroom, district attorney Anthony Vanderson, is also intent on seduction.
Caught between two men—naked and panting—she succumbs to passion, gets embroiled in a mystery and learns werewolves aren’t the only creatures living amongst humans.

This lovely author is a regular here at Close and I hope she never stops writing!  This was a different type of book for Eve.  It still had her normal humor and smexiness, but this story concentrated on building towards a bigger story and...............shocked me to the core with the ending!  It was a fabulous read and I really enjoyed Chloe's character.  She was honest, funny, and definitely not interested in long term relationships.  Can I imagine a world where polygamy is not only legal but encouraged?   ABSO-FREAKIN-LUTELY!!!

So how does this relationship shy attorney end up with not one but two hotties looking to score?  I would say fate is awesome, but we all know that would be pushing it.  What amazes me is who gets her in bed first...lol.  I was pulling for the other guy.  The story line was a good one that was filled with a lot of surprises, especially when dealing with her hunkie guys.  I can't blame Chloe for not wanting to choose!  I would totally get my cake and eat it too!!  I can't wait for the next book!!

I loved this book!!! Eve writes super sexy stories with a great humor added. I have read dozens of her stories and never have been disappointed :-)