Review The Gargoyle Gets his Girl By Kristen Painter 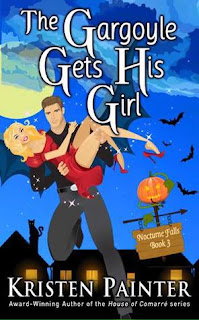 Willa Iscove, fae jeweler, has her first stalker. Really, he’s just one of her lovesick customers. The ring she crafted to help him find new love has backfired, making Willa the object of his affections. In a bid to rid herself of her amorous client, Willa makes a wish in the Nocturne Falls fountain using the piece of opal in her pocket and in doing so, unknowingly conscripts as her guardian the sexy gargoyle on duty.

Former Army Ranger and gargoyle Nick Hardwin has some serious suspicions about the pretty fae who just invoked the ancient pact for protection. Her kind have been at odds with his kind for ages. Now she wants his help? He’s determined to figure out what she’s up to. Which won’t be a hardship considering how much fun she is to be around. And kiss.

But then her stalker turns out to be the tip of the iceberg and things go really wrong, really fast. When Nick and Willa are both kidnapped, Willa is forced to make a hard decision. The life of her family or the freedom of the man she’s fallen for?

Another fantastic love story to add to our growing collection of favorites!!  Our leading lady in this book is none other than the magical ringmaker herself!!  Willa is unique in the fact she is the only one of her kind in this small town which makes dating a little hard.....at least until a sexy shifter barges into her shop.  Sparks fly and Willa dares to hope that her lonely nights may be coming to an end.

Entranced by her midnight plea for protection, Nick makes it a point to find out all about this lovely lady that is in need.  An old hatred of her kind is buried deep along with the fear that she may try to enslave him.  The problem lyes within the make that it seems like a very promising fear.

Willa and Nick are sucked into a brewing war in which Nick's fears are far from unfounded.  Willa is reintroduced to a family that she estranged herself from and society that she longed to escape.  After the dust settles and the day in won...can she go back to her home?  Will Nick still want her?

This was an amazing story to add to this already popular collection.  I have enjoyed each and every little part of this town and cannot wait to see who pops up next.  It limitless and the series could go on for a good while which is my fondest wish!!  Then Halloween would be as close as opening the next book!  Another five-star read to add to this delightful series!!

Posted by Unknown at 1:38 AM No comments: