Giveaway and Tour Kickoff with Heather Frost and her book Seers 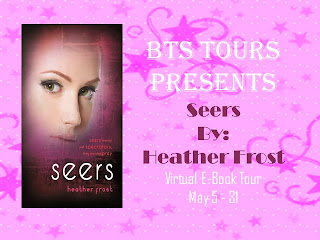 Welcome to the official kickoff of Heather Frost's virtual E-book tour!!  I'm so excited to be able to host her and offer a wonderful giveaway of an autographed hard-back copy to one lucky US follower and a digital copy to evryone else!!  Let's take a look at the book: 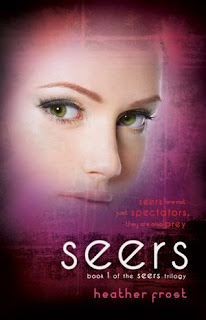 For Kate Bennet, surviving the car wreck that killed her parents means big changes and even bigger problems. As she begins to see auras and invisible people, Kate must learn to trust Patrick O'Donnell, a handsome Guardian, or risk her life being overrun with Demons. She soon realizes that both she and her heart are in big-time trouble.


Lee had been my best friend since second grade, when my family first moved into the neighborhood. Though our personalities were as different as night and day, we understood each other. Lee always made me find something to laugh about, which was an invaluable talent lately. Her parents were divorced, and she lived with her mom. Every couple of months or so Lee would go through a new fashion phase. Summer had been the ‘70s for her, with the occasional ‘60s outfit thrown in. (She actually made a really good hippie.) This month she was rocking the Gothic style. Next time? No one really knew. My personal favorite had been the ‘20s. Lee had not only worn the beads and dresses, but even the hats. She looked like she'd just stepped out of an old silent movie. That bespoke the type of dedication people just don't see today—except maybe in terrorists, or nuns.


I pulled up to the familiar house and in seconds Lee was closing her front door and crossing the yard. Her hair had once been brown; of course, it had also been blond, white, blue, purple, and magenta. Today it was black as pitch. It hung in long sheets on either side of her face, which looked unnaturally pale due to all the makeup. She'd applied her makeup religiously, smearing black lipstick over her usually pink lips, and the shadows around her eyes were impressive. She'd even gone so far as to get a nose ring, which I thought was taking it a bit too far, personally. But that was Lee—she loved to make people stare.


Her clothes were also perfect for the part—the leggings, the boots, the black sleeveless top. She never did anything halfway. But unlike most goths, who were surrounded by gray auras, Lee was surrounded by a mixture of blue and yellow.


She opened the passenger door, nodded wordlessly at the twins, then sank into the seat.


“Hey,” she greeted me, slamming the door and instantly reaching for the iPod to find a new song. The twins were so deep in their argument they didn't even notice.


“Hey,” I returned, cautiously pulling away from the curb and into the empty street. “The nose ring is . . . a good touch.”


“Hurts like a mother,” Lee informed me, starting a song with lots of thudding bass. She turned up the volume, settled back in her seat and then looked at me for the first time. “In a word, don't. Ever.”


“I wasn't planning on it,” I assured her, cracking a small smile.


“So,” Lee gusted, slapping her hands on her knees. “Here we are—seniors. Weird, huh?”


“Yeah. It really hit me this morning.”


She bobbed her head, but didn't say anything. Aside from the music and the twins, we drove in silence. But things were never awkward with Lee. She always knew exactly what I needed.


I dropped the girls off at the nearby elementary school and wished them good luck. Josie didn't say anything, only shouldered her bag and walked quickly toward the soccer field. I decided not to mention that the bell would be ringing soon.


Jenna sighed and shoved her novel into her backpack. “You too, Kate. And don't worry, I'll have a good day, as long as the Nameless One stays away from me.” With that she slipped out of the car, shut the door, and walked toward the school.


Lee whistled lowly. “Were we ever like that at that age?”


“I think we were worse,” I said simply. I glanced out my window, searching for a break in the traffic so I could pull away from the curb. A van rolled slowly past and I found my opportunity to slide in behind.


As I started inching toward the parking lot exit Lee turned in her seat to stare at me, quieting the music as she did so. “So, how you doing?”


I shrugged a little, keeping my eyes on the maneuvering cars around us. “I'm still psychic, if that's what you mean.”


“I wasn't meaning that,” she hinted delicately.


I nodded once, braking as the SUV in front of us stopped to let some obnoxious boys dart towards the school. “I know.”


“Are you at least talking to Aaron again?” She persisted, unwilling to drop the subject. Best friends could be annoying that way.


I exhaled loudly. “We texted for an hour last night.” I shrugged a single shoulder. “I guess we'll see what happens in person.”


“You're just going through a rough patch. It happens in all relationships.”


“He said I was taking too long to recover,” I said stiffly, my voice pained despite my best efforts. “He said they're gone, and I should just move on. Focus on us. On now.”


“So he was a selfish idiot. So are all guys. At least Aaron isn't always a jerk. He's actually a decent guy most of the time.”


“I know,” I said, inching past a slowly turning car. The moment the car had completed the turn and we were clear, I lurched quickly past them. “We'll just have to see how today—”


My words clogged in my throat and I gasped, fiercely slamming in the brake and clutch. The car stopped violently and Lee screamed, grabbing for the dash. My seatbelt bit into my body painfully, reminding me of old bruises. I blinked rapidly and stared at the idiot standing in front of the hood—the one who had caused my gut-wrenching panic.


He was too old to be a student here. Probably in his early twenties—maybe twenty-one. He had dark brown hair, and the brown skin of a Hispanic. He was dressed in jeans and a blue T-shirt. He was peering directly into my eyes through the windshield, looking calm though just a split second before he'd stepped right in front of a moving car.


Lee was cursing in her seat, slipping back into a habit she'd been struggling to break since she was fifteen. For once, I wanted to join her. I could have killed him!


“What's wrong with you?” Lee panted, her voice mixed with fear and some anger. “Warn me the next time you decide to randomly test out your brakes, okay?”


“What?” I gaped at her, breaking my gaze with the idiot so I could exclusively regard my best friend. “But didn't you—” I couldn't think of what else to say—the words seemed crazy enough in my head. I gaped at her a second, then glanced back out the windshield. I completely lost my breath.


The man was gone.

And now for the fun part!!!  Just fill out the rafflecopter to win!!!  Good Luck and enjoy the rest of the tour!!

What made you come up with the idea for "Seers"?
And thanks for the great giveaway!

How many books will be in the series? This book sounds amazing. Can't wait to read it. Thanks for the giveaway.

Are you a reader as well as a writer?

Seers is an awesome read. I wish you all the best on this tour :)

Sounds marvelous! Can't wait to check out the other stops on the tour. Good luck!

What happened to the guy? I want to know.. Can't wait to read the book. Thanks for the post.

Thanks for all your beautiful comments!
Lisa Cox: The idea for Seers came from my desire to explore ideas about the afterlife--and I think I was pretty bored during the summer of 2010. :) You are welcome!

Joanne: There are three books in the series: book two, Demons, will be out this September! Thanks for your comment!!

Paige: I am totally a reader! And I have to admit, I love the classics. :)

Denise: Thanks! This tour is going to be a lot of fun, I think!

Shadow: I simply love fantasy. That was the first genre I explored as a young writer, and I'd love to do more with it. I also think it would be fun to write dystopian.

searching4princecharming: Thanks so much for your interest! Hopefully I'll "see" you at the next stops. :)

How Did You Come Up With The Characters For This Book.

This book sounds fantastic! I would love to be entered to win a digital copy of it. Thank you so much for the giveaway opportunity and best of luck on your tour!

When did you realize that you wanted to be a writer?

I must tell you, demons are my favorite thing to read about besides vampires. What gave your the inspiration for this story? What's your view on demons?

Thank you Nikki for introducing me to another new author!
Great excerpt. I also can't wait to learn more about Patrick! lol
Thanks again...

Lovin' these comments! Thanks so much for reading. :)

AprilAlvey: These characters were all pretty easy for me. Most of them have personality traits of people I know. The funniest thing about my characters is that out of all the "main" characters, Kate--my protagonist--was the LAST one I developed.

Sarah Elizabeth: I dfinitely do not see invisible people. :) Not sure I'd want to, actually....

Sandy: Thanks for your kind words, and for stopping by!

Leigh Savage: I've always wanted to be a writer. I didn't get serious about publishing until I was about 16, and I didn't get my first rejection until I was 18. But writing has always been a big part of who I am.

Molly.Frenzel: :) I think Demons are fascinating--Finding the motivations for the different Demons in my world has been one of my favourite parts of the Seers trilogy. As far as the inspiration....I think the afterlife is interesting. I have my strong religious beliefs, but I wanted to explore them in a fictionalized way--and ta-da! Seers was born.

Have you every had your own encounter with the paranormal?

Has writing always been your passion?

do you base your characters off of people you know

how do you come up with the name for your characters and how many books are their going to be in the series?