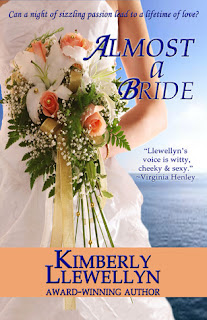 Award-winning author, Kimberly Llewellyn, introduces a sexy fun story about two people who discover they have a lot more to share between the sheets than they ever bargained for.

Ivy Hammond got dumped at the altar, all because she was too much of a good girl in the bedroom. So when a research study on sex appeal needs participants, she jumps at the chance to learn what it takes to be sexy.

Kip Lockehart owes his foster brother his life. He repays the debt by agreeing to participate in a new sex appeal study. From the first sizzling assignment, Kip is immediately intrigued by the lovely Ivy, who’s innocently curious about what makes a woman sensual. Kip is more than happy to show her. But as each passionate assignment brings them closer, he fears they may break the study’s number one rule―don’t fall in love. But when he can’t stop picturing Ivy as his bride, he sets out to convince her some rules were made to be broken.

This was a really cute funny story.  Ivy's fiancee broke it off a month before their wedding.  He told her in no uncertain terms that she wasn't adventurous enough in bed.  Ivy has kept tight control of herself ever since her mother died and her brother has run away.  She channeled all of her frustration into doing good deeds and helping her father prepare for running for mayor.  But Ivy has loads of repressed sexuality and she always imagined that after she was in a secure relationship (i.e. married) she could finally let go.  Travis breaking it off with her was the last straw.  She needed to do something for herself in a safe controlled environment as to not hurt her father's career.  When she comes across an article for a sex appeal study, she feels like she has found her chance.

Kip was done with relationship.  His first relationship with which his "common-law" wife had taken half of everything and his freakin dog.  Anyone that says they don't consider common-law an actual marriage anymore should tell that to her lawyer and the judge.  His second relationship was equally disastrous.  His VP and himself had started working late nights together and one thing had led to another.  Then he found out that she had been embezzling from his company.  He just has no luck with the women in his life, so he has sworn them off.  When his brother calls him to ask him for favor about a sex appeal study he is running, Kip inwardly groans.  He has to help him out because he is calling in a favor.  But Kip doesn't count on his reaction to Ivy's picture or the amazing reaction to her physical presence.

Ivy does everything wrong in her innocence to basically corrupt and destroy the study.  She makes several humorous mistakes that lead to some hot and steamy role-playing.  The sex is off the charts and Ivy finally had an orgasm with a man.  But Kip has a hardened heart and the study has some shady dealings that finally come to light.  Can the two of them save what is budding between them or will their pasts and careers destroy them?  Especially when the findings in the study are released?  This was a really cute read with some humor sprinkled in.

Thanks, Nikki, for reviewing Almost a Bride. I think the good-girl/bad-girl dilemma is something we can all relate to!

I can definitely relate to it! It sounds like a fun story, would love to read it!

Thanks for bringing this to my attention. It sounds like a good read!

This sounds like a sweet little read. It actually sounds really familiar so now I'm trying to remember whether or not I've already read it...

I read this book earlier this week and it didn't disappoint! It's a fun, easy read.