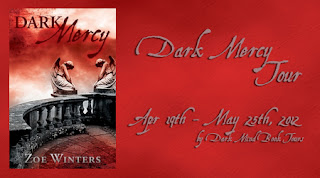 Welcome to this stop on Dark Mercy's virtual tour!!  I have the pleasure of sharing a sneak peek inside the book with you.  If you would like to follow along with the tour, click here: http://darkmindbooktours.blogspot.co.uk/2012/04/dark-mercy-tour-schedule-now-posted.html  Now lets take a look at the book details: 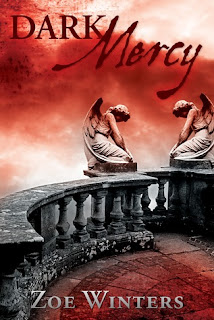 Angeline has been on the run from her sire, Linus, for centuries. She’s tired, and she’s lonely. High from mescaline-induced blood, she sees a sign—a church that seems to glow in the distance—and she knows. Her future mate is in that building.

Dark Mercy is the beginning of Hadrian and Angeline’s story, not the end. Their HEA will happen later in their own full-length novel. This story is important both for the overall series and for this couple, but it’s not their HEA. Just a mild disclaimer so no one goes in with false expectations for this story.

“A-Angeline. I haven’t seen you here in awhile.” Could he not get that schoolboy stutter out of his voice?


“I was fighting temptation,” she replied coyly.


Hadrian cleared his throat. “And did you succeed?”


She glided closer—or floated. The length of her dress made it impossible to tell which. She stopped mere inches in front of him. He should have taken a step back, should have excused himself, but her strange eyes locked with his. They drew him in, hypnotizing him.


If he were another type of man, he would have proclaimed she was a witch putting him under a spell, but it was just as much his responsibility as hers for not moving away. It was his fault for not finding a replacement for midnight Mass.  His mind became fuzzy.


What was I just thinking about?


Her eyes pulled him in, making the rest of the room swirl around him in a slow blur. If he’d looked down to find them both floating and spinning in the air, he wouldn’t have been surprised. He was dizzy from the delicious scent emanating from her.


Her voice was a siren’s song when she spoke again. “Forgive me, Father, for I’m about to sin.”


Angeline’s mouth tasted like hot cinnamon candy as her lips descended on his. Her lip gloss left his mouth tingling. She might burn him alive with a single kiss. She chuckled as she continued her exploration of his mouth, as if he’d stated his thought aloud and she found it amusing.


Somewhere deep inside him was the place that was screaming that this must not happen, but it sounded like it was shouting from far away down a long, dark hallway, disappearing into a tinny echo. Quickly overtaking that voice was one penetrating thought that refused to release him.


Her lips left his mouth and made a burning trail over his cheek and up to the lobe of his ear. “Father Hadrian.” It was a breathy pant that held all the promise of a new universe unfolding.


He couldn’t remember what she said after that or even if she said something after that. The pounding of his own blood rushing through his ears—and other blood racing south in response to her nearness—had drowned out his ability to think or hear anything else but the lilting magic of her voice calling his name.


Her tone had gone from that of an angel to a writhing serpent as she rubbed her sinewy body against him. This was wrong. The thinking part of him clawed to get out. Something was all wrong about this, beyond the breaking of a vow. But he couldn’t form a coherent thought.


“And you shall have me. Forever,” she said.


Had he spoken out loud? He wasn’t sure.


“I don’t know what’s wrong with me right now,” he said, as her fingers slid under the Roman collar.


It startled him. His collar. Where were his vestments? There were more layers of clothing, or there had been a few moments ago. He glanced down to find the vestments somehow on the floor of the sanctuary. He started to pull away.


His gaze shifted back to her eyes and his will merged with her again. He didn’t realize his shirt was off until the air from the chilly room hit his bare chest.


“Oh, what a surprise. You must work out. Don’t be shy, Father Hadrian. It’s a crime you never get to be inside a woman with this body.”

Thanks for sharing this excerpt! I loved it! I can't wait till we get the rest of Hadrian and Angeline's story.