Review: The Road to Dark Desire By Brooklyn Rivers 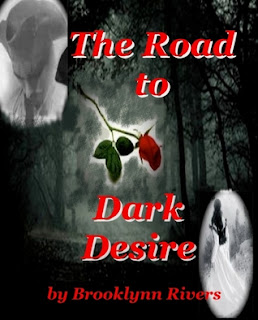 An injured highwayman with a bounty on his head. A lady determined to save his life. Who will sacrifice the most in the name of love?

Quentin Ellesbrooke has it all until he is betrayed by his lover, Katherine Prescott and her evil stepbrother. With danger nipping at his heels, the Ellesbrooke Bandit gets more than he bargains for when a beautiful lady saves his life. Soon the battle between honor and forbidden lust will begin.

Skyler Weston is about to embark on an adventure wilder than she could ever imagine. After rescuing a stalwart highwayman from the brink of death, she becomes entangled in a web of hidden pleasures, danger and intrigue. Can this highwayman be trusted or is he a gentleman rogue out for his own gain? Seduced by his mysterious past, she is torn between protecting her virginity and succumbing to the dark desires that lie dormant within her soul.

Historical romances were my first love.  I love escaping in a different time and pondering the endless possibilities of seduction and love. It is so much more romantic than our own time. It is delightful novels such as this one that make me fall in love with the genre all over again.  This book is a unique mix of Robin Hood, Romeo, and Rapunzel.  And obviously, this is the formula for a great historical read!!

Quentin is a highway, not by choice, but by circumstance.  It seems his heart caused him to forsake his good sense when he began having an affair with Katherine.  She took him to the cleaners and ended up with everything that once was his, to include his estate.  And then she came back for more.  Instead of being suspicious and cautious, Quentin falls into her trap once again.  This time the situation almost costs him his life.  He barely escapes and lies bleeding from a gunshot wound somewhere in the middle of the forest.  He is rescued by an angel that changes his life forever.

Skyler was out for a walk with her best friend Josie when she spies first the hat and then the man.  She at first thinks his dead until she hears him moan.  She convinces Josie to help her drag him to a nearby cottage where she can tend to his wounds.  It seems luck had been with the man for the caked mud that covered the wound had stopped the bleeding.  Skyler patched him up but could not help the stirrings of need tat sprang to life just by looking at him.  This man was dangerous, not only to her wallet, but to her virtue as well.

Ah this was a great read!!!   The story sucked you in and held you riveted on the edge on several points in the story!!  The was fast moving and deliciously entertaining.  Sky was my favorite character in the book.  She was strong-willed and knew what she wanted, which of course was Quentin!!  I highly recommend this book to all historical romance lovers!!  This book really made my night!!