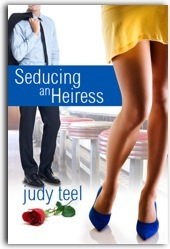 An heiress changes her identity and starts a new life away from her father’s ruthless, self-serving world, only to find herself falling in love with the slick, corporate player her father sends to bring her back.

Dakota is tired of being a pawn in her fathers never-ending need for more power and money.   She plans to escape him and turn her life into something she creates.  She chooses a sleepy little town to begin her dream and open up her own restaurant.  Eight months later she is living in bliss.  She has her own apartment, a job she loves, and friends that like her for her and not for her money.  She is still afraid that her father may find her even though shes covered her tracks very well.  What she doesn't count on is her fathers right-hand man to stubble upon her or the attraction she feels burning her slam up.  Will she ever learn her lesson?

Trey has just about burned the time line up searching for the missing heiress when he stumbles upon her.  Her disguise might have fooled a lesser acquaintance, but he prided himself on his eye for details.  So he was going to use every means in his disposal to get her to meet with her father.  That was the deal.  It shouldn't be too hard to get a spoiled princess to come back into the lap of luxury.  She had been out of it long enough to want the taste of it again.  All he had to do was find out what she wants and give it to her.  So why does he go into this feeling like his life is about to change?

Change it does!!  Trey is unexpectedly impressed by Dakota's strength and determination.  As he pursues her with his own agenda in mind, he begins to reconsider his approach.  He discovers that she isn't anything like he first thought and finds himself thinking about her A LOT.  Will he turn her back over to the one person she truly hates? Or will love triumph?  This was a really cute short enjoyable read!!  Its one of those books you will walk away from with a warm-fuzzy feeling.  Great read!!!