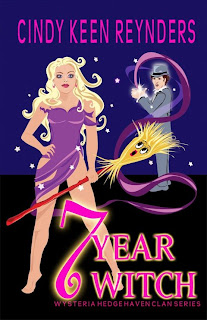 Novice witch Miranda Rose’s seventh and final task for the Supreme Witch’s Council is to find the legendary Philosopher’s Stone. Once completed, she’ll reach her lifelong dream—High Witch of Wysteria Hedge Haven. In a last ditch effort to locate the precious gem; she travels through time to 1877. In a dilapidated castle a powerful wizard refuses to relinquish the stone. In a fit of pique, the wizard, Balthazar, zaps her in a field outside of Merry Olde London.
Sir Maxwell Chadwick is the sole witness to a fiery ball of light streak across the midnight sky. Curious, he investigates. Surprised to find a beautiful young woman among the smoldering ashes, he cannot deny his instant attraction to the alluring stranger. While Miranda appreciates the handsome duke’s assistance, she finds him annoying as his well-intentioned interference delays her mission.
It doesn’t take Miranda long to realize the handsome duke holds the key to her heart, as well as her future. Fate, magic and the Seven-Year Witch disease takes the lovers on a rollicking, star-crossed adventure!

Ok, this book was amazingly cute!!  Miranda was the seventh daughter in a family filled with over-achievers.  She usually ended up feeling like the odd witch out.  It has taken her an exceedingly long time just to achieve the title of high witch, let alone any other titles. It seems she has trouble reading spells, which ends up making her magic unpredictable and her escapades delightful!   The last task that as been put to her is finding a stone.  After she finds the location of the wizard who has it, she jumps time in order to hopefully talk him out of it.  She is shocked at what she finds and even more so when she is zapped out of the castle and into the path of one very HOT Duke!!  And just as luck would have it, the first guy Miranda is attracted to in years also makes her sick!

Sir Maxwell Chadwick was just coming back from having a few drinks with some friends when he stumbles upon a very unlikely package!  The recently made Duke has had little time for socializing and was rarely among his friends.  His new responsibilities  have made it impossible to have a life.  He witnesses from his carriage window a ball of light streaking across the sky to land not to far from him.  He discovers among the smoldering ashes a very beautiful girl who he is immediately attracted to.  She has a strange way of speaking and her clothing (or lack of it) is tattered and covered with ash.   Amazed at the unexpected response of his body, he begins to question the reality of the situation when she produces a broom and proceeds to fly away.  He begins to doubt what really happened until he awakes and finds her in his bed!!

Upon leaving Max, Miranda immediately  begins to fall ill.  She arrives at her Aunts house and asks for her assistance on what she needs to do to cure herself.  The answer comes from a surprising source as more characters are added to this delightful tale.  But the cure for this ailment afflicting Miranda includes taking time off from her search for the stone in order to pursue it. In the process of curing herself, Miranda stands the chance of losing her heart.  Can a Duke with a painful past create a lasting relationship with a 700 year old witch?  This story was completely entertaining, with large bits of humor sprinkled in . I really enjoyed the story and can;'t wait until the next installment.  Hats off to Cindy for creating a lovely world of witches!!

What a cute cover! I just started reading paranormal romance and am enjoying it. I will have to check this one out.
Mel
bournmelissa at hotmail dot com

I love paranormal romance. Thank you for introducing me to a new author!

This looks great! I cannot wait to read it!
lavendersbluegreen(at)yahoo(dot)com

This looks like a hoot of read. I love a book that gives me an underdog to root for and a few giggles. Thank you for sharing.