Giveaway and Spotlight On: Razzle Dazzle by Elisabeth Morgan!!! 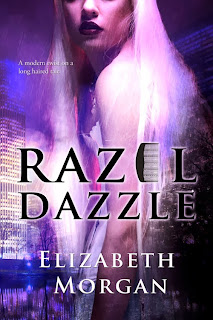 Razel Dazzle
A modern twist on a long haired tale....
By Elizabeth Morgan

Blurb:Will she let down her hair for the man of her fantasies?Famous for her long, golden hair and beaming smile, Razel D’Punz is the hottest model in the industry. But although most women would kill to get ahead in this profession, Razel lives an isolated life; one she has learnt to accept...until she meets Matthew Prince, a new photographer in the business.Refusing to let her mother/agent’s strict rules stop her from spending time with the man of her fantasies, Razel quickly discovers that one night with Matthew isn’t enough....And neither is the life she is chained to. Something will have to change if she is ever to get her very own Happily Ever After.

They were two beautiful people. Both strong and healthy, exactly what she was looking for.
The male was at least six foot, slender, but his body was firm. His light brown hair was slicked back, making his jaw-line and chiseled cheekbones more defined. His eyes were firmly fixed on his partner as they attempted the triple spin.
The female—such a petite thing with snow-white skin and a dazzling set of white teeth. Her blue eyes shone as she gazed up at him from a slanted dip. Her golden hair was tied up with stray curls hanging around her face.
Such a beautiful couple. They will do perfectly. She waited for the show to end.

Elizabeth started life wanting to be an actress because she loved entertaining people. She enjoyed nothing more than being able to make people laugh and to help distract them from reality for a few hours.

She studied Musical Theatre in college, but during her second year, her mind started to overflow with story ideas, so she began writing plays. Slowly, over the following three years, she wrote more and more, channeling every ounce of her imagination into the written word.

And now, here she is, years later, hiding away like a hermit in her little cottage in Cheshire, England, writing like crazy and loving every minute of it.

Where to find Elizabeth Online: