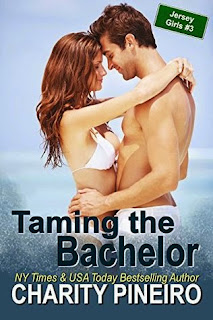 TAMING THE BACHELOR
Contemporary Romance from
NY Times and USA Today Bestseller
Charity Pineiro
Brad Evans doesn’t understand why a woman like Daisy Ramos would be interested in a guy like him. . .
She's the first woman who’s ever made him consider giving up his beloved bachelorhood, but falling for her presents all kinds of problems. For starters, she’s one of his partners in a successful biotech company. But worse, she’s the kind of woman who will drive a man to distraction and Brad’s not sure he can risk losing his focus or his heart to Daisy. But he can’t ignore that whenever she walks into a room, he wishes things could be different between them.
Daisy doesn't believe that a confirmed bachelor and beach dude like Brad will ever walk down the aisle . . .
Especially not with a woman like her. She’s known Brad for years and knows he’s never serious about anything. He flits from one woman to another and spends his free time playing volleyball on the beach. He’s not a forever kind of guy and her determined workaholic mind warns her that he’s absolutely the wrong man for her, but her heart says something else.
Daisy sat at the end of the couch opposite Brad, picked up her drink, and took a tentative sip. It was expertly mixed, with just the right amount of alcohol. What else should she have expected from a bachelor and playboy like Brad?

Taking another quick sip, she looked over the rim of her glass at Brad, who was busy with his own drink, sampling it and smiling.

He glanced at her and raised his glass in a toast. "To good drink, good women, and good music."

His comment prompted her to realize he had put on the stereo during her brief absence. The soft subtle sounds of Sarah MacLachlan flowed out of the speakers. Definitely not what she would have expected Brad to pick out of her stack of CDs.

"Nice choice, but surprising," she confessed and gauged his response over the edge of her glass of gradually diminishing margarita.

Brad took a big gulp of his drink and gave her an equally big grin, displaying his perfect white teeth and the boyish dimples that drove her crazy. "My little flower. You always assume the worst of me, don't you?"

Daisy shrugged, intent on not letting him get a rise out of her. That invariably led to a fight and she had no interest in battling him tonight.

"No. It's just that you always struck me as a grunge kind of guy. Or are you too old at thirty for that mosh pit kind of stuff?"

Brad mocked a wince and put his glass down. "Ouch, Daze. Cut me a break, would you. On top of thinking of me as shallow and chauvinistic, now you think I'm too old for you? Not fair, sweetheart. Just because you're all of twenty-eight – ”

"Only twenty-four," he stammered. "You started college that early?"

Daisy nodded and sipped her drink, trying not to show her hurt at his forgetfulness of her age. After all, they'd known each other all of seven years, right.  You’d think he know her age, but then again, what did she expect from someone who was not the perfect kind of guy.

"I started at sixteen. I was done at eighteen and went for my doctorates right after that."  She wished they could get off this topic. Men invariably became uneasy when faced with her accomplishments and her age.

"Wow. You are something, Daze. I've always said that," he replied, surprising her with his candor.

Daisy wasn't dissuaded. "The 'something' you generally think I am is far from flattering, Brad."

Brad shot her an embarrassed glance before looking away. "Yeah, well . . . I'd shock you senseless if I suddenly started singing your praises, but . . ."

He hesitated, met her gaze squarely and once again, broad-sided her with his devil-may-care grin. "As a mature man, I've learned the error of my ways. I've been hoping you noticed the change."

Daisy chuckled, unable to resist his boyish charm. "Now, Brad. If I started singing your praises like the rest of your groupies, where would that leave us?"

She regretted the words the moment they left her mouth since his mood suddenly changed, growing way too serious.

He shifted to the center of the couch where he could pluck her glass from her hand and place it on the coffee table. "Since I'm feeling all warm and fuzzy from the drink, it seems like a good time to ask since it gives me an out," he admitted. "Where would it put us, Daze, after all these years?"

Daisy was feeling all warm and fuzzy as well, but it had nothing to do with the drink and everything to do with Brad. In the background, there was silence for a moment, and then the sexy, sensual sounds of a song about surrender. Daisy acknowledged for the first time just where she wanted for them to be.

She moved, only a few inches, and cupped Brad's cheek. Beneath her palm, his beard was soft and a muscle ticked along his jaw. She moved her hand, running her palm across his lips, and against the chill from the drink.

Brad had never felt anything sweeter, anything more desirable than the gentle sweep of Daisy's hand across his lips. For so long he had wanted her, but had been afraid. After all, Daisy was the kind of woman every man wanted and yet every man avoided. Beautiful enough to bring you to your knees and sharp enough mentally to cut you down to size when necessary.

In the past, she had made her opinion of him quite clear, just as he had offered up his own sentiments on her domineering personality.

But lately, and right now in particular, he had sensed a change coming in their relationship.
And tonight, there was nothing that was going to keep him from taking it farther.


You can purchase TAMING THE BACHELOR here:

I loved the fact that Daisy was a smart (genius level) workaholic.   I was reminded of myself and felt an instant kinship with her character.   She had so much going on but she made time for her family and friends.  Brainy chicks always fall for their seemingly opposite, but the surprise was that Brad was indeed a lot more like her than first met the eye.  He had a rougher path throughout his life and hid his own insecurties behind a mask.   The chemistry was undeniable but it was more sensual and an endearing romance as opposed to fire red hot.  (not saying that some scenes weren't hot..lol)

I enjoyed this book imensley and can't wait to check out the rest of the series!!  This is one of those books that will have you daydreaming about falling in love all over again.  Another sweet read by the remarkably talented Caridad!!