Hello and Welcome to this stop on Jessica's Tour!  I admit, I have been quite curious about her books for a while and was thrilled to see her name pop up on the tour sheet!!  I couldn't wait to get a taste of her work and I was not at all disappointed!!  Let's take a look at the book details: 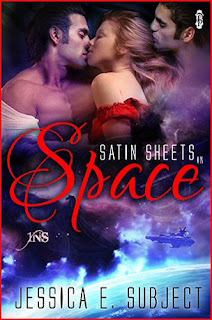 
Available from Decadent Publishing and other ebook retailers.


Danyka's unusual height and radiant red hair earn her the cold shoulder from any guy she approaches, unless he wants to experiment with a giant. So when her boss sets up on a one night stand, she hopes for a prince but expects the usual toad.


As a captivating stranger whisks her away from the ball and introduces her to his equally gorgeous brother, she fears her fantasies have become a nightmare. Has she finally given into impulse only to become a lab rat in an unknown world?


That’s it, I’m leaving. She didn’t need to stick around and be reminded of another night she’d been stood up by a blind date and passed over by every other available male.


After slipping her shoes on and grabbing her clutch, she headed for the door.


She shivered at the sound of the deep, sexy voice. Spinning around, she gazed up at an enormous, captivating man. Very rarely did she meet a guy so much taller than herself. His black velvet justacorps fit tight across his broad shoulders, but not too snug. And the silk shirt lining his wide chest matched the color of her dress. Almost as if they were made for each other. I can only hope.


Flowing down his back, his long, thick, dark mane appeared to have feathers throughout. In the dim lighting, his hair, and even his skin had a faint blue glow. She couldn’t help but be enthralled by his presence; was sure she stood in front of him with her mouth hanging open.


“When the night is still so young?” He brushed his hand down her bare arm. “What could be more fun at home? Perhaps you might even enjoy some company?”


How she’d love to spend the night in this man’s company, the toys in her nightstand long forgotten. But this had to be some kind of joke. She looked around for cameras, anxious faces. No one as hot as this man could want to spend a night with her. “It’s been a long day. I was stood up by my date, and my friends no longer need me to stick around.”


Great! She’d just told the guy she was alone. Might as well have put a target on my back.


He rested his hand on her hip, sending intense sexual energy zinging straight to her core. “You mean you wouldn’t want to enjoy an evening in my company? Because I’m your date.”


Jessica Subject started writing to encourage her daughter to read. Now she writes to keep herself grounded. Although she reads many genres, she enjoys writing Science Fiction Romance the most and believes everyone in the universe deserves a happily ever after. She lives Southwestern Ontario, Canada with her husband and two kids and loves to hear from anyone who has enjoyed her stories.

You can follow the rest of the tour here:  http://cblspromotions.blogspot.com/2012/06/scheduled-vbt-satin-sheets-in-space-by.html  Just fill out the rafflecopter for your chance to win a copy!!  Good Luck!!
a Rafflecopter giveaway

I don't think I've read any alien books. We'll have to rectify that!;-)

I read too many alien books. The smuttier the better. Eve Langlais writes hot aliens. Laurann Dohner's Zorn's are HAWT. What about the guys from Cheryl Brook's Cat Star Chronicles...yum! HA.

I played around with your rafflecopter too. I'm thinking about using it on my blog. Thanks for your comment about your opinion on it too. I appreciate it.

I've read tons of alien books. LOL, maybe I should just say I've read tons of books. All the guys are HOT in some way or another. At this time, I can't remember any of the guys' names, LOL. Too many books, not enough memory.

Haven't read any alien books. It'll be a first for me.

I don't remember the name of the book but it had an a feline alien whose tongue was rough just like a cats. He used it in interesting ways! LOL!

I really liked your review Nikki, you have definitely convinced me that “Satin Sheets in Space” is a Book not to be missed. I can’t wait to read Dany & Her 2 Hot Alien Twins’ Story.

I would very much appreciate the opportunity to be considered in your very generous giveaway of an E-copy of "Satin Sheets in Space".

Octavion from Bound by C.K. Bryant :)

I think I would go with Jaid Black's Trek Mi Q'an Series!!! I really liked the story!!!

I haven't read any alien books. Just Gena Showalter's book, The Stone Prince have alien, but not alien story.

I've only read some of Stephen King's like Tommyknockers...does that count? Not really any hot aliens though

I do have a couple alien books by Eve Langlias...hot purple aliens gotta love them!!!

I can think of all kinds of alien books off the top of my head... but absolutely none are coming to mind that are erotic...hmm. I sense a definite hole in my collection. This MUST be remedied!
lavendersbluegreen(at)yahoo(dot)com

Thank you for taking the time to read and review Satin Sheets in Space! I'm glad you enjoyed it.

I have not read any hot alien books before but i am looking forward to it.

Michelle Pillow's Lords of the Var books are lovely.

It's a toss up between Jeff Martini from Gini Koch's Alien series and any of the aliens in Gena Showalter's Alien Huntress series.