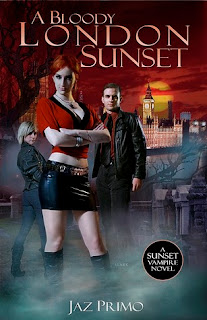 Katrina Rawlings is a vampire who has finally rediscovered happiness for the first time in centuries. But unwanted complications erupt with a vengeance. Decisions of necessity combined with dark memories from a forgotten past threaten her relationship with the love of her life. When a sacrifice must be made, can she endure her decision?


Caleb Taylor's life is finally back on track. He has rebounded from a near mortal injury, both physically and emotionally. Yet, his reality is shaken by the suggestion of a betrayal of trust from the woman he loves. Can the power of love overcome the power of a lie?


Paige Turner is a century old vampire who fearlessly revels in a simple existence pursuing blood, dancing, and sex. Simple needs, and all met in the same manner: hot, fast, and without regrets. But a spontaneous visit leads to heartfelt sacrifice, and unexpected complications strike fear to the core of her soul. Will she survive the revelations?


In the exciting second installment of the Sunset Vampire Series, a trust is betrayed, bonds of friendship are strained, relationships may end, and a tenuous neutrality among the world's vampire population is threatened. With stakes so high, some will not survive A Bloody London Sunset!

This is the second book in Jaz's vampire series, and I must admit it is quite fascinating.  He has done a complete role-reversal in the male-female normal vampire relationship that we as a reader have come to expect.  Hats off to that Jaz.  I love books that widen the scope of things.  So we have Katrina, who is a major alpha vamp.  As I stated before, Katrina could never have an alpha as a mate.  She is much too dominate and I could see her easily killing another male that constantly challenged her.  The relationship between Caleb and Katrina works because Caleb allows Katrina to be herself, and doesn't try to rein in her dominate tendencies.  But life isn't a bowl of cherries and many conflicts and sticky situations arise in this book.

Paige is a rising alpha in her own rite.  But Caleb has managed to get under her skin with his charm and understanding.  Paige has come to have deep feelings for Caleb and they make her quite uncomfortable.  She has much soul-searching to do.  Will these feelings end up costing her the people she cares for the most?

Caleb is like a beacon that attracts trouble, envy, and awe.  There is something about him that stirs emotions in these predatory beasts, that both surprises and shocks the masses.  It seems to me the author is building Caleb up to fulfill a great role.  I am anxious to dive in the third book and discover if I am right.  This was an excellent sequel with several more interesting characters added in to the scene.  My favorite is still Katrina.  I really think the author has captured the essence of what a true alpha-female would be like.  Nicely done Jaz!!