Larissa Ione was my first!

Catchy title huh?  I bet that got your attention, but its not what you think. I began blogging a year ago today.  That's right CEWTNK is officially one today and we have A lot of stuff to do and prizes to giveaway!!  But I wanted to look back at my very first review by an author whose series I had completely fallen in love with, Larissa Ione. 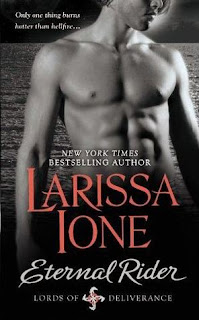 His name is Ares, and the fate of mankind rests on his powerful shoulders. If he falls to the forces of evil, the world falls too. As one of the Four Horsemen of the Apocalypse, he is far stronger than any mortal, but even he cannot fight his destiny forever. Not when his own brother plots against him....

Yet there is one last hope. Gifted in a way other humans can't-or won't-understand, Cara Thornhart is the key to both this Horseman's safety and his doom. But involving Cara will prove treacherous, even beyond the maddening dangerous desire that seizes them the moment they meet. For staving off eternal darkness could have a staggering cost: Cara's life.

Branching off from her extra steamy sex demons and Underworld General, you are plunged into a new level of hell with three new yummy fantasy creatures(and their little sister ). This twist on the biblical four horsemen sheds a new light on how the end of times could be one hot ride. Saddled up on his magnificent stead, Ares is the kind of creature that would turn even the most chaste of females to a puddle of mush, and this is before he removes his clothing. He lives up to his name magnificently, especially in the heat of battle and in passion. The book mixes together some old theories of different ancient societies and ends up blending them together nicely. Our hero has many of his own demons (literally and figuratively) to fight along his crusade to stop the Apocalypse from starting. He begins by dragging Cara in to his story to protect her but ends up with other ideas once he gets to know her. His horse adds a bit of humor to the tale and turns out to be an enchanting and lovable sidekick. This book was edgy, with its continual twists and turns, but keeps you reeled in until the ride is over. Who knew the end of days could be sooooooo hot?
I loved this book and the fact that it branched off of the Demonica series?  Even better!!  Out of all the brothers, this is the one that I would have chosen: 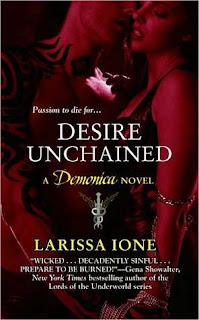 Pleasure is their ultimate weapon . . .

Runa Wagner never meant to fall in love with the sexy stranger who seemed to know her every deepest desire. But she couldn't resist the unbelievable passion that burned between them, a passion that died when she discovered his betrayal and found herself forever changed. Now, determined to make Shade pay for the transformation that haunts her, Runa searches for him, only to be taken prisoner by his darkest enemy.


A Seminus Demon with a love-curse that threatens him with eternal torment, Shade hoped he'd seen the last of Runa and her irresistible charm. But when he wakes up in a dank dungeon chained next to an enraged and mysteriously powerful Runa, he realizes that her effect on him is more dangerous than ever.


As their captor casts a spell that bonds them as lifemates, Shade and Runa must fight for their lives and their hearts-or succumb to a madman's evil plans
Shade was the perfect combination of everything for me:)  I know most girls loved Wraith, but Shade was my all time,wish he was mine book boyfriend!!  But this yummy demon came in a close second: 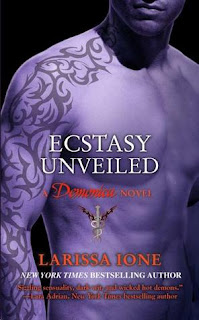 A DEMON ENSLAVED
Lore is a Seminus half-breed demon who has been forced to act as his dark master's assassin. Now to earn his freedom and save his sister's life, he must complete one last kill. Powerful and ruthless, he'll stop at nothing to carry out this deadly mission.
AN ANGEL TEMPTED
Idess is an earthbound angel with a wild side, sworn to protect the human Lore is targeting. She's determined to thwart her wickedly handsome adversary by any means necessary-even if that means risking her vow of eternal chastity. But what begins as a simple seduction soon turns into a passion that leaves both angel and demon craving complete surrender.
Torn between duty and desire, Lore and Idess must join forces as they battle their attraction for each other. Because an enemy from the past is rising again-one hellbent on vengeance and unthinkable destruction.

I really loved Lore too!!  I think I have a soft spot for the quiet hard-assed tortured guys!!  Lore fit the bill and he was horribly abused and kind of the outcast of the outcasts because of his unique abilities.  But he was my second favorite demon and now my second favorite horseman.  Than has to be second because well my first is Ares...lol..and that name says enough!!! 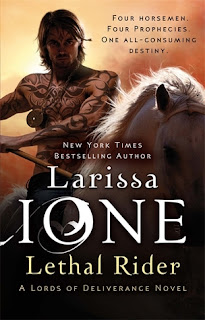 They're here. They ride. The Four Horsemen of the Apocalypse.

Born of a match between good and evil, four siblings stand between hell's minions and everything they want to destroy. They are the Lords of Deliverance, and they have the power to ward off Doomsday...or let it ride...

Thanatos, the most deadly Horseman of the Apocalypse, has endured thousands of years of celibacy to prevent the end of days. But just one night with the wickedly sexy Aegis Guardian, Regan Cooper, shatters centuries of resolve. Yet their passion comes with a price. And Thanatos must face a truth more terrifying than an apocalypse-he's about to become a father.

Demon-slayer Regan Cooper never imagined herself the maternal type, but with the fate of the world hanging in the balance she had no choice but to seduce Thanatos and bear his child. Now, as the final battle draws closer and his rage at being betrayed is overshadowed by an undeniable passion for the mother of his child, Thanatos has a life-shattering realization: To save the world, he must sacrifice the only thing he's ever wanted-a family.

For those of us who have been eagerly awaiting this book, trust me it was well worth the wait!!  I will have a review on it later this month and I am eagerly awaiting the last book with impatience and sorrow.  I hope that there will be branch offs from this series, but it seems pretty closed out.  How will I get my demon fix? What will happen to UG?  I hope this series continues, but if not it has been one wondrous  and provocative ride!!  Thank you Larissa!!

Absolutely love Larissa and those sexy demons and horseman...especially Lore and Thantos!!!! So damn yummy!!!