Review: Prophecy of the Guardian Book 1 By J W Baccaro 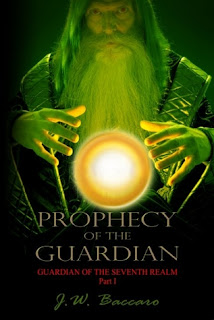 The Second Great War between the Light and the Dark has begun, and Abaddon the Demon Lord is searching for the four ancient Wizard Crystals of the Elements. Once the Crystals are in his hands, and corrupted to evil, he will destroy the forces of Light upon the earth, and transform the world into eternal darkness. But Darshun Luthais, one of the last Nasharin warriors, along with a few companions, sets out on a quest to find the Crystals first. Along the journey they encounter giant six-legged serpents, the ruthless Cullach, and other entities of darkness; yet the most challenging obstacle is Darshun's constant struggle against temptations of evil, and his vow to hold to the faith of all who are calling him the Guardian-the prophesied warrior who will bring down the Demon Lord.
Show More
Show Less

This story begins at the with the returning of warriors from a battle where their fellow men-at-arms were completely obliterated .  It is not often that a story begins with the lose of a battle, or the evacuating of an entire city.  This one however does.  The forces of dark far overwhelmed the cities forces and they were slaughtered.  The remaining few were sent back to escort the people to a new land where the young prince can go grow and rule the remainder of his people in peace.  Two of the remaining warriors were Nasharins, an ancient elemental race that had thought to have been wiped out long ago.  Mirabel was charged with delivering the news of his father's demise to the young prince and leading the way into the new lands.

Along the way, Mirabel feels the overwhelming pull of another Narsharin.  But it can't be!!  Their numbers were so few and far between!  Energy never lies and this particular sensation was incredibly strong, as from a powerful being.  Mirabel finds Seth and explains the situation to him and Seth agrees to accompany him.  They settle the people in a secure area and begin their journey to a place that is only a few hours away.  Their arrival in town is swift and they observe the activities of the evil forces within the city.  It looks as though they are preparing a ritual.  Soon enough it begins.  Mirabel is desperately searching for the life-force he felt the pull form but is coming up with nothing.  At last the sacrifice is brought forth and laid upon the alter. Mirabel looks upon it in outraged shock.  For there, nestled inside some rags lays an infant and the pull that he has been searching for.

This story is about Darshaun (Dar), the infant that was rescued by Mirabel and Seth, and the coming of the guardian stated in the prophecy.  Dar has many obstacles that he most overcome in order to grow into the man he is destined to be.  Dar has many endearing qualities such as his openness to adventure, his innocence, and his care-free way of looking at life.  He isn't your typical alpha testosterone bound hero, rushing into every skirmish to save the day.  He is very emotional and easily expresses them for all to see.  But will this boy be able to push aside his fears to become the man the world needs him to be?

This was an excellent intro into Dar's world.  There are a huge array of interesting creatures, my favorite being the Nasharins themselves, that are vividly captivating and creative.  The author has definitely gained a fan  through this book, for it was very well written.  I enjoyed my dip into this world and am eagerly anticipating the next book!  Great Read!!

Great review Nikki!
I'm a new fan of J.W.'s works. Read the series thus far and LOVED them! I'm patiently awaiting more from him. It got better and better as I went through each book. Hope many other discover his works. They really are a great escape from the everyday :)

J.W. is a new to me author. I will have to check this out!
Mel
bournmelissa at hotmail dot com

Thank you for introducing me to another great author!

A hero still young enough to not be jaded. Sound interesting. Thanks for the introduction.

Fantasy is a fav genre of mine and thanks for the intro.

Cool book got to have it.

great review, it sure to change me from all the big alpha i'm reading at the moment but it's great to change sometimes. i just hope for happy end

I am new to the author but am looking forward to reading the book.
Yvette
yratpatrol@aol.com

I love this type of book! Lord of the Rings is one of my favorites and this style seems a little darker which I think I would truly enjoy :)

I enjoyed the review and will certainly add this to my wish list.

Great review, you sum it up nicely even though it seems like there is a whole lot in this book. So glad you featured this author so I could find out about these books!

I haven't read any of JWs books and haven't read too many wizard books, but this looks really interesting!
MJ
msmjb65 AT gmail DOT com

ooh i so wanted to read this one!

I cant wait to read this series.

I'm new to this author & series, but I am intrigued. Thank you for your review.

I have not previously read this author but this sounds amazing! Would love to get my hands on his books!

great review~ i love the cover of the book and the book itself sounds like it is just the kind of thing i love to get lost in.

Great review....I'm so adding this to my wish list.