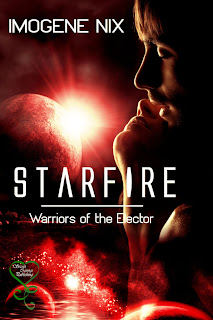 Starfire is the second book in the Warriors of the Elector Trilogy. The story of Jemma Cardnew and Raven Fraser. It is now contracted to Secret Cravings Publishing and due for EBook release in June 2012.
Jemma Cardnew is hardnosed and bitter. Even worse, she is brittle. No way does she want anything to do with the Elector and it’s crew…including the gorgeous Raven, who intrigues her.

Raven Fraser, engineer also has his problems. First, the Matrix is damaged leaving the Elector dangerously unprotected. The woman of his dreams is avoiding him and any possibility of a future together. Topping it all off Crick Sur Banden continues to be a thorn in the side of the Empire.

Jemma has orders to protect the Elector and those it carries, Raven has his as well, get the systems back online. Can passion and possibly forever bloom on the eve of the greatest war that humanity will ever face against a foe with no fear?

My Review:
So I really liked Starline, but I must say I flippin LOVED Starfire.  I was shocked that this book was going to be about Jemma.  Jemma acted a little immature towards the end of the first book, and I wasn't thrilled this particular book centered around her because I was a little miffed at the character.  The premise of the story fascinatied me so I decided to just read the first chapter.  Four hours later I am looking at the Epilogue wondering what happened to my initial attitude, and wondering why Jemma is now one of my favorite characters!!
Insight to why a character is the way they are is really everything.  Jemma was an orphaned
girl from our time, but she carried mountains of pain around with her, which drastically altered who she really was.  The carefree, careless front she projected was exactly that, a front.  The real Jemma is afraid of being hurt and rejected so she pushes everyone away.  She is uprooted from her place on our planet completely against her will and plopped into the Academy on another world in a different time.  Unlike Mellissa, Jemma is completely opposed to this change.  She hates the fact that all of her Independence has been stripped from her and that she must start all over again.  In this new world she has nothing and is nothing.  She makes plans to leave the academy and start over somewhere new when an opportunity literally falls right into her lap.  One of the professors has offered her a very coveted spot to train to be a fighter pilot.  Could this be her path to finally finding her niche in this new world?
Raven has wanted Jemma since the moment she set foot in his life kicking and screaming ...literally.  But Raven's feelings run much deeper than a few nights in the sheets.  He wants a real relationship with Jemma, but she refuses to give them a chance. How can he convince her of his true feelings without losing her forever?
Raven and Jemma are thrown together repeatedly on the Elector (the last place Jemma wants to be) and his pursuit of her begins in earnest.  But what Raven unearths about Jem shocks and humbles him.  Will he be able to take down the barriers around her heart and keep them down forever?  This book has a little of everything...bad guys, evil/good, conflict, sex, time-travel, new planets, the works!!  I am hoping the next book is going to be about Chowd.  I love Jemma but Chowd is my favorite male character.  A lot of surprises about this guy came out in this book.  I can't wait for the next installment!!  The was an excellent read!!!

I totally agree. Imogene Nix has done a great job with this book. It has everything a book needs and then more.
I will definitely be getting more books written by Imogene. She write extremely well and her characters are excellent and totally believable.

I'm looking forward to this book.
Way to go Imogene.