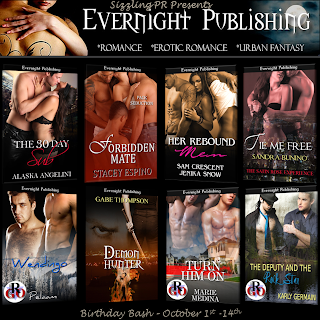 Smart and sexy contemporaries… heart thumping same sex romances… thrilling paranormals…Evernight has them all and then some! New titles are released daily, so check the Evernight website often.

Every title is 25% off until October 14th! Discount is taken at checkout.

So, stock up on the sexy!

Here’s a sample of what you’ll find… 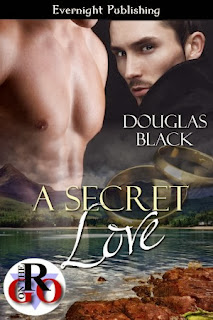 A Secret Love by Douglas Black
Romance on the Go
James is nervous when he pulls into the parking lot of the secluded and conservative Caledonian Hotel. He slips off his wedding ring, gives a false name at reception, and checks into his room.
When Mark finally arrives, James expects their time together to conform to the usual pattern, but Mark surprises him. Mark wants candlelit dinners and walks on the beach. James, well, James just wants to make up for lost time. More importantly, he doesn’t want to get caught. They have six months left before they can start a new life together and James is desperate to be discrete.
Unfortunately, he never could control himself around Mark. Throw in an interfering old couple and some very public displays of affection and Mark and James’s short hotel stay might just be about to destroy not only the secrecy that has always shrouded their relationship, but also their future together.
Be Warned: m/m sex, sex toys, public exhibition 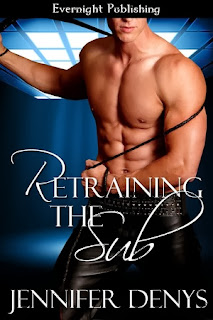 Retraining the Sub by Jennifer Denys
Battle of Wills, 1
When submissive Ann misuses her safe word once too often she is told to attend a retraining program. However, the only Master prepared to train her is hard, inflexible Luke, the man she jilted eight years previously.

Shocked to see each other at the club, but stunned at how they’ve both changed, Ann has to be trained by Luke, or leave. It becomes a battle of wills to see who will lose control—the battle being about trust. Can Ann give up control and trust a Master? Can Luke trust Ann not to run away again? The emotional victory for each battle flies back and forth between them. Who will ultimately win? 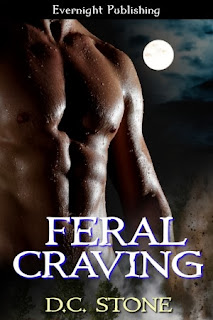 Feral Craving by D.C. Stone
Bari has always felt a presence lurking deep inside of him, waiting to get out.  After being injured in Iraq, he suddenly finds himself thrust back into his hometown, forced to face his past. He finds that what’s lurking inside of him is real, waiting, and running out of patience fast.
What happens as the evil of his past merges with his wants of the future?  What happens when the man and beast inside crave a female from his past?  What happens when Bari learns that he is anything but human?
Be Warned: light bondage, anal sex

Congrats on three years! So many wonderful books have come out and best wishes for many more to come.

Happy Birthday to Evernight!
Thank you for sharing some books, Nikki! :)

Happy Birthday Evernight!!
Congrats on making it to the 3 years mark. I look forward to the years to come.