How about a Rocking Anthology for just $0.99? 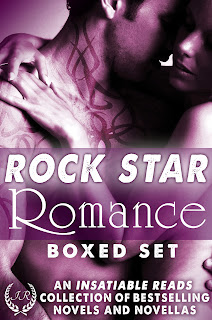 From sinfully hot guitarists to wildly aggressive, dominate heavy-metal rockers, these are the bad boys of the music industry. This special collection brings you 12 of the hottest rockstar romance stories ever told from many of your favorite authors – all for just $0.99 for a very limited time! (Regular price $9.99)

Now get a DOZEN novels and novellas all featuring deliciously naughty rock stars by the hottest New York Times, USA Today, Amazon and Barnes & Noble bestselling authors in the rock & roll romance genre all together in one amazing boxed set.

So bring your lighter and get ready to toss your panties on stage!

Warning: This special offer is available for a limited time only!

MEETING TROUBLE by Emme Rollins - Sabrina can’t believe her luck—she’s always dreamed of front row seats to see her favorite band, “Trouble,” but when she bumps into lead singer, Rob Burns, and he invites her backstage, she finds herself hoping her luck doesn’t run out—and that maybe, just maybe, all her dreams will come true. (Note: This was originally published as “Happy Accident.”)

ROCKED: DEX & BECCA by Clara Bayard - With music in her blood, Becca’s new job with Dream Defiled is a chance of a lifetime. But the irresistible pull of troubled bass player, Dex, raises the stakes for the plus-size beauty, and could be the start of something wonderful, or the end of everything she’s worked for.

HARD ROCK ARRANGEMENT (THE LONELY KINGS, #1) by Ava Lore - Chronic loser Rebecca Alton lands a job as the fake-girlfriend (read: 24/7 babysitter) of the music world's current heartthrob and wild child, Carter Hudson, but it's Kent--her boss, Carter's older brother and bassist for Carter's band--that catches her eye and the ensuing white hot attraction may just be too much to keep under wraps!

ROCKING HER CURVES by Aubrey Rose - When rock star Asher meets Trixie, he's smitten by her curves - but she's the lead singer for his opening band: strictly off-limits. Then their paths collide - literally! - and they're forced to look temptation in the face...

ROCK & ROLL CURVES by D. H. Cameron - Darcy loved rock & roll but she never thought she could attract a rock star until Gage Tucker, lead singer of Dark Fire Love, walked into her life and proved that some men, even rock stars, love a girl with curves.

MAROONED WITH THE ROCK STAR by Dawn Steele - Rebecca Hall never thought she would be marooned on a deserted island with the guy she hates most in the world, gorgeous rock star Kurt Taylor, until the fates throw them together to sink, swim or perish.

ALL ACCESS (CHASING CROSS BOOK ONE - A BROTHERS OF ROCK NOVEL) by Karolyn James - Chasing Cross lead singer, Johnnie, has a major career decision to make and it doesn't include meeting a woman who doesn't know who he is... and it definitely doesn't include falling for her and turning his rock star world upside down with romance.

NEW SENSATION & RUN TO YOU - CURVES FOR THE ROCK STAR 1&2 by Clare Cole - Down on her luck and working two jobs to make ends meet, curvy redhead reporter Amy Reid's life is turned upside down when she is swept off her feet by international rock superstar Rick Borrell.

THE ROCK STAR AND THE GIRL FROM THE COFFEE SHOP by Terry Towers - Hanna is small town girl just trying to make a living serving coffee at the local coffee shop, but all that changes when a car accident brings rock legend, Bo Savage, into her life. She quickly comes to realize that being the girlfriend of a rock star is harder than expected as she's pulled into a world of sex, drugs and rock and roll.

CURVY GIRLS ROCK by Virginia Wade - From the moment Brandi and rocker Ax Stevenson meet, sparks fly and libidos explode, as they find themselves hopelessly attracted; yet, in this climate of self-destruction, lust, and insanity, can two soul mates find the courage to surmount all obstacles and be together?

ROCK HARD by Adriana Hunter - When they meet face to face, sparks fly, and the room is charged with electric, undeniable heat. A mixture of pain and pleasure, where history means something and instant attraction is remembered and perhaps rekindled. Can Gage look beyond the past and ever see Kate as anything but a cold heart-breaker who abandoned him?

This TWELVE book collection of rock stars and the women who can't resist them features stories from best-selling authors including USA Today & New York Times best-sellers. This is a deal you can’t pass up!

Karolyn James is a bestselling romance author, selling over 100,000 ebooks spanning several genres.
Her rockstar-romance series, Brothers of Rock, has recently been extended through 2014 with five books following a new band, Fallen Tuesday. The original series following Chasing Cross is now available in the first five books.
Under the pen name Claire Charlins, Karolyn has topped the Western, Historical, and Contemporary Romance charts with the Mail Order Romance series.
Recently announced, Karolyn James is the author behind the bestselling Coming of Age and New Adult name, London Casey. Her The Boys of DownCrash trilogy is now available and look for an upcoming New Adult Romance trilogy coming Fall 2013!
Visit Karolyn on her site at www.KarolynJames.wordpress.com. Follow her on Twitter @KarolynWrites. She’s most active on her Facebook page at https://www.facebook.com/KarolynJamesAuthor. You can also stay up to date with Karolyn through her mailing list here – www.tinyurl.com/KJSignup.
Karolyn enjoys interacting with her readers, so be sure to contact her via Twitter, Facebook, her blog, or even email her at KarolynJamesWrites@gmail.com.