Review and Giveaway of Soulstone by Katie Salidas 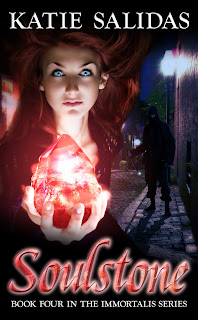 Blurb/Synopsis:
It’s a desperate time for rookie vampire Alyssa, and her sanity is hanging by a slender thread. Her clan is still reeling from the monumental battle with Aniketos; a battle that claimed the body of Lysander, her sire and lover, and trapped his spirit in a mysterious crystal. A Soulstone.

Unfortunately, no amount of magic has been able to release Lysander’s spirit, and the stone is starting to fade. Weeks of effort have proved futile. Her clan, the Peregrinus, have all but given up hope. Only Alyssa still believes her lover can be released. In despair, Alyssa begs the help of the local witch coven, and unwittingly exposes the supernaturals of Boston to unwanted attention from the Acta Sanctorum.

The Saints converge on the city and begin their cleansing crusade to rid the world of all things “Unnatural.” In the middle of an all-out war, but no closer to a solution to the dying stone, Alyssa is left with an unenviable choice: save her mate, or save her clan. 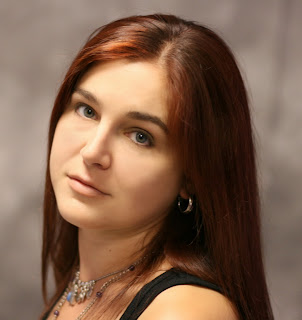 Another great read by Katie!  This one starts off exactly where Pandora's Box ends, so you really need to read the books in order.  Alyssa pretty much throws out her all trying to get Lysander's soul out of the soulstone and back into his body.  This book is loaded down with twists and turns which involve witches, pack alphas, and of course the Acta Sanctorum.  It just wouldn't be a party without those unlovable characters..lol.  If your looking for a high paced jaunt throughout a new and exciting paranormal world, then you need to take a look at this series!!  You won;t regret it!!

JR Ward definitely, and I love Zsadist and Vishous <3