The Beach House By: J.T. Harding 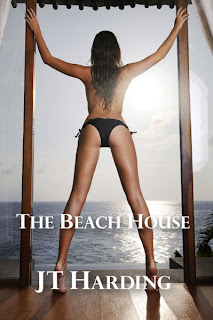 An abused wife finds there is escape, and the happiness she believes could never be hers. Jenni Adams has strayed before. Two years earlier it was with a young man she could not resist. Now her attraction to the young couple staying in the Beach House will trigger events more climactic and final than she can imagine. Kim and Joe Fransiscus are rediscovering each other following the birth of their daughter. The vacation is meant to be a chance to relax, but the beautiful woman who comes to swim from the house next door attracts them both. When Kim teases Joe with a hint of her interest events take a new turn. For Jenni’s husband Mark the years keep getting tougher. His business is failing, his marriage with it, and Mark has no idea what he can do to save them. His frustration emerges as violence, a violence that turns against more than his wife, because no one is going to take his property from him. The Beach House is a story driven by lust, sensuality and anger. Three individuals make a decision to stop fighting their desire. A fourth can no longer fight his compulsion to strike out. Warning: Includes scenes of lesbian sex, masturbation, mild bondage, anal sex, group sex, breast feeding, lactation and jellyfish.

How many times have you looked at a couple and thought..Why?  Why would she put up with that?  The answer often varies and more often than not its unpleasant.  The same goes for our Cinderella.. ..Jenni.  Many of us spend our lives being afraid of our own desires or being made to feel ashamed of them because they are not what society deems as normal.  What is the meaning of that horrid word anyway? Jenni is no different.  Being ashamed of herself and her reputation she tries to change it and herself by marrying someone who is her opposite.  Too bad that it ended up being a really bad decision.  It gets worse as Mark tries to turn the only thing that Jenni holds dear against her and begins to beat her.  So, she loses herself in her job and her swimming...the only real escape from her reality.  She wants to run away from her marriage but she feels beat down and deserving of her circumstances. Then she comes across her idea of the perfect couple and her whole life changes.  Most times our adult fairy tales are quite different from our childhood ones, as Jenni soon discovers when things heat up between our little menage.
This book is about being true to yourself and following your desires, even if they are quite different than those of the general society.  Jenni was a  real lifelike and likable character faced with real problems.  Even though many people in her situation don't get a fairy tale ending, or even close, our Cinderella becomes the heroine in her own adult fairytale.  Which just so happens to involve silk ties, sex, and jellyfish! This was a really good read!
Posted by Unknown at 6:43 PM

It is indeed very true sometimes we just got to screw society and just don't care what other people thinks..be happy,content and proud of who we truly are.I like your reviews keep up the good work! the jellyfish intrigues me lol ^_~

I'm a new follower
feel free to drop by
http://kimyunalesca.blogspot.com/