Giveaway and Review of Heat Wave by Taryn Kincaid 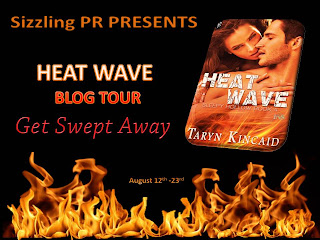 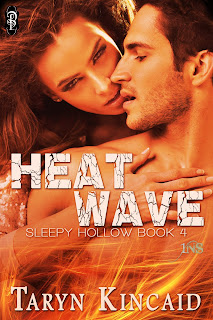 Get Swept Away
Sent into the human realm to retrieve prodigal princess, Zena Night, Bhyrne Raines is shocked and unprepared for his carnal reaction to the sexy succubus. In service to the succubus queen, the rugged enforcer must stifle the instant passion exploding within him. Fulfilling his royal duty doesn't allow for quickie dalliances. His biological clock is ticking, and he begins to enter breedspawn, an intense and unstoppable frenzy of mating all fire-demon males must endure. But the more he wants to avoid Zena, the more he's drawn to her.
Reluctant to give up her carefree life of partying among the mortals when the hot-as-sin Bhyrne comes to fetch her for the queen, Zena uses her succubus wiles to entice him, or at least delay the inevitable trip to the royal court. Once in the demon stronghold, hidden deep within the Catskill mountains, she learns the reason for the summons: she must choose a consort within two days.

About the Author:
Taryn is an Olympic caliber athlete egg roller and spends a great deal of her time petitioning the U.S.O.C. to introduce a fantail shrimp competition. When she's not bungee jumping off the Palisades or parasailing up and down the Hudson River, she devotes her time to caring for her aging pet walrus, arranging her voodoo doll-pin collection and practicing rhythmic chants. At this moment, she is busy sweeping up the loose masala chai tea leaves she spilled all over the kitchen floor. (Probably because she needs COFFEE.) Wait. Is that something…sparkly?

Taryn hangs around a lot on Facebook and Twitter with her trillions of fans and pops in at Goodreads from time to time. You can catch her on her website, http://tarynkincaid.com, and her blog, http://dreamvoyagers.blogspot.com where she lives for comments! She implores you to buy her books so she can retire.

Excerpt:
Holy freeze gun, Batman. The words died before she managed to expose them to air. Her mouth snapped shut.
One of the Queen's guards stood before her, huge and tall, nearly twice the size of most of the other males in the joint, a hella hunka supernatural male. Clearly not human, although Hugo Boss'd to his Adam's apple in an apparent bid to fit in among the humans trolling for hot sex, illicit drugs, watered-down booze and loud music. Beneath the fabric of the unstructured designer suit, the toned muscles of a demonic warrior rolled like tidal waves. Even without the small lapel pin the uninformed might mistake for the The Rolling Stones' logo, she'd recognize him for a captain of the guard. Maybe the Queen's own Captain.
Hellfire and cotton candy. Trouble. T-R-O-U-B-L-E.
But, by the goddess, whattahottie! Despite her certainty that his presence in the club corridor boded ill for her, the force of her sudden hunger shook her.

A desperate bolt out of the blue.

Instant connection to him on the paranormal plane, as if he'd wrapped her aura in gold chains and tugged her to him. But did that fast lane to heaven run one way or two?

A grim expression straightened the lines of what otherwise might have been a generous, sensuous mouth. A military buzz cut had weed-whacked hair the color of iron. And it didn't stop there. Without doubt, metal fortified every single cell in the massive male's body, pure titanium flowing in his veins. The stern planes and angles of a hard-edged, swoon-worthy face set grimly as cement. Though he lounged in the hallway like any Archie or Jughead waiting in line to discharge his rented beer in a urinal, he exuded authority, his carriage and bearing such that he made the others look like a pack of Twizzlers. Oh. Yeah. More than a mere guardsman, she guessed. An enforcer.

Well demons and Madam Eve's One Night Stand Series?  What a perfect combination for a before bedtime read!  Bhyrne is sent on the distasteful task of fetching a royal succubus home for the queen.  This stoically HOT enforcer has a body built for sin and Zena is licking her lips about the prospect.   But time is short for both of our sexy demons.  Can Madame Eve pull off the One Night Stand that might save them both?  This was a great short, creative little story that was infused with the author's unique quirky humor.  She brings a smile, even while she's heating it up in the bedroom!!

Taryn is giving away a copy of an ebook from her list of titles to one tour wide winner. Code: a Rafflecopter giveaway

Thanks for the great contest. Your books look amazing.
debby236 at gmail dot com

I would love to win one of your books. michelle_willms@yahoo.com

This looks so good! Thanks for the giveaway!
suz2(at)cox(dot)net

I love the cover. Gotta get this book.
Mel
Bournmelissa at hotmail dot com

This book sounds like a fabulously hot read! kbinmich@yahoo.com

Thanks so much!
-Amber
goodblinknpark(AT)yahoo(DOT)com