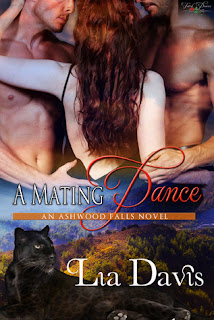 Senior enforcer, Cameron Nickels has found her perfect mate. Blaine Andrews, leopard Pack Marshal, is strong, dominate, loyal, and passionate. He knows all her strengths and weaknesses—not to mention her pleasure points. Cam’s known Blaine most her life, but she’s always felt like something was missing and her jaguar refuses to fully accept him. Yet, she can’t walk away from him. When architect and sexy mountain lion shifter, Graham Griffin, comes to town to design the new den nursery and school, Cameron finds herself in a mating dance that throws her and her jaguar into flight mode while Blaine must decide if he can not only share his mate, but welcome another.
After his lover walked out on him a year ago, Graham has no intentions of entering another relationship any time soon. But he realizes that the fates have other plans for him when he meets Blaine and Cameron. When his ex-lover’s children are chased into Ashwood territory by a group of rogues, he discovers the male he shared a life with had died freeing the kids from the Onyx Pack. Graham must work side-by-side with the two enforcers to uncover lies from the past while his heart opens to his true mates.
Warning: Contains one-hot headed leopard, a man who thought he’d lost it all, and a woman who is about to rub up against both in the best possible ways.

This was an excellent read!  My first taste of Lia Davis and her Ashwood Falls shifters has made me want more.  I came into this series in book 2 and had zero difficulties following along.  I actually plan on reading the other two books, just to see how much more information I'm really missing.  The story was so well written, you really didn't feel as if you had missed anything.  Usually in series, a couple will stand out so you know their story is what is missing, but it doesn't seem that way in this book.  It makes this series all the more intriguing.

The premise of the story was in itself fascinating.  You have Cam and Blaine who are both very alpha in their own rights, but Cam has been refusing to mate completely with Blaine.  Something seems to be holding her back, and that something has just landed himself in Ashwood Falls for a job.  Shockingly enough, neither of them can seem to resist Graham, even though Cam tries to fight it.  Blaine makes the first advance, which stuns Cam.  The funny thing is Graham has never been attracted to a female, let alone pursued one.  It all makes for quite an interesting situation.

The sex scenes were hot and popping.  Especially the ones that were just Blaine and Graham.  The menage scenes were completely yummy and will have you wishing you were Cam.  The ongoing action inside the story was quite fascinating as well.  It seems the rogue Onyx pack has been kidnapping children and other shifters and holding them hostage.  The real mystery is why, along with the fact you have a separated mated pair battling it out on opposite sides.  The story-line is quite fascinating and draws you in.

As for me?  I have singled out Keegan and cannpt WAIT for his book.  Keegan is Blaine's father and the head Alpha.  All that power just makes him sexy as hell!!  I really enjoyed a dip into this author's world and can't wait to come back for more!!!

Thank you so much for the wonderful review. I'm so happy you enjoyed.