Giveaway and Spotlight On: Seduced by Cari Quinn & Taryn Elliot 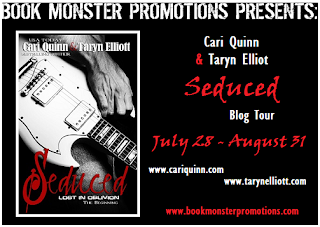 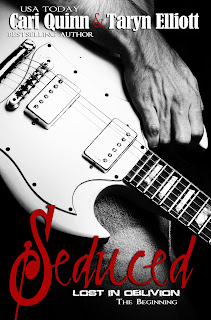 SEDUCED
A PREQUEL to the NA rock star series Lost In Oblivion.

Warning: get ready for a testosterone overload. The guys are in the driver's seat in Seduced - and the ride's gonna rock.

Twenty-three year old Nick Crandall has one focus in his life: Oblivion, the band he formed with his best friend Simon Kagan. With gigs coming up and the band members lacking focus after losing their drummer to rehab, they're out of ideas. Until Oblivion's bassist, Deacon McCoy, poses a surprising suggestion.

Bring in someone new. Two someones.

One You Tube video gone viral later, Oblivion is poised on the brink of stardom. With their new hot drummer chick — who comes in a package deal with a talented guitarist who happens to be head over pick in unrequited love with her - it seems like everything's falling into place. Or will the band Nick and Simon have fought to keep together disintegrate before their eyes?

Four guys & one woman + more success than they ever bargained for = trouble, of the sexiest kind.

Get Seduced by this novel-length introduction to the band Oblivion. This preview occurs before the four forthcoming books about each of the band members. Sometimes getting lost means finding yourself...

Add to your Goodreads Shelf: http://www.goodreads.com/book/show/17454336-seduced

Excerpt:
“The only way I’m sending you to bed is if I’m coming with you.” Her teeth found his earlobe, and she bit down hard enough to make him wince. And strain against the confine of his jeans. Frayed seams and Jazz Edwards were not a match in heaven made. “Can we please stop talking now?” Her tongue licked its way into his ear. “I’ve got something else for your lips.”
“Jesus Christ.” He finally glanced over his shoulder. Alcohol had never gotten him as drunk as just one glance into her sultry eyes. “If you need to call someone to let them know where you are, better do it now.”
That was her last chance to go home. Then he was taking a match to his Scout uniform.
Defiantly, she reached down and withdrew her cell from the bag at her hip. She made a show of turning it off, then tossed it in the general direction of the bushes. Guess she really did not want to be interrupted. “As you were saying?”
Swallowing hard, he looked down and laced his fingers through hers. His other hand fisted around his guitar. “I might bruise you for real this time. On purpose.”
“I might like it.” She squeezed his hand, and hell if he didn’t appreciate her trying to reassure him. Why this felt so huge, he didn’t understand. She was just a woman he barely knew.
Just a cog that fit really well already into a wheel he’d begun to believe might be irreparably broken.
“Bruise me, Nick,” she murmured when he didn’t speak. “Use me to forget. Just like I’ll use you.”
It really could be that simple. She wasn’t looking for him to call her tomorrow, and he wasn’t offering to be her man. He wasn’t fit to be anyone’s guy, not now.
But he could be for an hour, maybe two, and that would be enough.
Without saying anything further, he released her hands and stepped back to hook an arm around her waist, hauling her into his side. He brushed a kiss over her temple as they strode toward the basement entrance. “The minute I shut that door behind us, I want your skirt and panties off. Understand me?”
She shuddered. “Yes.”
“What’s off-limits?” When she didn’t respond, he jockeyed his guitar until he could seize her chin and yank her face closer to his. “Jasmine. What’s off-limits?”
Her gaze seared into his and left him smoking. “Nothing,” she whispered. 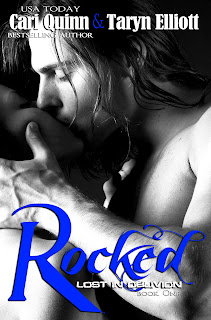 Offstage he’s the Peacemaker, the mastermind who keeps his volatile band from imploding.

Opening for their idols on their first ever tour, Oblivion is living the dream. That dream becomes a nightmare when Oblivion draws more attention than the headliner and egos clash. Frustrated at being shoved out of his mediator role by their new manager, Deacon McCoy loses himself in brutal workouts only coming up for air long enough to refuel—and that means hunting down the catering truck at odd hours.

Especially the deliciously cute chef who excites his taste buds as much as his body.

The child of roadie parents, Harper Pruitt has heard every pickup line twice. To her, musicians are one step above the scraps on her cutting board. All she wants is to get enough experience to run her own catering company, but Deacon and his bottomless and surprisingly gourmet stomach is too tempting to resist. Before long, she finds herself wanting to experiment with him outside the kitchen.

When Harper sees that Deacon’s sense of responsibility is doing him serious damage, she realizes he’s far from the typical rock star. But as the band's fame grows, she wonders if she can love a man who doesn't know how to let anyone in—even her.

You met Deacon McCoy in SEDUCED, now you can watch just how far a big man can fall.

Add to your Goodreads Shelf:http://www.goodreads.com/book/show/18140422-rocked
LOST IN OBLIVION Website:  http://www.lostinoblivion.com 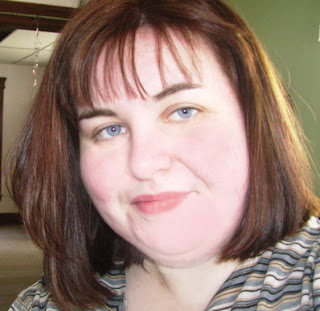 BIO: Cari Quinn
USA Today bestselling author Cari Quinn wrote her first story—a bible parable—in 2nd grade, much to the delight of the nuns at her Catholic school. Once she saw the warm reception that first tale garnered, she was hooked. Now she gets to pen sexy romances for a living and routinely counts her lucky stars. When she’s not scribbling furiously, she can usually be found watching men’s college basketball, playing her music way too loud or causing trouble. Sometimes simultaneously. 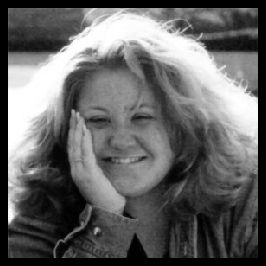 BIO: Taryn Elliot
I'm from the great state of New York--upstate NY, thank you very much. My family consists of a brother who takes care of keeping the snarky side of me alive and a dog that is more spoiled child than mutt. My writer-friends are the glue that keeps my crazy ideas more in the sane category, and my non-writerly friends are the reason I'm not a complete hermit. I can't go a day without laughing and I truly do fall in love with each and every one of my leading men as I write their book. Music is life and every story has its own soundtrack.

7/28- Miscellaneous Thoughts of A Bookaholic
http://miscellaneousthoughtsofabookaholic.blogspot.com/

7/30- Reading Between the Wines
http://www.readingbetweenthewinesbookclub.com/

8/03- Ramblings from This Chick
http://ramblingsfromthischick.blogspot.com/

8/05- Inside the Pages of A Book
http://www.insidethepagesofabook.blogspot.com/

8/07- Why I Can't Stop Reading
http://whyicantstopreading.wordpress.com/