Review: A Demon and Her Scot by Eve Langlais 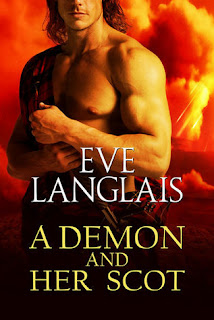 An unlikely duo, the golfing match from Hell, and a devil determined to win, even if he has to cheat. Lucifer’s up to his matchmaking mischief again in this fast-paced, humorous jaunt into the bowels of the pit. Think you can handle the heat?
“Fetch me a Scot,” Lucifer commands. Sounds simple, except the skirt-wearing jerk won’t cooperate. But Aella isn’t one to give up. Willing or not, she delivers her target to the Lord of Sin. In retaliation, the much-too-sexy Scot has Aella assigned as his bodyguard for the golfing match from Hell.
One shot ruined Niall’s life. A second shot could help him regain it. Niall sold his soul once to win a lady’s heart only to end up betrayed. Does he dare take a risk and give love a second chance?

The series has been just fabulous!!!  You continue to follow Lucifer in his newest task of mating his downtown favorites. Niall was full of natural talent in a game he much loved.  Still he sold his soul to Lucifer in exchange for the winning shot that would secure him the future he longed for.  This fated shot gave him lands, a title, and the bride he was already in love with.  What more could a man ask for?  Until a plot is uncovered that sours him to women and life in general.

Aella was tricked and cursed, all because she had no idea WHO she was really jumping in bed with.  Horrified by her new appearance, she strikes a deal with the King of Mean.  She never looks back or regrets her decision, even when her boss sends her after a dirty Scot.   And by dirty, I'm talking needs a bath..and boy does Aella give him one!  One of my favorite scenes in this book, where she practically drowns him and out pops the soap and knives to finish off his cleaning.  It was hilarious!!

Eve has a unique sense of humor that tickles my funny-bone every time!  Her brand of funny is twisted through-out her tales and in no way distracts from the hottness.  Because those sex scenes are smokin!!!
Aella was a ax-wielding, tough as nails female after my own heart!!  She always gets her mark and this job was certainly no different...even though things changed once she bathed him.

Ans at last!!  The wait was over!!  The golf-game was on!  The King of Hell against his brother!!  Chalk this up to not only a great series, but a hilarious one!!

I love this series and can't wait to read this book! I haven't been disappointed in any of Eve's books (and I have read almost all of them)! She definitely can write some funny, sexy stories :)

I love Eve's books. So glad she has another good one. Thanks for sharing!