Dark is the Night By: Brindle Chase 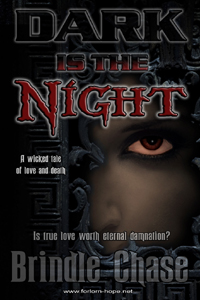 Katherine Wells is Cleveland’s top homicide detective and she’s hot on the trail of the Antoinette killer. The string of burnt and beheaded bodies have little in common, except they keep turning up. In search of clues, she encounters Alexander. His intoxicating old world persona captivates her and she suddenly finds herself in a torrid love affair. The passion is overwhelming and her sense of law falls into blissful chaos.
As an elder vampire, Alexander struggles for anonymity in the modern world. Killing isn’t personal; it’s to prevent them from becoming the undead. His kind can’t be discovered. With Katherine’s investigation getting too close to the truth, the other vampires demand he eliminate Detective Wells.
Katherine discovers Alexander’s supernatural secret and he learns Katherine’s the detective he must silence. The revelations are shocking. He’s everything she ever wanted and everything she stood against. Torn between a love like no other and the law she’s sworn to uphold, she must choose. Against time, the police and the other vampires, they must destroy the evidence she’s collected and join the undead.


Katherine Wells was you typical detective.  Hard ass, no crap taking, married to the job, with no time for any messy entanglements like relationships.  It wasn’t that she didn’t like sex, she just didn’t get men. Even though she was surrounded by single guys at the station, she stuck to the rules and never encouraged an at work romance.  Her ideas of right and wrong were nailed firmly in place with no room for any grey area.  She loved her partner, her job, and settled for one night stand contentment versus happily ever after.  At least until Alexander walked in and rocked her world with a look that literally caused a liquid reaction.
Alexander was a thousand year old vampire who, while life was thoroughly entrenched on the boring side, continued to exist.  He was a predator, hard, coarse, and devoid of all emotions except for hunger.  For blood that is.  Any sexual stirrings had long ago been erased, except for the occasional need that haunted him around the holidays.  Even then it was a means to an end.  He had full control over all of his bodies functions, as he was able to pump his own blood throughout his body, so sex wasn’t really that big of a deal. At least until he spotted Katherine at the bar. To make a long story short, we’ll just say he wasn’t making his blood engorge any parts!
While I appreciate creativity in trying to make vampires different, or more new age, I’m a sucker for the vampires that I grew up with.  The cold calculating predators that make your blood run cold and a shiver run up your spine.  The idea of a being whose sole  intent is survival until that one person comes along and melts the ice that has rapidly encased his soul, calls to something inside of me.  I wasn’t, however, thrilled will the weak kneed virgins that were garbed in some medieval wedding dress begging them to turn them all the while crying and sobbing.  Yuck.  I like my heroines with sass and balls and Katherine won me over.  She was an amazingly efficient cop who was very reminiscent of how a real woman in today’s world coped with being over 30 and single.  They settle for the one night stands to ease their sexual frustration and bury most hope of being in a long term relationship that starts screwing with their dedication to their job. I was sucked right into this story and couldn’t put it down!  I really enjoyed the read!!  This book was provided to me free of charge by Siren Song Reviews for an unbiased opinion.
Posted by Unknown at 1:17 AM

Thank you for the wonderful review. I'm so glad you enjoyed Dark is the Night!